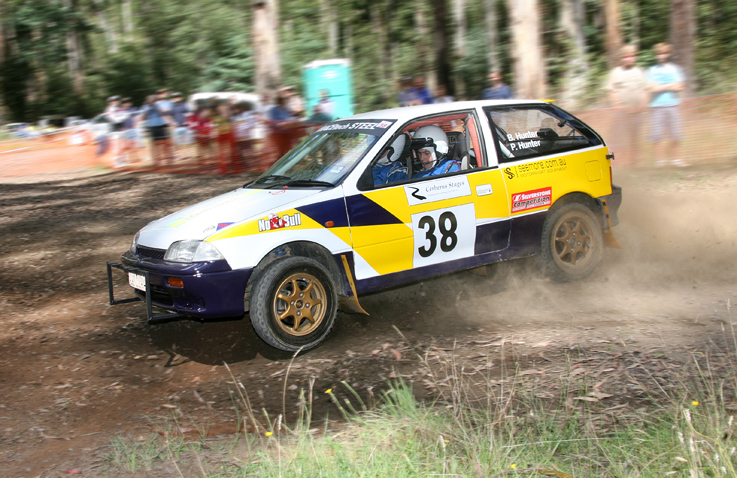 Text Bill and Patrick Hunter. Handycam mounted onboard the Suzuki  Photos and captions: john doutch photographix  This email address is being protected from spambots. You need JavaScript enabled to view it. Cerberus Rally
jceFunctions.initEditorMode('fulltext');Bill Hunter, and his son, Patrick drive in the Victorian Rally Championship Round  Friday, March 14, 2008 8:50 AM The last rally we did (in the same area) was the Yakerboo Rally in 2007. To get to the Cerberus rally this weekend, we have a long drive from Jan Juc on the Surf Coast of Victoria, across the city of Melbourne, through the suburbs of Pakenham, and then eventually (after 3.5 hours or so) we arrive in the beautiful rolling hills of the Neerim area. It had been a long summer of preparation with our little Suzuki. New tyres, harnesses, alternator, wheel bearings, bumpers, bonnet (the latter as a result of some minor altercations with the shrubbery over the last few years) had all stretched the budget considerably without yet having started the season. Add to this the costs of racing suits, boots, gloves etc required for VRC events meant that we were going to have to get some serious enjoyment out of this event to make it all worthwhile. Arriving at rally HQ at Neerim on a sparkling mid-summer morning, we unload the car onto the lush green grass of the footy field, and I am in the usual sensory overload driven by the sounds of WRXs and EVOs with their bumpy idles, and the ever-wondrous smell of racing fuels.
The rally bug is re-ignited.
One of the nicest things we like about this rally is that it is all road-booked. We do not have to plot maps before we start, or worry about pace notes - since these are banned anyway. Hence, after driver's briefing we are at leisure to lounge around in the sun, enjoy a barbecue put on by the local ladies auxiliary, and gaze at some of the interesting cars competing. These include an expensive looking Porsche Carrera (RS - I think), and a Saab 99 EMS - so evidently Walter Rohrl and Stig Blomqvist have decided to show up today, which is nice of them.
Eventually we get underway, and I spend the first 2 stages going much too slowly, but cautiously adopting my usual strategy of trying to build up some more speed as the event progresses. Patrick tells me to pull the finger out, and we have a "moment" on a straight dirt section on stage 3 which nearly ends in disaster. "Good save Dad!" - Patrick yells at me through the intercom. Patrick is having to yell as we are having intercom problems, which we sort out by stage 4.


Anyway, by stage 4 things are starting to come together a bit more, and we are starting to really progress through the field - ie moving from last place to say about 4th last place! It is always a bit of a challenge with the Suzuki - our 1.3 litres and 85 kW of power is never going to get us near the top 10. In fact top 20 would be good!I try to drive the remaining stages as hard as I can, and perhaps by about SS8 and SS9 I am going as fast as I can.

When I look back at the stage times later, I am pleased to see that SS8, SS9, and SS10 I have driven about 20-40 seconds faster on each than the same stages (which were SS1, SS2, and SS3) earlier in the day.So we finish the day with the car in good shape, and having finished 24th outright (from a starting field of 44), as well as being the second novice crew home. We do a little better than 2 years ago when we were 26th outright in the same event. We are hoping the latter points we score will keep us competitive in the Pedders suspension novice cup which is run over the full course of the Victorian Rally Championship this year.