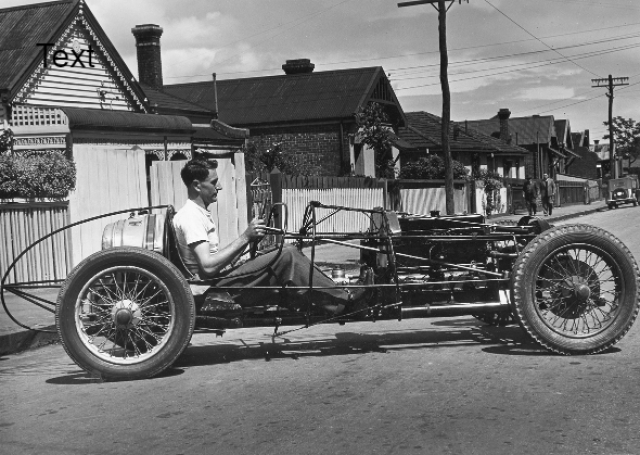 The Seeliger Vauxhall was built by Ern Seeliger in 1949-1950. It used a 1930's Vauxhall 14 / 6 cylinder engine bored to 2 litres with 3 zenith downdraught carburettors, Lancia Lambda gearbox and a modified Ford SV differential with a homemade DeDion rear suspension based on Citroen light 6 components and torsion bars. The front suspension was a transverse leaf independent setup and used again a Citroen light 6 rack and pinion steering arrangement. The chassis was a twin tube ladder type and the car used Lancia Lambda wheels and mechanical brakes. The Seeliger car is detailed in Hank Van Flink's Racing Cars and Hot Rods of the World.
Ern hillclimbed the car with only a body tube framework without a body and then sold it to Rod Kitto in Victoria, who completed the body. From the Ern Seeliger Vauxhall 14 the Monza was developed by Molina and Massola. The Monza used the basic running gear from this car and shortened the chassis, added an x shaped crossbrace, added a Grey Holden with a repco head and supercharger.   Photographs by the late Dacre Stubbs
Tweet
View the embedded image gallery online at:
https://www.motormarques.com/news/melbourne-desk/item/551-seeliger-vauxhall#sigProId2c121a6c84