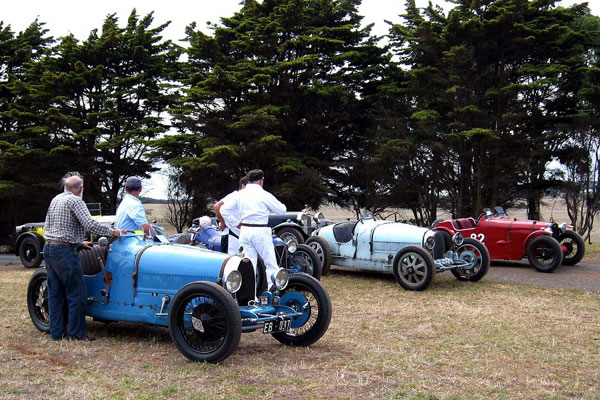 Text and Photos: Martin Stubbs Dacre Stubbs Collection
Bugattis at the Island
We have just experienced a wonderful 'Phillip Island Classic'. This is an annual event, this time including the Cowes Cavalcade to celebrate the 80th anniversary of the first Australian Grand Prix. For those who don't know, Phillip Island is located 1 1/2 hours driving time south east of Melbourne and was the site of a Grand Prix in 1928. In those days competitors cars had to be lifted aboard a ferry to get to Cowes, the main town on the Island. The 10km rectangular track used dirt roads adjacent to the Cowes township and the event was won by Captain Arthur Waite in an Austin 7 prepared specially by the factory in England. A holdup at the start of the Cavalcade. In the foreground of our lead photo  is Tom Roberts' 1926 Bugatti Type 37. This car, chassis No: 37146, arrived in Australia from London in 1926 and competed in various event driven by Dudley Barnett. The car later achieved an excellent second in the 1929 Australian Grand Prix driven by the second owner, Reg Brearley. After a number of other owners Tom purchased it from Ian Ferguson in 1958 which makes it 50 years in his ownership. Behind Tom's car is the David Hands Bugatti.


The Cowes Cavalcade was assembled on the Saturday, the middle day of the three day historic motor racing celebration, in a special display area adjacent to the current Grand Prix circuit. Eighty historic racing cars gathered, representing the type of entries which would have been present at an early Australian Grand Prix. Mid-afternoon the cars departed with a police escort to control the intersections on the public roads. We did 1 3/4 laps of the original circuit, urged on by waving groups of the island's residents and tourists, before entering Cowes main street which was closed so the Cavalcade could park, this allowed visitors to mingle amongst the cars and talk to drivers.

For those of us that appreciate vintage and post vintage racing cars, to be in the company of five Bugatti GP's was a rare treat. To be followed by the David Hands' Type 39 and being able to listen to the mechanical symphony, brought back memories of riding as a child in the Peter Dale Type 51A in the early 1950s.
Tweet