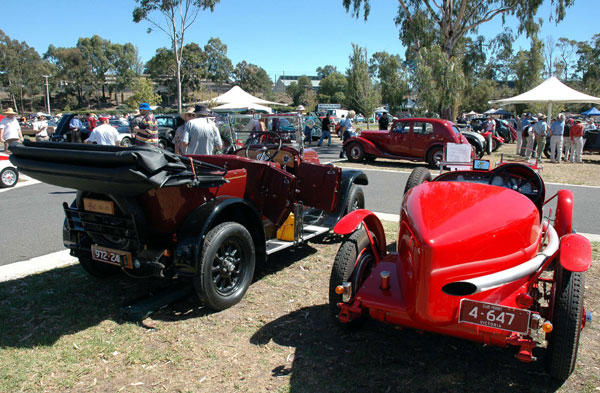 This event has been known in previous years as the British and European Motoring Show. As the new title
suggests, it showcases Classic and Vintage cars which were historically associated with Northern Europe. Event
sponsorship is by the RACV and organized by the Association of Motoring Clubs, the body representing the numerous
car clubs in Australia. The venue this year was again the Flemington Racecourse, the gates being opened to the public at
10.00 am with trophy presentations in various categories at 2.30 pm.

Under a cloudless sky approximately 380 vehicles were on display. Mercedes Benz marque was well represented with by far
the largest number of cars, followed by Riley. The Riley Motor Club Victoria was celebrating its fiftieth year of activities and at
the end of the day two of their entries carried off trophies. Ean McDowell's 1935 Riley Imp was awarded 'Best Pre War British
Vehicle', and Frank McKenzie's 1934 Riley MPH took out the 'President's Award' . Musical atmosphere was provide by the
Radio Rythm orchestra with commentary and interviews by the invaluable Don Kinsey. Don probably is never given the appreciation
he deserves, his skills and knowledge are always in demand, and it appears that he never refuses a request to do a job that
few are willing to do.