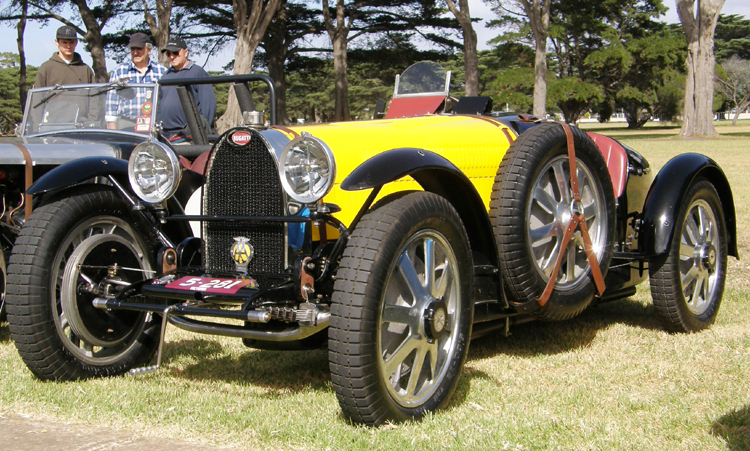 On Sunday 24th February, a significant Australian motoring event took place at the RAAF Base at Point Cook in Victoria. The intention of the organisers was to celebrate the 60th anniversary of the 1948 Australian Grand Prix, which was held on the actual site.

Pre-event publicity suggested that selected cars of the period were to perform a few demonstration laps of the old airstrip. However, it coincided with a major air display at the Base, and although there were many magnificent motorcars in attendance, they were not given permission to run. Unforeseen windy conditions made flying hazardous enough without adding to the promoter's insurance problems by having a variety of light and heavy aircraft using the landing strip while vintage cars were also out there displaying their capabilities.
Point Cook is situated on Port Phillip Bay, not far from the centre of Melbourne. Once a major flying School and the principal Royal Australian Air Force Base in Victoria, it is now best known as the site of the Air Force Museum, whose workshops are fully occupied in the restoration of historic aircraft As far as the airshow went, visitors had come from all over the world. Amongst the British and American aircraft on display were some Russian military and civil planes that caused considerable interest. Several WWII Spitfires and Mustangs lined up on the tarmac. A brief but exhilarating display of virtuoso flying was given by a de Havilland Vampire. Spectacular formation flights were given by a squadron of Harvards. Highlight of the flying display was a parachute drop of six servicemen, one of whom carried an enormous RAAF flag that quickly unfurled in the brisk breeze as he descended.

One of the original contenders of the 1948 race was the 1935 MG PA (Green and aluminium) at present owned by Graeme Steinfort.  Even as far back as 1948, the car  had a powerful reputation for having won the 1937 Australian Grand Prix, when it was driven by Les Murphy. It was also the class record holder at Rob Roy hill climb. With its 847 cc single overhead cam engine, and four-speed gearbox, it was fitted with a special Aspenal body built to Les Murphy's specification. Graeme is a well-respected competitor and owner, with an encyclopaedic knowledge of Australian motor sport. During the morning he joined the announcer in the mobile control tower to give a commentary on the automobiles on display.
Bob Harborrow's Maybach was probably the best-known car, and it attracted a lot of interest from the large crowd of visitors. Trevor Leech's Singer 1934/5 LM is fitted with a 972 cubic centimetre engine. It also attracted a lot of attention.It has identical specifications to the Singer team cars that took first and second place in their class at Le Mans in 1934. A bigger engined Singer won the Australian Grand Prix in 1934, driven by Bob Lea Wright. Ken Bedggood, Racing Manager, Penrite Oils, chose his pristine 1938 Type 328 BMW from among his collection, representing the Company's long association with Australian Motor Sport. The BMW was a tecnological marvel, with revolutionary design, and such features as hydraulic brakes and independent front suspension.
A remarkable car with a cigar-shaped back end was the 1926 Minerva owned by Brendan Dillon. It has a 5.5 litre engine, cylinder sleeve valve engine. Also in the fenced-off display area was a Morgan 1935 Super Sports. This amazing machine is owned by Tig Griffiths. It was one of the original competitors in the 1948 Australian Grand Prix held at point Cook. Included in its achievements are the AGP at Lobethal, and a string of events in South Australia and Victoria. It has a 990 cubic centimetre Matchless watercooled twin cylinder engine. It has three speed gearbox and a chain drive.
Close to the enclosure fence was an MG 1934 N type Magnette Special owned by Doug Keith. It was imported by Lanes motors in 1934. In 1939 it won the Border Rally, and raced in the Centenary 300 at Phillip Island.

The iconic radiator mascot is fitted to the 1924 Alvis 12/50 belonging to Mark Burns of the Vintage Sports Car Club. The car has a 1 1/2 litre four-cylinder overhead valve engine. Drive is through a crash gearbox. Rear brakes only. Ducks back body style. The car has run in the Targa Tasmania and in events in South Australia and Victoria. Tucked away against a shed was the blue Delage DMS. Brendan Dillon described it as the ultimate vintage touring car. Its current owner is Peter Willoughby. Three Delage cars were present at the display.
A short distance from the main display area, some other classic machines were assembled in a special enclosure. The glorious yellow and black Bugatti is a type 51. The current owner bought the car in Argentina about a year ago. "Many good cars went to Argentina after the war. This particular model is a 2.4 L, eight cylinder supercharged Typed 51.
Close by was a lovely little blue Riley, also shown in our photogaph. Unfortunately the owner had been absorbed into the crowd before I could find out anything about it. Some kind reader might bring us up to date.