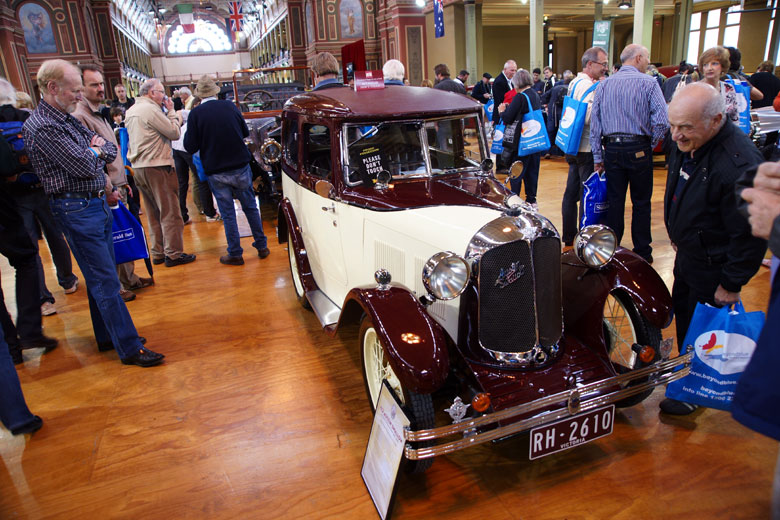 October 31 2010 - Richard Abey photo Photo by Richard Abey - taken at  'Motorclassica,  October 2010
1931 Austin Swallow   Owner: Mr Graham Burbidge, Wheelers hill, Victoria.    The Swallow sidecar Company was founded on 4 September 1922 by William Walmsley and the 21-year-old William Lyons and prospered in spite of the economic stagnation of the early 1920s.    The young company took a stand at the 1923 London Motorcycle Show and their success grew that the company and its premises until in 1926 they moved to a new factory and renamed the company Swallow Sidecar and Coach Building Company. It is here that the story of one of the United Kingdom's most evocative marques begins.    Although business was booming, the motorcycle industry was under stiff competition from the Austin 7, which not only had dramatically reduced the cost of motoring but also provided shelter from the elements, something not afforded to the passenger of a sidecar.  Lyons purchased the chassis on which to build a prototype and in early 1927, the Austin Swallow two seater was announced.  Featuring a delightful "Wasp"  tail and a detachable hardtop, the chassis was largely unmodified and by the end of the year, Lyons was successful in securing 550 orders.    The production moved to Coventry, where the new factory allowed them to introduce the new saloon body on the same Austin Seven chassis and production increased to 50 per week.    Distinguished by the bright colour schemes at a time when most cars were dull and dark, it is estimated that Swallow produced about 800 roadsters and 1700 saloon bodies from 1927 to 1932.      This example is the Austin Swallow Sports Saloon and was delivered in March 1931 to Mary Jane Hopley of Hull, UK.  It lay idle from 1948 to 1969 and suffered significant decay, was relegated to the Hull wrecking yards.  That "Lizzie" was finally rescued and given the restoration so much deserved, and that is a whole other story.
Tweet