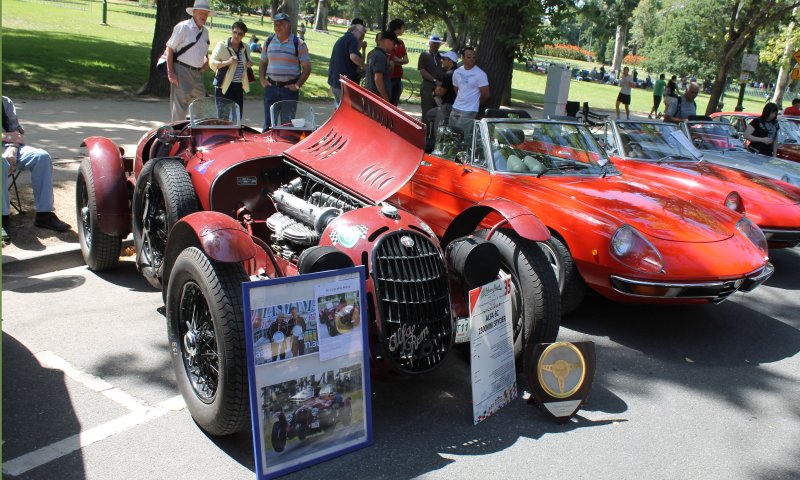 Kings Domain, Melbourne. January 26, 2012. Photos & Story:  Bill Hunter    Australia day 2012.  A bright and sunny morning in the King's Domain, Melbourne. Youth and freedom are required of us in our national anthem. (1st verse, 2nd line)  Motormarques set about doing its patriotic duty.The RACV organised the event reported in this article. In Sydney, the NRMA staged a similar display, where amongst other treasures was the midget speedcar originally driven by Sir Jack Brabham back in the 40s and 50s.     Speed cars and motor bikes, street sweepers, jeeps, old European champions and luxurious American coupes - they were all there to be admired. One particularly interesting car was the little black tourer shown above (2nd row from the top - to the right of the old motorcycles.) This is a 1915 Italian SCAT. The marque was successful in racing, having won the 1911 and 1914 Targa Florio.Next pictures to the right of the SCAT are the Singers - about 998 cc engine capacity. The Club had its usual brilliant display. Just returned from the Mornington Fly the Flag rally, they were, as always, sparkling and irresistable.The little ivory-coloured car next to the Singers is the rear-engined Renault 4cv from the immediate post World War 2 period. They were tiny. They had small engines (760 cc). They were made by the millions. Anybody who has ever owned one will be quick to tell you that they were 'adorable'.  To the right of the Renault is the massive Cadillac. It too seats 4 people! And right of that again is the Ford Anglia tourer with a 4 cyl (1172 cc) side valve engine. The tan and beige tourer (above, left) is a Graham Paige. Then the Alfa Romeo, and next to that is a lime green 'Scammell' street sweeper - a  utilitarian machine intended to clear Melbourne streets of horse dung.Last photo in that row shows a couple of admirers of a pre World War One Minerva - a Belgian machine with a famously large engine. Since the cars were placed more or less in random order, the photographer just went with the flow. Most  readers will identify the little grren tourer top left of this group. It is an Austin 7. The sky-blue two door car next to it is a Studebake from the early 1960s, and right of that are two photos ofthe magnificent little blue Senechal of the 1920s - noted for winning the Bol d'Or 3 times in succession. Its tricky front suspension and shock absorber arrangement are worth a close study! Getting it sorted was a puzzle for the present owner (it was his late father's car)In the next row, below the Senechal is the red, racy-looking Jensen, then another Austin 7, and the beige-coloured Standard tourer. The sporty red two-door car, last in this row is a Bristol probably from 1946, with an engine derived from the BMW 6. Top left: a line up of Jeeps.  From my admittedly slight knowledge of what classic car enthusiasts do or don't admire, I sense that American World War Two military vehicles, having played such an important role in the War in the Pacific, don't get the kind of respect that many Australians give to the great classics of Europe. The photo at the top left of this set suggests otherwise. To the right of the column of Jeeps is the bright red Prince A200 with its bonnet up, flashing its internal magnificence to all who knew what they were looking at. This car, this engine, provoked a generational switch from the reverence given to European performance cars in Australia, to admiration of the brilliance of Japanese design and engineering. Since the model of the Porsche shown in the photo to the right of the Prince, Porsche are no longer seen as suburban racers, but one of the most successful auto racing teams the world has ever seen. The photo top left of the above set is of a Lanchester from about the 1950s.  By the time this car was produced, the company had been acquired by Daimler, but this car still still carries the Lanchester badge. Then the white (ivory, surely) Thunderbird. Left hand drive, chrome, buttons and switches to dazzle any beginner, headrersts to show how up-with-it the car was, and a couple of Australian flags to let everyone know that the Americans were not getting this one back.Finally, a benevolent dragon, powered by feet, appeared - bells and cymbals - cheer and goodwill.  Farewell Australia Day 2012. See you all next year!
Tweet