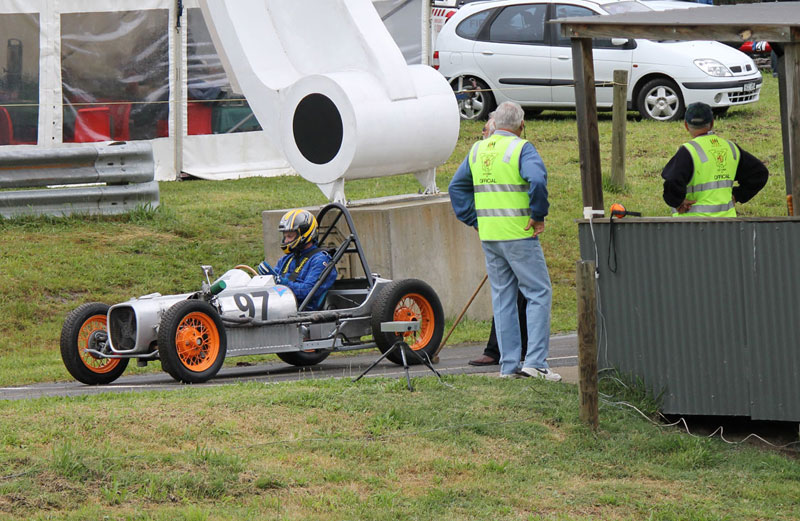 Richard Abey, Martin Stubbs and Bill Hunter. Rob Roy is about 200 km from where I live. I always have trouble finding my way there, specially with new roadworks, traffic diversions and ring roads skirting Melbourne these days. I had to use the Sat nav to get me to the Yarra Valley, Christmas Hills and Clintons Roadwhere the hillclimb has been located since 1938. Today's meeting was promoted and conducted by the MG Car Club Victoria.The weather did not look promising last Sunday 26 November. Heavy rain had fallen all the previous day, and I needed the windscreen wipers much of the time.John Coffin made a comment: " When I got here yesterday," he said, "the rain was horizontal, and this morning I heard something that I have not heard in years. It was the little creek behind us there running at full level. "Another bloke said he saw a wombat down there. That must have been quite a sight.Paul Schilling tried to start his Kawasaki-powered air-cooled car. The engine refused to start. The team cleaned the carburettor, checked the distributor, pulled out the plugs. Everything they could think of. Darren Visser waved his hand over it. The grandchildren gave the little car a push start, and the trademark cloud of white smoke began pouring from the exhausts. Loud cheers.John Gillett had no trouble with his fabulous MG K3. Graeme Raper was doing some adjustments to the So-Cal, as it would be Louise who would be driving it. A whole fleet of Austin sevens gathered together for a photo shoot. Norm Beechy was there. Graham Hoinville and commentator/driver Don Kinsey likewise. Drivers' briefing was completed and everything was ready to go by nine o'clock.Please Note - Click on the small images below to see a larger version. Sometimes a second click will improve focus and enlargement of the picture. Look for the + sign in the small circle. Given the nature of historic car racing, it is only fit that a special trophy be awarded to drivers who have a fair bit of history behind them as well. This trophy is based on “an index of performance" and not the fastest and most expensive car. The competition is only conducted at Rob Roy and is for drivers aged 65 years of age and over. The index of performance is based on the driver's age added to the age of his or her car and divided by their best time up the hill. (Ref - Official Programme.)Of the 14 previous winners of the "Trophee" since 1997, Motormarques spotted 7 at the 20th Historic & Classic Hillclimb on Sunday 27 November 2011.Trevor Cole, Graham Hoinville. Ian Rankine, Don Kinsey, Ray Sprague, Walter Magilton, and Bill Prowse.  Some of these champion trophy-winners have raced at the legendary Templestowe Hillclimb quite a few years ago now.Templestowe was a 969 metre long track, designed and constructed in 1951 by members of the Victorian Sporting Car Club, and which was enormously popular in its day. Urban development engulfed it and the final event was conducted by the MG Car Club on 6th December 1987. I mention this because there was a giant construction at that venue in the form of giant brake shoes. This steel and concrete construction was moved to Rob Roy and its reconstruction was completed in November 2009. The event at Rob Roy described in this article was a special "opening" celebration. Please Note: Motormarques holds a great many more photos of this event, as well as of other events presented over the years by Motormarques. Many of these are Hi-res and quite large. You are invited to Register with Us (see the Create an account box at the bottom of the left hand column on our Front Page) for more information.
Tweet