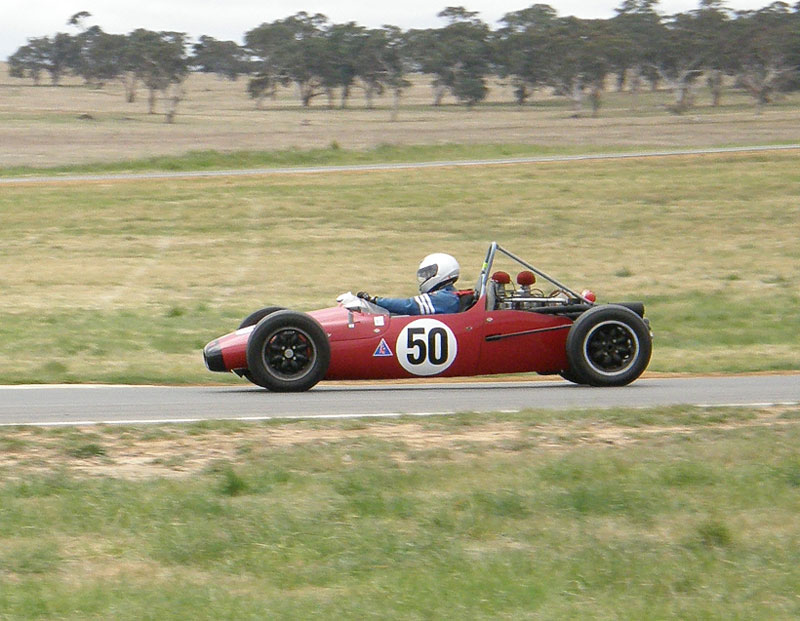 Text and photos by Lucas and Bill Hunter For the last few weeks Motormarques has been promoting two major motorsport events in Australia - the Historic Sports and Racing Car Association event at Wakefield Park in New South Wales, and the Collingrove Hillclimb in South Australia.   Since each of them is 5 or 600 miles or more from Melbourne, we had one part of the Motormarques team going north to New South Wales, and the other part heading west  to South Australia.   The HSRCA attracted a field of  some of the greatest cars in the country, participating in 38 events.   Wakefield Park, you would have to say, is a bit off the beaten track. It's not that far out of Goulburn and the big Merino (a giant concrete ram you can climb into if you want. )   We walked across muddy ground and paid the entrance money. The ticket mentioned that Wakefield Park is "The best spectator track in Australia", which could be true, but I think that the Haunted Hills track near Morwell in Victoria would go close to equalling it. I spotted a fine looking TVR on a trailer, just near the entrance.  It was shown on the entry list as a 1972 TVR 2500M.They’re not all that common a car, and I had to look them up in a book later on to find something about them.   TVR started off in the 1950s in Blackpool, England, producing kit cars. They had a multi-tube frame and a fibreglass body. TVRMs came later, fitted with Triumph 2498 cc and Ford 2944 cc engines .   There was another TVR M at the meeting - David Price's 1972 car.I had a word to Bill Donoghue, who was taking a coffee break while another TVR nearby (See car No 82 - left) was being prepared for racing.It was fitted with a cage that looked very neat and strong. Apparently the job had been done by a friend of Bill”s.   “A bloke from Sydney?"   " No. He's from Canberra. He's a rally fanatic, and he does a lot of work on a lot of cars in the Canberra area "   On the subject of trailers, I later had a word to Wes Dayton who was roping his MG TC to one. He was getting ready to head back to Sydney.   It was quite a few years since we last met. I couldn't see the 1960 TR3A he normally drives.   "It broke on Friday. Nothing too serious."   I hadn’t seen this MG before. Wes told me a bit about it. He built it up from scratch with parts he had got from all over the country.   "The chassis was hanging in someone's garage for about 20 years. It took us seven years to build it. It is entered in a special CAMS class called Lc* ""This is a class for cars that have a racing history and are in the likeness of the car that the guys are used to drive."   "The car you're looking at has all standard TC parts - all the way back. The chassis was straightened but it is standard as is the transmission, differential, driveline, everything."   I asked him where were all the cosmetic bits.   "Never had them. All the bits came from different places."   "Are you going to race it again today?"   "No. I've got to get home." MG TCs featured in another category at Wakefield. The 'Aussie Special' Group that attracted Dick Willis' Stewart MG, Syd Reinhardt's 'John Blanden' Special,John Gillett's Special, Bob Boast's TC-powered Special, Richard Townley's Patterson/Bryden TC,  Brian Parkinson's 'The GAF', and Chris Farrell's Special. The Aussie Specials category was truly magic, attracting, amongst other famous machines, the 1935 Kleinig Hudson shown below.* Confederation of Australian Motorsport - (Lc - Square Riggers - This group caters for “square rigger” sports cars (primarily MG TC) where it was common practice to remove the windscreen, mudguards and headlights and run as a racing car, at the whim of the owner. One-off special type vehicles constructed at any time after 1 January 1940 but prior to the end of 1960 are also catered for in this group. )

It must be said that the weather was against us. The skies were grey and a chill wind was blowing hard. A massive storm was building up that would
produce some of the wettest days in those parts for over 90 years.  As Lucas Hunter writes - ' the Father in the sky was having a rough day.'


There were a few spins and other incidents out on the circuit..

Michael Peters'  1983 Formula Vee Avanti - Car No 4, shown on the left  -
looked as if it had gone into something solid.

Around back of the admin buildings there was a hill with a good view of the whole
circuit, and where the cars passed within about 50 metres.

And there were tons of great cars and drivers to see.

Brenda Hunter in the Lasos Holden

All that was needed was to hang on, keep the camera steady, max out  the zoom and keep wiping the lens

Below - click on each of the 4 small images to view the bigger picture.

Petrol-head adventure, Wakefield Park 2011
The night before heading up to Wakefield Park, I was hoping that the Father in the sky would be so kind as to bless us with some sunny weather for
the classic car racing. The morning caffeine hit made the day take a turn for the better. The four of us soon discovered that fitting 3 fully grown men
(and one almost) into a Ford Fiesta was not the most comfortable of tasks. So, with the car squatting at the back like an old dog affected by arthritis
we set off, the petrol-head switch in our brains firmly set in the ‘on’ position.
Upon arrival I was instructed by Bill (senior) to not take photos of anything you could call ‘regular’.Aware of this, I shrugged off the 8 degree weather and embarked on my photographic mission. Although the spectator area near the pits was both exciting and interesting, I could not find a good enough position to take a decent photograph.
I soon discovered that it was possible to drive along a rough little goat path to get to the other side of the track, where there was a nice protected area with excellent corner positions. The roaring thump of big V8 Holdens harmonised with the fiery crack and pop of the lighter (yet still just as quick) Mini’s and MG’s. The Holden drivers needed to prod the throttle gently through the corners to avoid an inevitable spin due to the wet conditions.
The clouds eventually opened, though, giving Bill and me a small window of opportunity to get a few good shots of the cars.

The photos I took are zoomed out and wide-angle. This is due to the lack of a safari type lens, however I hope you enjoy them and see why we love motor racing so much.