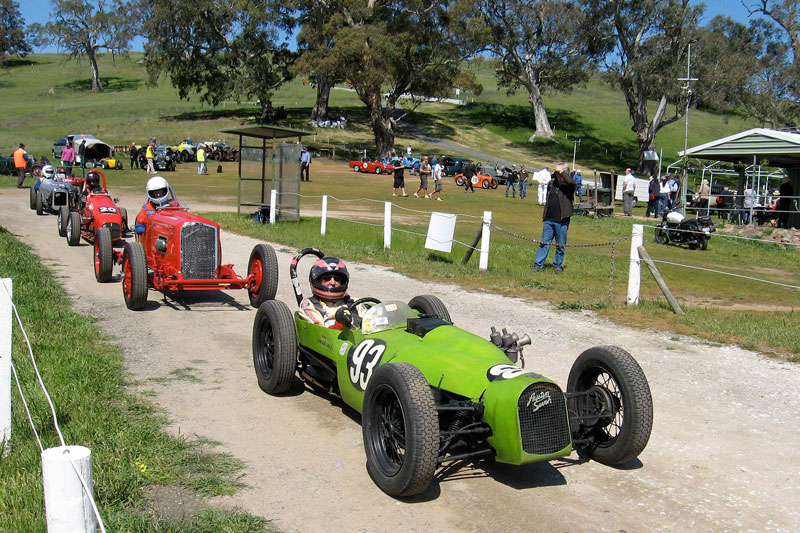 Words: Martin Stubbs.  Photos: Gerry van Leeuwen & Martin Stubbs It was with some trepidation that I left Melbourne at 6.00 am for Collingrove in South Australia. Heavy rain storms were still around and most of southern Australia was experiencing a series of cold fronts with high winds. I had allowed 10 hours to travel the 900 kilometers to Collingrove as I had arranged to have the gate unlocked at 4.00 pm at the site so I could camp overnight. For many years I had heard all about Collingrove and that it had similarities to the famous Shelsley Walsh Hillclimb in the UK  So this was the year it was to happen and a group of the Austin 7 racing fraternity were encouraged by the Sporting Car Club of  South Australia to come across. The group consisted of Trevor Cole, John Marriott, Phillip Hallo and myself. Another Victoria  group were the Vauxhall 30/98s of Mike Hipkins, Peter Holbeach and Ron House, and the Victorian MGs of Ed Taylor J3,  Doug Keith NA Magnette and Neil Cooke PB. The only other entrant from Victoria was Grant Cowie with his  Shelsley Frazer Nash, a most appropriate car for a vintage hillclimb. Other well known Victorians visiting but not driving  were Graeme Steinfort and Nigel Tait.   On Sunday as the heats got underway first timers like myself to this track were struck by the differences of this layout compared to our venues in Victoria. It is narrow, twisty with tight turns one on top of the other with a coarse surface which allows for high grip levels. Collingrove is well organized and includes a return road, with only 42 entrants we got through our three runs in the morning and two in the afternoon in no time.  Competitors were grouped in classes, 'Come & Run', Group J, Group K, Invited Post War and Vintage Sports & Touring Cars. As well as these classes all Austin 7 competitors were eligible for the Kevin Shearer Formula Award - a mysterious mathematical equation to reward the oldest driver driving the oldest car. In this case the result was a forgone  conclusion, the winner being our Trevor Cole.

Loading for the trip home Many thanks to Jim Scammell and the other members of the Hillclimb Group for making us Victorian's welcome to your wonderful Collingrove Hillclimb. The event was a great experience both on and off the track, and the weather was glorious. We would love to be back for next year to see if we can improve our times, obviously five runs was not enough to learn all the nuances of this track which provides the enthusiastic driver with many rewards.
Tweet