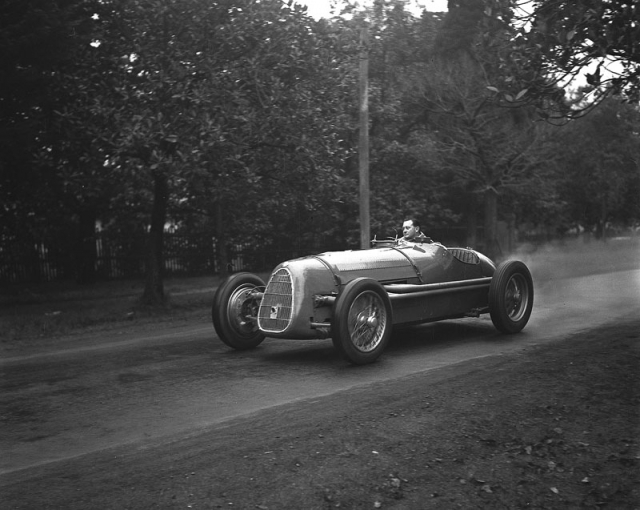 Charlie Dean became involved with racing after the wartime. He wanted to build his own racing car and the first thing to do was find a suitable engine. A friend who owned a war surplus wrecking yard had a ‘Demag’ half-track armoured personnel carrier which was powered by a Maybach 6 cylinder 3.8 litre SOHC, cross flow engine.
Charlie bought the half-track just for the engine. The block was cast-iron, the head aluminium, the crank ran on 8 main bearings and in standard form the engine produced 100bhp at 2800rpm, but the engines performance potential was clear to Dean. Dean set about modifying the bulky single overhead camshaft engine for racing. He fitted Amal carbs to a self-fabricated manifold, increased the compression ratio to 8:1 by planing the head and a re-ground cam was made to increase valve lift and duration.
The engine was installed in a steel ladder frame. Front suspension comprised a transverse leaf spring with suspension arms and stub axles from a 1937 Studebaker Commander. Rear suspension was of conventional semi elliptic leaf springs, Luvax lever-arm shocks were used. A Fiat 525 gearbox drove an open prop-shaft to a Lancia Lambda rear axle. A Jeep steering box was used. Standard Studebaker brakes and wheels were fitted at the front and Lancia brakes, hubs and wheels at the rear.
A Grand Prix style body was built by fellow Repco Engineer and in 1946 the Maybach Special Mk1 was born. The car was further developed for competition use and Charlie debuted it at Rob Roy Hillclimb in 1947.
In 1951 Stan Jones (father of 1980 F1 champion Alan Jones) bought the car and he continued the car development and preparation.                                                                                                                         All images copyright to Martin Stubbs.
Tweet
View the embedded image gallery online at:
https://www.motormarques.com/news/melbourne-desk/item/370-dacre-stubbs-photo-collection-the-first-maybach#sigProId8ce419d771