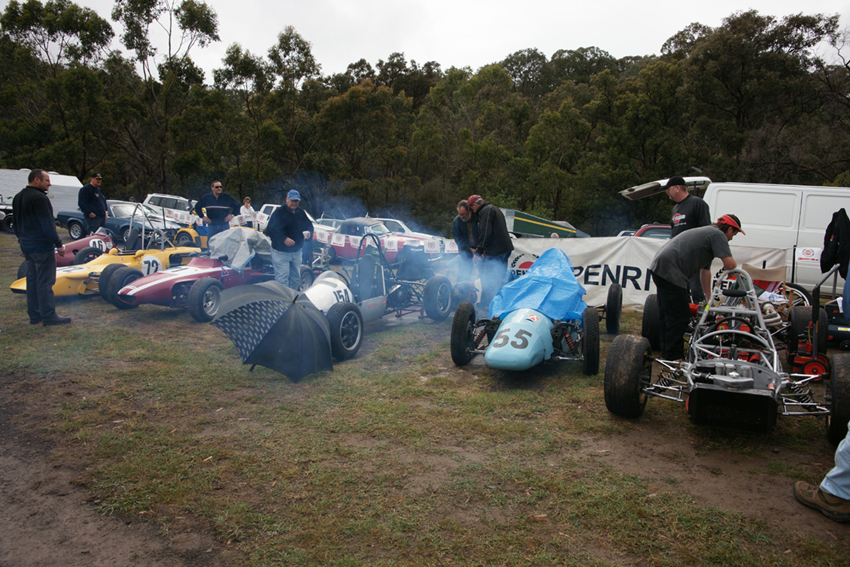 Photos: Richard Abey Video and recorded voice transcriptions: Bill Hunter (MM)
A chatty satellite navigation system directed us to Christmas Hills on Sunday 29 November. The big newly-erected PBR 'arch' at the starting line must have been a sight-line for the celestial beams, because our usual two hour trip across the city of Melbourne was halved. We had plenty of time to absorb the atmosphere, and chat to some new and old acquaintances.         Our Video gives a good idea of the day's proceedings. Click here (Vimeo)  or  on the image below (Youtube)  to view the action on the hill.          Fred Greeneklee's Mk 9 Cooper JAP       Racing car number 2  is Fred Grreeneklee from South Australia. The car is a Cooper 1100 Mark 9,  V. twin

F.G In the old days the Mark 9s were the weapon for  hill climbing.  This car was made in 1956.  It was exported to New Zealand  and  ran over there.  Tim Sagar won a couple of Hillclimb championships in it. It was imported to Australia in 1985.  It sat around doing nothing until I bought it in 1990.

MM How did you find it?

F.G It was in a workshop where it was being restored and a friend of mine saw it and told me about it.  He actually organised the deal.  I was most fortunate in getting the car because they are scarce as hen's teeth -- especially the Mark 9s.  There were plenty of Mark 4s and earlier models around the place but not many of the later models.

MM How much did you pay for it?

F.G It didn't have an engine.  Nor did it have any back wheels.  I had to import the back wheels from England and we had to virtually manufacture an engine using single cylinder JAP top half and manufacturing the flywheel and crankcase.  This was in 1990. We have been running it since then.  It's a fun car but it is highly self-destructive.  It has broken crank pins, main bearings, gearbox layshaft, drive axles, universal joints.  The power that the engine develops is all low down and it just sheers things off, like twisting an apple in half.  Anything that's not really strong just breaks.

MM Is that because of the age of it?

F.G No it's just the nature of the beast.  It runs on about 14: 1 compression ratio.  What we have had to do is to improve the metallurgy involved in terms of what materials we use for the crankcase and stuff.  The crankcase has had to be cast and machined, but the parts that have been breaking primarily are crank pins.  The engines have two conrods so the crank pins that run side-by-side have to be fairly long and as a consequence they tend to flex.  So they have a shorter life.  It's the very opposite to the modern Japanese motorcycles that use multi cylinders, and everything is very small.  Our engine uses needle roller bearings instead of the original ball bearings that were used in the old days.  So while the engine looks like a JAP engine, in order to keep it going,  it contains many internal modifications.

It has been a great car and has been used all over Australia. Except Western Australia and Queensland.  Philip island Eastern Creek and Amaroo.  Oran Park it has always been good fun.

MM Can I get your photograph for the record? (See photo below, right )          Lindsay Urquhart - Anzani Special

MM: How long have you been driving the car?

MM. Where on the track did that happen ?

LU: On turn one.  If you get turn one wrong  you'll hit the Armco.

Trevor Cole:  I have watched many many people over the years who did  that because they  don't realise that the corner comes back on itself.  You have to travel round on the right-hand side.  That's the only way to get round there.  If you've got your wheels in the gravel on the right-hand side you're on line.  If you're  too far over to the left, you will never ever get through the Armco.

MM: What sort of revs are you doing at that point?

MM: What is your fastest time here?

LU: Yes, yeah.  It's a 1924 Anzani motor.  I got the original block overseas.  It was a well enough known name back in the 30s and 40s.  In the first  World War they went into  aircraft motors.  You know.  They were making motors for the German air force and after the war the British took them over as British Anzani..

MM: How do you keep it going?  Do you do your own machining and so on?

LU: Yes.  I do all the bits and pieces.  They are a very simple motor.  They have a good solid crankcase.  Very strong, you know.  Quite nice things to drive.  A very torquey motor.  Quite a lot of motorcycle engines have a very low-power band.  The Manx Nortons.  A Jap motor would cost you something like 50 grand.  A car like Fred Greeneklee's would cost about 80 grand.

MM: How did you enjoy Sandown?

KB: The track is quite badly deteriorated these days.  There is a big bump just before turn one that brought many cars unstuck.

MM: How did you finish up?

MM: He has a lot of cars.  You have quite a few yourself.

MM: How did you do on that first run?

MM: How long have you been driving it?

MM: Are you from New South Wales.

GR:No, here in Melbourne.  Down in Brighton.

GR:I love it to death.

MM: I notice you have been giving Jim Russell a run for his money.

MM: How long have you been driving?

GR: I raced a Chev Impala for seven years in group N appendix A (45 years ago) and a Skyline GT.  But one car is enough for me now.  If you want to run at the pointy end of your class it is going to be relatively expensive.  If you just want to tootle around, that's a different matter.  Clutches, hubs, engines, gearbox.  I shatter hubs regularly.  It has a shortened driveline and shortened axles.  They don't have a lot of give.

MM: People tell me that corner  one here is a bit of a bugger.

GR: All corners are great.  You have just got to go around it.  Just stay on the track.