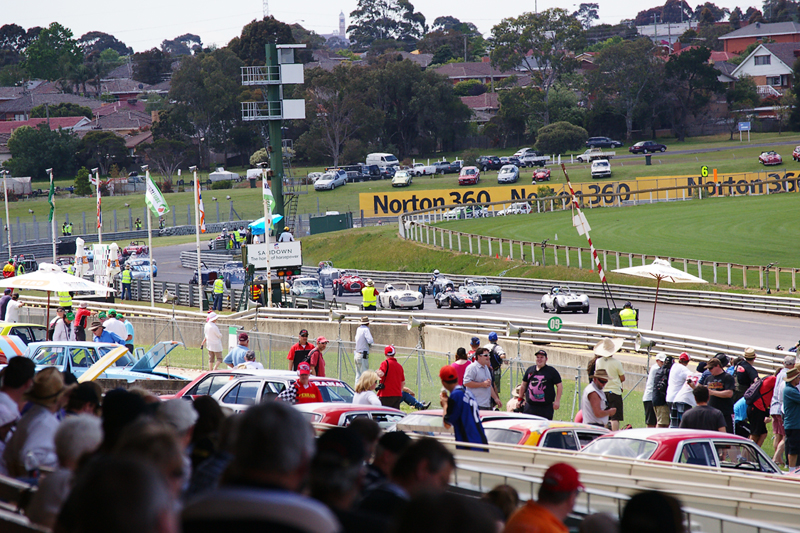 The souvenir programme listed over 400 cars in all categories.

Sandown complex is primarily a horse racing venue with very extensive grandstands and spectator facilities.  The motor racing circuit main straight runs parallel to the main straight for almost half its length.

If horseracing events in Melbourne attract the latest fashion in women's hats and men's cravats, this particular motor racing event attracted some spectacular cameras.  There ought to be a special concours for them.

Despite the large crowd and the high level of activity, Motormarques was able to spend a few moments chatting with some notable personages.       Ron Townley's Magnificant Lago Talbot   Motormarques caught up with Ron Townley who was making some last-minute adjustments to his magnificent 1948 Formula One 4 1/2 litre unsupercharged Lago Talbot.

We asked if he were driving anything else today.

Tony Lago wanted to put Talbot on the map after the war.

Ron Townley: No he was an Italian.  He was the manager of Wilson's -- the preselected gearbox people and he went on to manage Talbot. They had no money.  To put them on the map he decided to go Grand Prix racing, and he chose the four and a half litre cars instead of the alternative on supercharged formula instead of the 1 1/2 litre supercharged that were being used by Alfa Romeo and Maserati .  The trouble with the one and a half litre was that while they were filling up with fuel the Lago was still going round.  That plus the fact that it was a very reliable car.

It was built in 1948 and is the first of the current Formula One cars.  The T 26 was fitted with large drum brakes, the Wilson preselector four speed gearbox, and a conventional box section chassis.

In its debut race at the Monaco Grand Prix, it was clear that the Talbot Lago was no match for the Maseratis and the two-stage supercharged cars.  The main advantage that the T 26 employed was their ability to run the entire race without refuelling or changing times.  The Maserati cars pitted halfway through the race, which gave the Talbot Lago a chance to regain some ground as the chequered flag fell, Nino Farina, Maserati was first, followed closely by a key 26 driven by Louis Chiron.

It was raced all over Europe and the famous Louis Chiron drove it, Pierre Levegh -- who was later to be killed in a terrible crash at Le Mans driving one of the factory cars.  Fifi (comment is this a short for Philip?) Etancelin was another of the drivers.  The car went back in the factory in 1953 and Lago upgraded to the latest specifications -- the earlier cars had the oil tank above the drivers' legs and they had the preselector gearbox and his legs so subsequently on those big long roads are just about cooked.  He put the twin plan heads, twin magnetos, oil tank

It had a ZF limited slip differential it was the second car Lago made in the last.

It is a sophisticated machine.  Ian Tate help me rebuild the engine including crankshaft, new con rods, everything you and very well made.  Alloy block, alloy heads, and we haven't had any trouble with it since.

Ron Townley: He is the best.

Footnote: Based on recent figures, the estimated value of  the car would be $US 1 1/4 million.
.
Paul owns a Buchanan Cobra, a  car that was produced from about 1958 to 1960 by Nat Buchanan.  Paul was not entered to race the car this weekend, but we did manage to find out about another of his major interests:  the Dorian timer..

This device is required at most circuit races in Australia in order for the race timing system to work. The units are the specified unit for timing for CAMS (Confederation of Australian Motor Sport)

A transmitter is placed under the car and transmits specific coded information to trackside receivers (TSRs) and underground antennae as it passes over them. The information gathered from the antennae in turn is sent to a Control PC located in the official timer' s box.  The car' s data is read by Control with an accuracy of 1/10000 of a second.

Motormarques recently found the price of a used unit for 300 Australian dollars, available in Sydney.