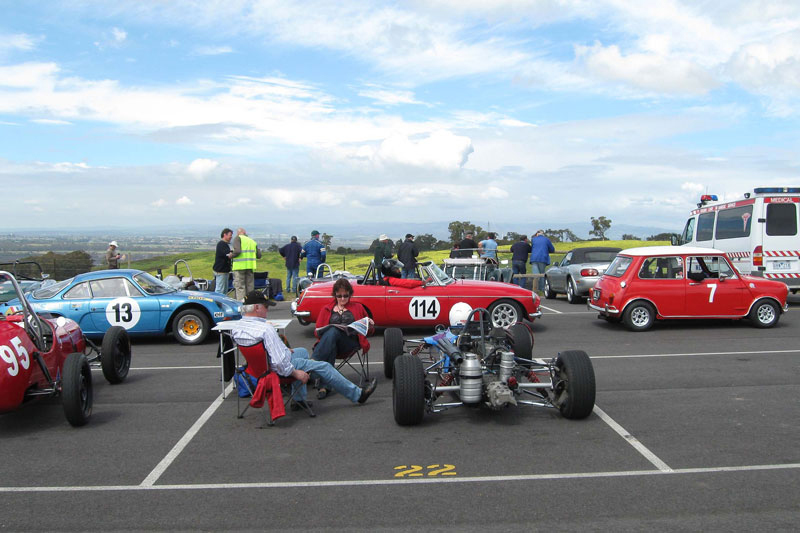 3 November 2009 - Bill Hunter
Motormarques' coverage of this event includes two excellent 'click-on-image'  videos (See below) and the following sound recorder transcriptions -   Bill Redpath.  "The car (No 62, below ) is a Lancia Lambda 7th series.  Ron, my father, built the car to go hill climbing and first raced it in the 1950s.  Rob Roy 1952, I think, was its first race.  It always was a hill climbing car in this format.  It started with a Ford side valve motor, then in Christmas 1954 it was fitted with an Oldsmobile engine and an early Moss close ratio gear box.  I haven't raced it here at Haunted Hills before.

Self: "You're going to be cold." (referring to the bodiless racer)

B.R grins: "I'll find out during practice."   John Coffin reckoned he needed a heater in his car (No 61, below).   He has owned the BSA special since 1999.  "Don't know how many miles it has done but it has done a few.  The car was specially built for a BSA engine -- you can't fit a Norton or anything like that in it --  It has always had the same engine since it was built.  I do have another BSA engine which has been specially built up.  It is very torque-ey down low.  If you want to alter that you have to change the cams.  I have had a high lift cam in it which will only give me torque at about 5000 rpm.  We'll see how it goes."
Ross Jackson.  De Tomaso Pantera (Car No 72, above).

"The Pantera is happier on a circuit like Sandown with its long straights.  Maybe it is not as good on a tight circuit.  On this kind of circuit it is usually outpaced by the top Porsches."

"Alessandro de Tomaso was one of the great motoring characters of the 1960s.  The original car had a chassis that bent like a banana, so when he built the Pantera in the early 1970s, he responded to criticism by putting a great deal of attention on the chassis. That made the car weigh a fair bit.  The combination of the Italian design, Ford 351 engine, and transaxle (transmission, clutch and final drive built into a single housing) started to draw public attention."

"The car was produced at a factory in Modena.  Alessandro, an Argentinian, was one of those romantic figures of the 1950s and 1960s.  He planned to build a car for Formula One.  The Pantera (5.8 litre engine -- top speed of 260 km/h) was his most successful car. It was made in the late 1970s and 1980s and continued until the early 1990s.  Lincoln Motor Company were the distributors and dealerships.  Elvis Presley made some contribution to its reputation, reputedly by firing a gun at it when it refused to start."

"In Australia, Rusty French drove a Pantera in the 1970s and 80s and Dr Eggleston's wife owned a pink one that was known as the "Pink Panther".

Ross Jackson was one of the first to run a Pantera in Group S (modified production sports cars)
"There were not many in Australia but they were popular in the States.  They are fantastic on the right circuit -- say Philip island or Sandown, and I always have a good dice where ever it is entered. It has been outright winner at Phillip Island, Sandown and Calder. It did well at the last Rob Roy hill climb in May with a 24.6. It also did well in Queensland but I hardly ever go interstate these days.  Family, time and money are factors that affect us all.  The whole thing is really about having a good experience and hanging around with your mates."
Ian Tate (Ford Prefect Special - car No 95, below) says he does not have very many cars in his garage at the moment. Knowing my interest in Allards, he tells me that Dean Butler had a bad experience with his J2 at Goodwood this year. The dark green one.  He blew the big Cadillac motor after 1 1/2 laps.
Leo Bates: Lobito. (Car No 64, above ) Leo -- built the car.  It held the FTD at Rob Roy, and has raced at Collingrove, Ararat, Mount Panorama, Moe dirt track, and othersalso .

Self: " Where is the Hillclimb at Mount Panorama?"

Leo: " It starts from the clubroom and finishes at McPhillamy Park."

Leo also designed and built the chassis for the Photon shown in the video  -- car number 99 -- which has a Lotus 11 body.
Martin Stubbs - Car No 97. :"The Austin 7's problem was lack of response on the sharp left corners after coming downhill on a trailing throttle. A possible solution is to do left foot braking while getting my foot on the accelerator at the same time ."
Tweet