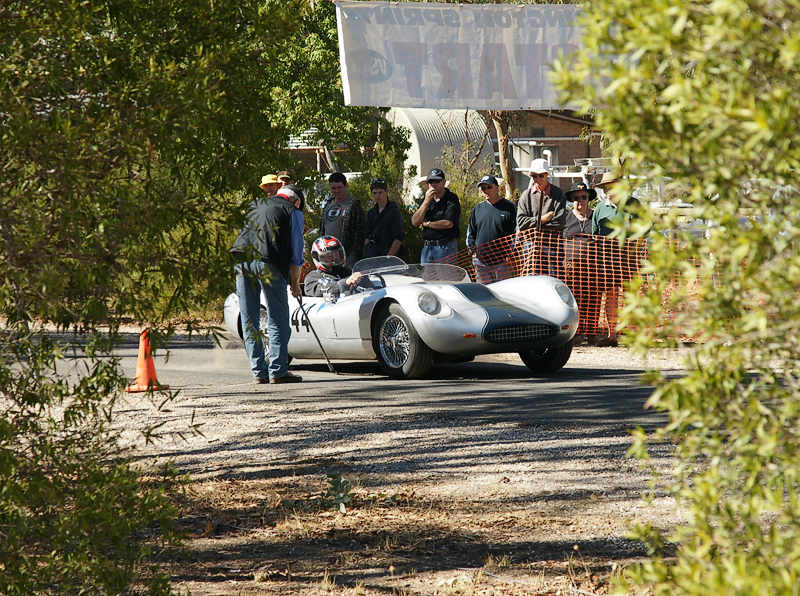 Trying to get near enough to the track to get reasonable video shots is impossible. You only have about 10 seconds at most, and much of the view is obstructed by trees that have somehow survived drought and fire.  Photographer Richard  joined the team on Saturday March 28, and took the still photographs of the meeting, while I went up to the finish line intending to capture dramatic scenes of cars flashing past the Finish line. Well - you know what they say about where good intentions often lead ... However, between Richard and me, our coverage gives a pretty good idea of the fire and fury at Eddington.
(Note: please use the HQ button on the video to get a higher quality picture)

Car number 59 is a 1948 MG TC owned and campaigned by the Pittman family -- John, Mark, and Robert.  It was imported into Australia as a chassis by the Head brothers of Murrumbeena.  It has run in four Australian Grand Prix races.  The body was made by Head Brothers. It has always been supercharged, but John reckons it has too much pressure.  These days it only runs 8 pounds.  The car has a standard MG wheelbase, a fully licensed history and standard MG suspension.

The Vauxhall registered number OE 227 is a 1925 30 -- 98.  Glen Farrell from the West Melbourne needed a helmet for today, and was busy trying to borrow one.  The car was built in England with a 4.2 L engine and Glen uses it "everywhere".

Car number 79 is an MG TC.  Mike Killingsworth has owned it for 13 years and is "just getting used to it."  Although it is a red lined at 5500, which is the standard TC mark, Mike says that you're always looking where you're driving so you don't have time to check instruments.  But he is fairly sure that the car still pulls about 6000 rpm.  Nuvolari is supposed to have said that if you can read your instruments you're not going fast enough. "Of course it all depends on the day," Mike says.  "If you miss a gear change it's all over!"  Harry and Val Forde built this car.  The Forde Brothers operated in Bayswater during the 1960s.  Harry is still around.  He was at Sandown last year and sat in the car.  It has been set up as a track car of a Clubman type.  It has been used over the last 30 years as a Sprint and Hillclimb car.  It runs on 100% methanol.  The engine capacity is 1248 cubic centimetres with a raised compression ratio plus a big supercharger and big carburettor.  It has two fuel outlets, two fuel pumps, two fuel lines, two fuel bowls which then feed into the engine.  The chassis is shortened version of a TC chassis.  The engine is lowered in the chassis and set back at an angle, and the gearbox extension does not line up with the tail shaft but is at an angle.  The differential is offset by 2 inches.  One half shaft is 4 inches longer than the other.  That way you can get down as low as possible.  All the work was done by Forde Brothers.  Harry Firth built a car similar to this one.

An extraordinary "find " in the paddock was an unrestored SS. Swift, seen above.  The Swift was made during the 1930s by the Swallow Company in England, who changed the initials SS because of the connotations with the German military organisation who used the same initials.  There may not be many examples of this car in the world, but it looks like an extensive and expensive restoration project.  Evidently it had got to Eddington under its own power.

The Honda S.600 seen in the video is owned by Carl DeFina.  He has had it since 1988.  The engine is red lined at at 9500 rpm, but "we've had it up to over 12."  When the S.600 came out they outsold the Sprite and Midget at about the same price.  They must have lost money on each one because they were very complex -- for example the rear end has 17 bearings.  When Carl first got it it was a road car but it has done competitions for a long while.  Possibly its first outing was at the second Arthurs seat hill climb.

An interesting motorcycle -- powered car is the 500 cubic centimetre Kawasaki H1 rear engine car, also seen in the video.  Lee  Falkenberg, an American who lived in Nunnawadding built the car.  Its owner Paul Schilling has a Buchanan Cobra as well.  This Kawasaki is his toy car and he has been trying to get it going all year but has never had a successful meeting with it yet, as it has had motor problems and just about everything else.  It was rebuilt from the ground up and he brought it as a Formula Libre  He has had it since 96 or 97.  It sat in a shed for a long time until the Worlds Fastest Indian movie came up and he got the bug again.  "This one is the world's fastest Kawasaki, " he says.