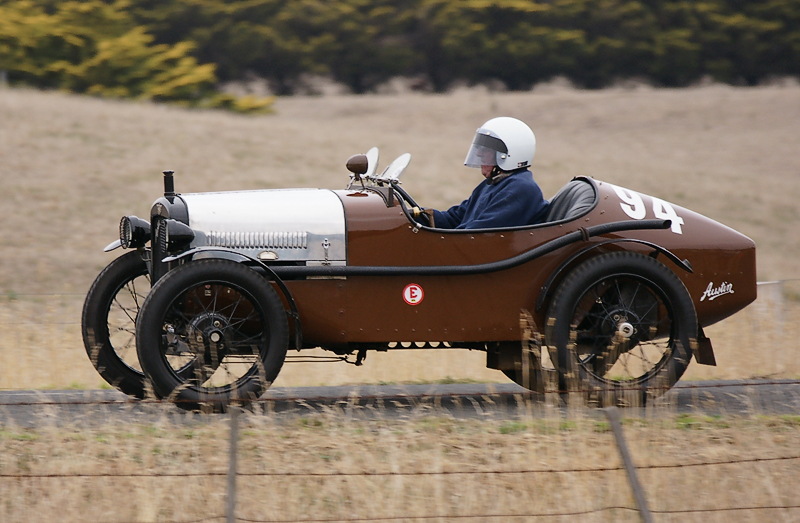 Myrniong hillclimb/sprint attracts some of Victoria's best historic race cars and drivers, and Sunday 15 April 2009 was one of its best.

Early in the morning, whilst race cars from all parts of the state were still being unloaded from their trailers, I had a word to Jim Russell, driver of  car number 11 - his famous Ford V8 special (this time without its pants on)  We chatted a while about a Maserati standing nearby, which had a  great number of lengths of tubing welded together in a kind of cage, so there was no reason to suspect it was anything other than a genuine Birdcage, even though the program simply referred to it as a Maserati 2900 (driven by Graham Alexander)

Jim Russell has beeen racing since the  early 1960s, with successes at Phillip Island, Eddington, Winton, Rob Roy, Calder, Tarrengower, Arthurs Seat, Templestowe, and other circuits and in other states.  Program notes for today's events referred to Jim as "a great driver and mate".  It is a universally shared view.

The program also refers to car number 94 -- Austin 7, 747 cc.  There needs to be a little more said about that. The car is, in fact, a replica built on the correct type of chassis etc, of the 1st Australian Grand prix winner of 1927. Current owner, Graeme Steinfort (probably through Tony Johns) located the motor and gearbox which is believed to be from the original AGP car. The 1927 car was driven by Arthur Waite, the first winner of the AGP, which is the world's second-oldest Grand Prix. By the time of his death in his 97th year in 1991, the Colonel's credentials included: "Colonel Arthur Waite, MC., OstJ., DL., JP., Freeman of the City of London."

Whilst on the subject of Austin 7s, there was a great line up, including Peter Matthews in his supercharged car number 3, Trevor Cole in car number 93. Trevor's history goes back to speedway driving in Sydney during the 1950s. Glenn Bishop, car number 96 in its usual immaculate state, Allan Tyrrell in the naked Tyrrell Special -- car number 121, Martin Stubbs in car 97 (the late Dacre Stubbs' photographs appear regularly on the Motormarques site), John Marriott in the Brooklands style Athey A7, and the ever-vivacious Basil Van Dongen in the Tait A7.

Paul Schilling, recently featured in a Motormarques article on Eddington, left his Kawasaki powered race car at home, and brought instead his Buchanan Cobra (1147 cc) Mischievous junior members of the family put Band-Aids on various dings picked up over its many years of hard work.

Good to see Gary Poole in his 48 -- 215 (2590 cc) Holden -- holder of the class record at Myrniong -- putting his brilliantly presented car through its paces again.

Standing halfway up the hill was David Norris watching car number 140 (1275 cc MG Midget) -- his wife Ruth aiming to better her class record of 40.6 seconds.  Since David also competes in the car (as car number 40) I asked him if he knew what speed the car was doing. He said that he did not know, but he must remember to look next time. He commented that the start of the hill climb was relatively flat for the first two hundred or so yards, with just time enough to snatch a couple of gear changes before the really fast action began as the road made a sharpish right-hander and began a steep climb towards an even tighter corner and steeper hill, I thought that checking the speedo as well as the rev counter whilst keeping everything else together might be a bit too much.

Fascinating also was a late 1930s Aston Martin 3 litre sports car in the spectators paddock. Mr Westcott, who has owned it for 20 years, was kind enough to spend some time showing the quality of its build, and current immaculate condition. It has been serviced by Aston Martin in the UK.