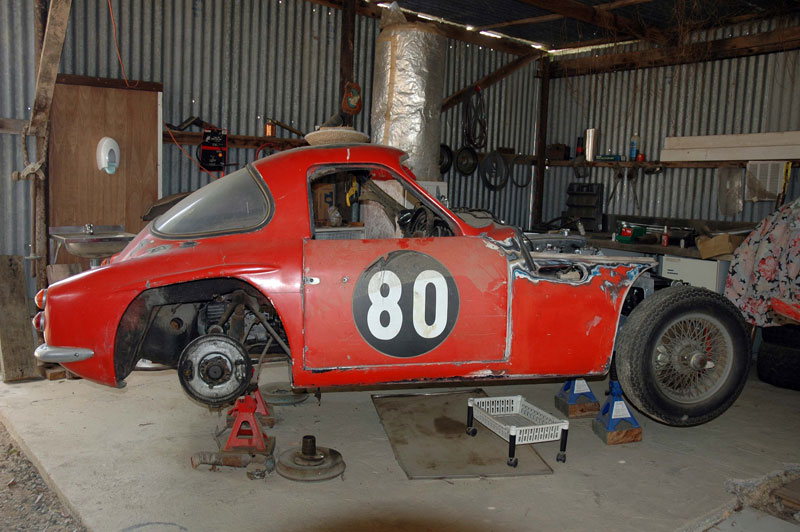 TVR Grantura
A story of rebirth, loss and resurrection

Like many of my generation growing up in the 50s I have always had a soft spot for sporting cars built in small numbers by groups of English enthusiasts, especially the early TVRs. A chance meeting with John Moir took place when he came to look at purchasing my racing car trailer. I asked John "what was he going to put in it", and he mentioned his 1960s TVR Grantura 2A which he had been rebuilding in Brisbane. This I found most intriguing as he outlined his cars specifications and history. Much later, I had the pleasure of being invited to view the car now down in Victoria.


John thinks this TVR was probably imported to Victoria from the UK in the early 1980s by 'someone' living in Kew. It had been registered as a road car over there and was white in colour. Later, it was sold to Carl Stecher who modified it as his race car. John has all the letters from this period seeking compliance from CAMS. One of the problems was that the MGA engine was unusual because it was equipped with a cross flow alloy head and twin Webers, Carl was able to get verification from the MG factory that the Racing Department did supply some MGAs with this equipment.
John used to visit Carl occasionally at his workshop in Hawthorn to buy parts for his E Type Jaguar. Carl worked mainly on Healeys and Sprites and was also involved in scrutineering at Victorian events. When Carl died, John purchased the TVR as a 'basket' case from his estate three years ago, it was part of a large and diverse range of racing cars stored under Carl's house.

John was not only lucky to get his hands on such a rare car but in Brisbane he had access to a complete engineering facility, and this made it much easier to rebuild various components as required. He had completed almost all of the front half of the TVR by the time the decision to relocate to Victoria was made.

Much of the chassis which supported the front suspension was badly corroded and has been replaced, and any weak spots in the rest of tubular frame have been also repaired with webs added for additional strength.

One of the challenges of rebuilding this car has been the fibreglass body, which from the firewall back is bonded to the chassis, to make any repairs to the frame in these areas it has meant that first you have to cut away the fibreglass, then afterwards re-bond the area back into position.

The torsion bar front and rear suspension is similar to the early Volkswagen front end set up and some parts are even interchangeable. They differ in that the cross tubes are set 300mm apart to suit the taller uprights.
The MGA engine has been totally rebuilt with all the components balanced, other improvements include twin 40mm Weber carburetors, a special camshaft and roller rockers, and a stainless steel flywheel. It now only requires a new set of extractors which John will make up from his collection of bends using the old extractors as a guide.

The original fibreglass inner front guards and firewall have been replaced in aluminum, as well as the remote header tank. The pedal box has been duplicated except for the reservoirs which are now mounted remotely in the engine bay. To gain access to the original reservoirs which were part of the brake and clutch cylinders, you had to first remove a panel on the inner guard which made servicing almost impossible. The rebuilt MGA gearbox is back in position and the new aluminum transmission tunnel installed.

The move back to Victoria has interrupted progress on the TVR and further work on the interior has been on hold until the new roll cage is in position. This item is being imported in kit form from the UK which was considerably cheaper than constructing one in Australia.
Where possible TVR used other manufacturers components, the windscreen is from a Ford Consul, the steering box is also a Ford product. Most parts are still readily available and John sees that replacements are not going to be a problem.

As work resumes, the next challenge is to remove the petrol tank which is in an impossible position sandwiched behind the MGA differential and the rear floor pan. The differential which is mounted directly to the rear of the chassis and would have to be removed first. The rear drive uses a modified MGA casing with double universal jointed axles which connect to uprights and are attached to the twin trailing arm torsion bars, similar to the front suspension. The body components are basically sound requiring only minor repairs to the fiberglass and the removal of multiple layers of old paint before being resprayed British racing green.

This story about the resurrection of John's TVR is not complete, Motormaques will bring you further installments as work progresses. John would love to hear from anyone who has further knowledge and photographs of his car or similar Granturas. He can be contacted via the website, motormarques.com.

John has just informed me with the sad news that his car did not survive the the devastating bush fires in Victoria this summer. As often happens with a loss, it is sometimes followed by hope. Since this event, John has received more photos of the car as it was when it first came to Australia, and the possibility of another rear suspension. If he can find further parts, there is a very faint hope that his dream could be resurrected again!