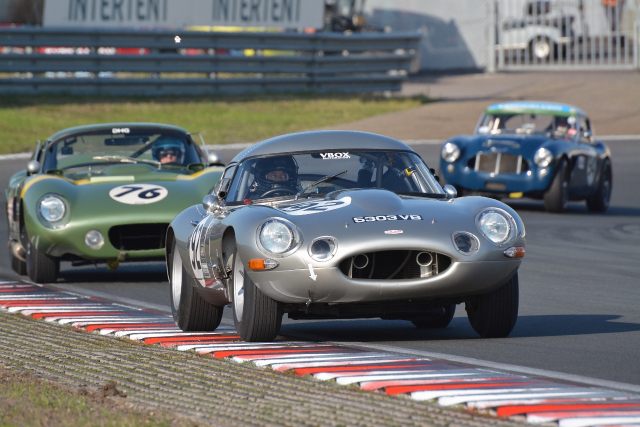 Circuit Park Zandvoort (Zandvoort Racetrack) is perfectly situated in the dunes just a few hundred metres from the Northsea. At this racetrack the seventh edition of the Historic Grand Prix Zandvoort was held and again this event was a true paradise for the passionates of historic racing cars. Historic single seaters, touring cars, GTs, sports cars and side cars were competing on the 4.3 kilometres long racetrack.
The two major event partners for this event were BMW and Porsche. There were some demonstrations by cars from the factory museum collection. BMW showed a BMW M1, a McLaren BMW F1 and the BMW V12 LMR that won the 1999 Le Mans 24 Hours. For Porsche, Gijs van Lennep, Jürgen Barth, Harm Lagaaij and Paul and Max van Splunteren gave demonstrations with the 356 SL, 906, 908/3 and 961.
The DAF Museum was present with the Repco-Daf, the rally verison of the Daf 55 Marathon and from England came the Daf 55 Coupé V8. Also present were the two Ferrari Tipo 156 ‘Sharknose’ replicas with former Ferrari works driver Arturo Merzario behind the wheel.

Just like the previous years several race classes were again present at this event The F3-500 Owners Association for the light Formula 3 cars with 500 cc single cylinder engines had two races of their championship with 22 cars on the grid. After the successful debut last year, the Camathias Cup for sidecars also returned to the program of the Historic Grand Prix Zandvoort with 28 drivers and their passengers.

This year a new race competition started at the Historic Grand Prix Zandvoort, the FIA Historic Formula 3 European Cup. This race series is for Formula 3 cars built between 1971 and 1985. There was plenty of interest from owners of these single seaters as some 30 cars were on the starting grid.

Also new for this event was the Tourenwagen Classics series, the German touring cars that raced in the DTM (Deutsche Tourenwagen-Meisterschaft) from the mid-1980s until the mid-1990s but also the two-litre Super Touring cars that featured in the British Touring Car Championship and the German STW championship in the 1990s. Several marques appeared on the grid for this race like Mercedes C-Class, BMW M3, BMW 635 CSI, Ford Sierra Cosworth RS 500 and Audi A4.

Two race series were combined into one race, the Dutch historic championship for touring cars & GT’s and the Masters Pre-66 Touring Car race. Race 1 on Saturday was the combination of the Dutch touring cars and the Masters touring cars. The NK HTGT touring car race was won by Norbert Gross in the Ford Falcon Sprint while Tom Coronel and Alexander Furiani won the Masters Pre-'66 in the David Hart owned Alfa Romeo Giulia Sprint GTA 1600. Actually it was a shake-down test for the Alfa Romeo (prepared by Alfa Romeo specialist Alexander Furiani) as it would be raced a week later by Tom Coronel en Oliver Hart during the Goodwood Revival. On Sunday race 2 was held with the combination of the Dutch GTs and the Masters Gentlemen Drivers competition. Allard Kalff immediately took the lead in the Corvette Grand Sport. Andy Newall tried to pick up with the Jaguar E-type, but could not follow the pace. Michiel Campagne took over from Allard Kalff and won the Dutch GT race of 29 laps, second was Alexander Schlüchter in the Lotus Elan. The Gentlemen Drivers race lasted 40 laps and a long-during battle took place between Andy Wolfe (AC Cobra) and Nicky Pastorelli in the Ferrari 250 GTO/64. Several laps the Ferrari was in the lead but finally Wolfe could pass the Ferrari. Three minutes later the Ferrari lost it’s oil in the chicane but managed to drive into the pits. The oil caused that several cars spun so the safety car was again on the track. Andy Wolfe won the race, the AC Cobra driven by Alexander van der Lof/Yelmer Buurman AC Cobra took second place while brothers Dale and Aaron Head finished third overall in a Lotus Elan.