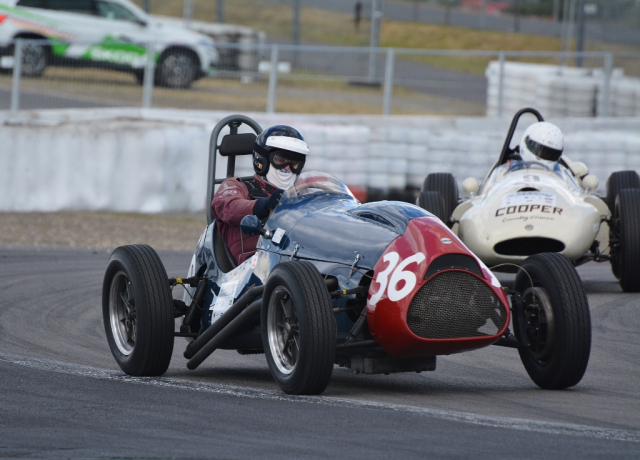 With additional racing series, the AvD Oldtimer Grand Prix took nearly 51,000 spectators on a historic journey of motorsport at the Nürburgring this weekend. Ten races on Saturday and Sunday could be watched on a livestream. A number of renowned companies in 2018 again used the AvD Oldtimer Grand Prix as a platform thereby helping to deliver a festival of historic motorsport once more, for instance at Jaguar Land Rover where at the Jaguar Village historic models were shown. Porsche Classic made a huge appearance at the Nürburgring as well: on the occasion of the brand’s 70th anniversary, the marque from Zuffenhausen had invited two-time World Sportscar Champion and multiple Le Mans winner Derek Bell to drive an early Porsche 911 in the Gentlemen Drivers race. Bell had also the opportunity to present his new book ‘All My Porsche Races’.
Visitors strolling from the Historic Paddock to the Grand Prix Paddock were welcomed by Jaguar. The XJ6 launched in 1968, celebrated its 50th anniversary. This model range was continued up until 1992 and for a some time the XJ12 (it’s 5.3 litre 12 cylinder engine delivered 295 Bhp) was regarded as the ‘world’s fastest saloon’ with a top speed of 230 km/h. On display were the XJ6 of Jaguar’s founder Sir William Lyons and the Queen Mother’s XJ12 Close to the race track was the Porsche Classic area of 16,000 m². This year the focus was 70 years of Porsche sports cars and 30 years of the Porsche 964. With the type 964 model of the Porsche 911, Porsche refreshed one of the most important development steps in the history of the 911. The specialists from Porsche Classic, who specialise in providing spare parts as well as restoring and repairing classic models, were available to answer any questions of the public about genuine parts, technical literature or repairing your vehicle.

117-year history of Skoda
Skoda showed an interesting selection of vehicles from its 117-year history, including several well-known racing and rally cars, often privately owned now. A very special car was the Formula 3 racer, driven in 1968 by the Czech Miroslav Fousek, who took the victory in the Eastern European Formula 3 Championship.
But even the rare Group 5 Skoda 200 RS attracted a lot of attention as just two original cars have survided. From the Skoda factory museum was the flat Roadster 1100 OHC, which a beautiful body. Besides these competition Skoda’s a large number of road vehicles could be seen in the parade on the GP track. More than 500 cars and drivers competed in 15 different racing series. Three of this series can not considered as a historic race serie. First of all, there was the Masters Endurance Legends Series with LMP1 and LMP2 cars from the years 2002 to 2012. The Endurance Legends aims to attract all cars that were eligible to enter the Le Mans 24 Hours or any of its feeder series (FIA Sports Car Championship, IMSA, Sports Racing World Cup, International Sports Racing Series, FIA World Endurance Championship. Second was the FCD Racing Series, a new racing series from the German Ferrari Club. Cars entered in this completion are Ferrari 360, 430 and 458 and the 458 GT2 and GT3. The third series is the Porsche Carrera Cup Germany, with the Porsche 911 GT3 with 485 bhp and a grid of 28 cars with professional drivers.

Evening race as a highlight
For many visitors the most important race of this AvD-weekend is the Saturday evening race for two-seater race cars and GTs up to 1960/61. With perfect weather and picturesque sunset, this race of nearly 50 sports cars was certainly the atmospheric highlight of the weekend. Cars like the Porsche 904 and 356, Mercedes 300 SL Gullwing, Maserati Tipo 63, Aston Martin, Lotus 11 and 17, Lister-Jaguars and Austin Healey competed in this 65-minutes race. From the start of this event 46 years ago the most important race was the race for pre-1960 Grand Prix cars. This year the number of cars entering the race was again less than in previous years. Can this event still be called the Oldtimer Grand Prix with so many series of relatively modern racing cars ? To my opinion the name should be changed into the AvD Historic Racing Weekend.