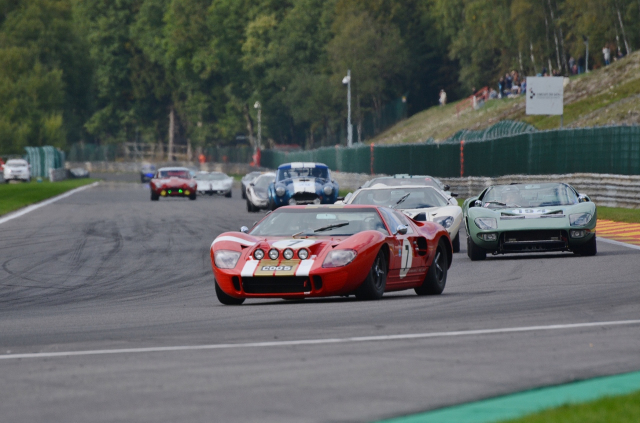 The Spa-Francorchamps circuit was created in the early 20’s using the streets of the three villages Malmedy, Stavelot and Francorchamps. The 14 kilometre race track in the fabulous Ardennes region was completely modernised in 1979 with a more turns and bigger gravel beds. Since 1979 the 7 kilometere long track has been changed a few times but it continues to be one of the favourite circuits for the drivers as well as for the spectators. During the 26th Spa Six Hours weekend the weather conditions event were perfect . The sun was shining all day and the temperature was around 20 degrees Celsius. Ideal conditions for racers and spectators to fully enjoy the Spa Six Hours. More than 600 racing cars from almost every country in Western Europe were transported to the beautiful circuit in the Ardennes area.
The Six Hours Race Highlight of this event is of course the six hours race, since 1993 the time-scheme of this race hasn’t been changed, at 4 o’clock in the afternoon the race starts. It’s a unique race because no other racing event for classic cars offers a race longer then 90 minutes. The other long distance race for classic Touring Cars and GTs, the 4-hour race at the old Nürburgring (organiser the AvD), disappeared from the programme in 2017. This year many drivers complained about the qualifying session for the Six Hours Endurance race as it started on Friday evening at 20.25 hrs in darkness. For some drivers it was their first experience, the circuit in darkness. With over 100 cars – the quickest of which are over 40 seconds a lap quicker than the slowest – on a circuit that’s just 7km long, things can get chaotic to say the least, especially when darkness falls. There were yellow flags and red flags most of the time. Let’s hope the organisers will change this for the 27th edition in 2019.
114 teams qualified themselves for the race, from which 17 cars were Ford GT40s ! On pole was the GT40 of father and son Bryant and James Cottingham followed by ten other GT40s. From 11th position started the Jaguar E-type driven by John Minshaw and Phil Keen. Actual start of the race on Saturday was 16:36 hrs. and from the first lap onwards the battle was on between the GT40s. Especially the first four cars in the lead had a continuous fight. The race of the best qualified Ford GT40 (Bryan-Bryant-Cottingham), lasted just eight minutes due to a broken valve spring. The battle continued between GT40 no.30 (Oeynhausen-Verdonck), no.7 (Davies-Young-Newall), no. 8 (Hart-Hart-Pastorelli) and no. 37 (Walker-Griffith-Shedden). Around 20.30 h. there was a heavy accident, a Jaguar E-Type went off at Blanchimont. The race was neutralised for a long period, the driver was injured and airlifted to the Liege hospital. It was the complete strategy (driving, pitstops, changing drivers, refuelling) which secured the overall victory of the German-Belgium team (Oeynhausen-Verdonck), with a good three seconds advantage over no.7 (Davies-Young-Newall) and no. 37 (Walker-Griffith-Shedden. Since 1994 a Belgian driver (Nico Verdonck) was again on the podium at the Spa Six Hours! The Lotus Elan 26R driven by Pittard-Balfe-Stirling ended in seventh position before six GT40s !

Touring cars
In the Masters Pre-66 touring car race, Mustangs, Lotus Cortinas and Mini Coopers were dominant. Four Ford Mustangs squabbling for first place were interrupted by the only Ford Falcon Sprint driven by the equippe Gardiner/Wolfe. They finished second behind the Mustang driven by McInerney/Keen.

U2TC, the renowned series for pre-1966 under two-litre touring cars was well presented at Spa with 33 cars on the grid. The qualification showed again that a well prepared Alfa Romeo Giulia Sprint GTA was just a bid quicker then it’s rival, the Lotus Cortina. Dutchman Oliver Hart, who just won the touring car race at the Goodwood Revival, was second on the grid followed by Andrew Banks in a similar car. Behind the two GTAs nine Lotus Cortinas qualified themselves. During the race the battle for victory was between the two Alfas but in lap 12 the Banks Alfa showed mechanical problems and didn’t finish the race. 19-year-old Olivier Hart won the race followed by the Lotus Cortina of S. Balfe/A. Wolfe.

The races of the Historic Sports Car Club always show a mixed variety of cars. This year 62 cars qualified themselves for the two races of 30 minutes. Quickest cars in this competition are the sports cars like Lolas, Chevrons and March. Also competing in this series are two Ford Anglias, a Holden Commodore, Lotus Europa and a Triumph TR7. Race 1 was won by R.Brooks in a Lola T282 and in race 2 the victory went to Leo Voyazides in a similar Lola.

The combined race of the "Woodcote and Stirling Moss Trophy" offered a wonderful grid of 56 Sports Cars from the 50s. In this 61 minutes race Oliver Bryant started from pole in the nimble Lotus 15. During the first 11 laps Graham was in the lead but then the alternator failed and his race was over. Chris Ward took the lead and enjoyed the victory in the Lister Knobbly Jaguar.

Gentlemen Drivers Pre-66 GT race
In the V8-stamped field of the "Gentlemen Drivers Pre-66" GT racing car, the victory went to David and Oliver Hart in the Shelby Cobra, just a week after their win at the Goodwood Revival. From the start Michael Gans (sharing his AC Cobra with Andy Wolfe) was in the lead but after the pitstops young Oliver Hart came nearer and finally passed Wolfe in a clutchless Cobra. Five laps from the end, also Simon Hadfield (in the Shelby Cobra Daytona Coupe) was able to pass Wolfe. Nolte-Funke surprisingly took fourth overall place in the Bizzarrini 5300 GT.

Lola mob beaten
It really gets down to business in the field of the "FIA Masters Historic Sports Car Championship", where the many Lola T70s usually dominate the race. This weekend, however, the Banks brothers prevailed in the exceptional ex-Jo Bonnier McLaren M6B. Ollivier Bryant (Lola T70 Mk3B) finished second and Leo Voyazides/Simon Hadfield T70 Mk3B took third.

Motor Racing Legends Pre-War Sports Cars
In the Pre-War Sports Cars races from organisers Motor Racing Legends the cars must be must be close to the original production specification; in ‘road-going’ trim with wings and lights fitted and using ordinary pump fuel. An exception was made for the race at Spa as there was a special invitation class for modified racing ‘Specials’ which are not usually eligible to enter. These cars will be able to run stripped of wings and lights and with other modifications. Among the ‘Specials’ were the enormous 3/8 Bentley Special of Tim Llewellyn , the Parker GN of Justin Maers powered by a 6.2-litre Gypsy Moth aero engine and a 1929 6-litre MENASCO Pirate. Included in the main Pre-War grid of competitors were some more Bentleys, a 1935 Aston Martin Ulster, a 3-litre ex-works Talbot 105 team car and a magnificent 1932 Alfa Romeo 8C 2300 Zagato. German Rudi Friedrichs (1933 Alvis Firefly 4.3) proved to be fastest but during the Friday evening contest the mighty Menasco aero-engined special followed close behind until its gearbox failed. Austria’s Niklas Halusa’s sublime Alfa Romeo 8C 2300 Zagato came through to second place ahead of Ewen Getley in a 1924 Bentley 3/4½.

Again this year visitors of the Spa Six Hours could enjoy a variety of racing series. There is an extensive area to explore and the atmosphere is so relaxed. From the restaurant on the rooftop terrace of the new pitbuilding there is a breathtaking view over the entire course. Visitors are able to stroll through the pit lane and sneak into the pitgarages, enjoy the hectic situations during the pitstops of the Six Hours race or walk the foot paths in the direction of Eau Rouge. So next year plan a visit to this magnificent event !