The BMW Museum in Munich 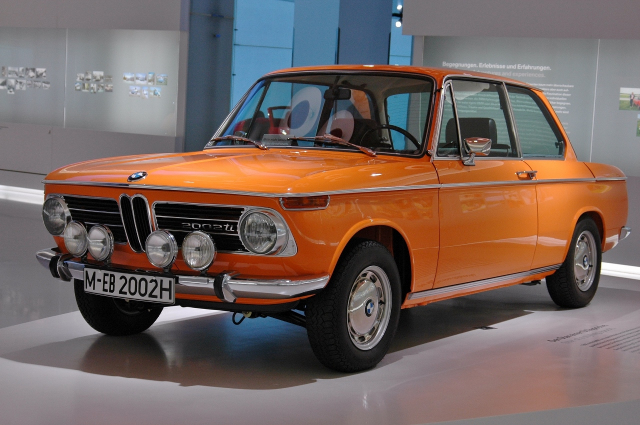 The BMW factories are situated not far from the center of Munich, At the opposite side of the factories are the museum, brand experience centre and head offices. The museum was built at the same time as the new headquarters (the striking four vertical cylinders), in 1973. Since May 1973 the BMW Museum has welcomed visitors from all over the world with a fascinating collection of the motorcycles and cars produced from 1929 until now. From 2004 to 2008 the museum was renovated in connection with the construction of the BMW Welt, a multi-use exhibition center located directly opposite, which is used for meetings and promotional events, and where buyers take delivery of BMW vehicles. Since it was re-opened in June 2008, the BMW Museum has posted record visitor numbers year after year and is proud to be one of the most visited museums in Germany. From the entrance it starts with the earliest products, which were aeroplane motors and motorcycles. Surprisingly, the iconic blue and white logo and lettering hasn’t been changed much since the first World War. The 4,000 m² permanent exhibition space houses a neatly-arranged assortment of the brand’s most significant cars and motorcycles. The BMW Museum also regularly stages temporary exhibitions featuring special vehicles, design exhibits and prototypes from the long and illustrious history of the BMW Group. An absolute must for all car enthusiasts.
BMW History
BMW stands for Bayerische Motoren Werke. BMW became an automobile manufacturer in 1929 when it purchased Fahrzeugfabrik Eisenach, which already built Austin Sevens under licence under the Dixi marque. Aircraft engines, motorcycles, and automobiles would be BMW's main products until World War II. The factory was heavily bombed towards the end of the war, reducing most of the company's production facilities to almost zero. The BMW sites in eastern Germany were seized by the Soviets. After the war BMW was banned from manufacturing motor vehicles by the Allies. Permission to manufacture motorcycles again was given by the United States authorities in 1947, and production of the R24 began in 1948.

BMW motorcycles in the museum
The BMW R32 was the first motorcycle produced by BMW. The boxer twin 494 cc. 8.5 hp engine and shaft drive - became the blueprint for BMW for the next 90 years. 3,090 units of the R32 were built between 1923 and 1926; its success launched BMW into the two-wheeler world. Approximately 60 R32s are thought to be still in existence. The BMW R7 is truly a one-of-a-kind motorcycle that was introduced as a concept in 1934, but never produced. This futuristic bike had a 750 cc boxer engine. It was thought to be lost until it was rediscovered in 2005 (hidden away in a crate for 70 years). In 2005 a two year restoration started and the result is mindblowing. Another special motorcycle is the supercharged BMW WR500. This bike with fully enclosed, streamlined bodywork was driven by Ernst Jakob Henne on a German autobahn on 28 November 1937, when he set a new World Landspeed Record. The average speed was recorded as 173.6mph (279.5km/h). A phenomenal speed for that time; it took another fourteen years before it was officially beaten. Henne pioneered aerodynamics with tight-fitted clothing and a helmet shape that is still favoured by today’s fanatical downhill highspeed-skiers. After this achievement, Henne retired from chasing land speed records but never moved away from the thrill of speed and continued riding bikes. Before he passed away on 24th May 2005, Henne recorded one more milestone by reaching his 101st birthday !

Displayed Motorcars
BMW’s production of automobiles began in 1928, when the company purchased the Automobilwerk Eisenach car company. Automobilwerk Eisenach’s model was the Dixi 3/15, a licensed version of the Austin 7 which was in production since 1927. Following the takeover, the Dixi 3/15 became the BMW 3/15, BMW’s first production car.In 1932, the BMW 3/20 became the first BMW automobile designed entirely by BMW. It was powered by a four-cylinder engine, which BMW designed based on the Austin 7 engine. BMW’s first automotive straight-six engine was released in 1933, in the BMW 303. Throughout the 1930s, BMW expanded its model range to include sedans, coupes, convertibles and sports cars. The model 315/1 was a small Roadster version of the standard 315. In the summer of 1934 the 315/1 was introduced and it was built until 1936. 230 Roadsters were sold. In 1939 BMW offered their short-chassis 327 with the more sportier 6-cylinder engine from the 328. The result was the 327/28 Sport Coupe or Sport Roadster. 482 Sport Cabriolets and 86 Sport Coupes were produced until 1940. The model 335 is a six-cylinder sports sedan produced between 1939 and 1941. The 335 sustained BMW’s reputation for innovation, being the first car with a four-speed gear box with full synchromesh on all ratios. The six-cylinder 3485 cc. produced 90 Bhp. The car was sold as a four-door sedan and also as a two- or (more unusually) four-door cabriolet. One of the most iconic BMW sportscars is the 328, made between 1936 and 1940 (464 produced), with the beautiful body created by Peter Szymanowski, who became BMW chief of design after World War II. The straight 6-cylinder 1971 cc. engine with aluminium cylinder head) produced 80 Bhp at 5000rpm. A very special version of the 328 is the Mille Miglia Touring Coupe. The aluminium bodywork of this car is fabricated on a space frame made from Elektron. In 1940, the Mille Miglia Touring Coupe won the Mille Miglia with an average speed of 166.7 km/h.

After WW II BMW was still barred from producing automobiles, however, the Bristol Aeroplane Company (BAC) was producing cars in England based on BMW’s pre-war models. After WW II, one of the Mille Miglia 328s was taken from the bombed BMW factory by English representatives from the Bristol Aeroplane Company and Frazer Nash. Bristol Cars was set up to build complete cars and the first Bristol, the 400, was much influenced the BMW 328. Production of BMW automobiles resumed in 1952, with the BMW 501 sedan. Throughout the 1950s, BMW expanded their model range with sedans, coupes, convertibles and sports cars. In 1954, the BMW 502 was BMW’s first to use a V8 engine.
BMWs answer to Mercedes-Benz's 300SL and 190SL sport models, was the 507 Roadster which was based on the 502. The 507 Roadster was specifically designed for the US-market. The U.S. BMW-importer Max Hoffman told the BMW management that that he would order 2000 507s if he could sell them for $5,000 each. When the selling price drew out twice as much (and higher than the Mercedes-Benz 300SL), he withdrew his offer. 253 cars of the type 507 were built during from November 1956 to March 1959.
To provide an affordable model, BMW began production of the Isetta micro-car (under license from ISO) in 1955. Two years later, the four-seat BMW 600 was based on a lengthened version of the Isetta design. In 1959, the BMW 600 was replaced by the larger BMW 700 coupe/sedan.

The New Class was a line of sedans and coupes produced by BMW between 1962 and 1977. The first New Class model was the 1500, a 4-door compact executive car with the new M10 OUC 4-cylinder engine. In 1964 the 1600 was introduced as the replacement for the 1500. In 1963 the BMW 1800 was the second member of the New Class family. This model had an M10 engine with a displacement of 1,773 cc. It produced 90 Bhp at 5,250 rpm. The 1800 TI (Turismo Internazionale) was the sporty version developed by the tuning company Alpina. The engine upgrades included dual Solex side-draft carburators and a higher-compression, which gave the engine 110 Bhp at 5,800 rpm. A racing homologation special was introduced in 1964, called the 1800 TiSA. The TiSA's engine had dual Weber 45 mm. carburetors and a 10.5:1 compression ratio. This engine produced 130 Bhp) at 6,100 rpm. The TI/SA also had a Getrag five-speed gearbox, stronger anti-roll bars, and larger-diameter brake discs. 200 examples of the TI/SA were built and were only sold to licensed racing and sports drivers. Displayed in the museum was a BMW 2000TI race car which had been raced by Hubert Hahne with which he won the 1966 European Touring Car Championship. The standard BMW 2000TI had a 1,990cc in-line 4-cylinder engine that produced 120 horsepower at 5,500 rpm.  The engine had a single overhead camshaft and two Solex carburetors.  The 2000TI retained the '1800' taillights and headlights. A more luxurious version was available with rectangular headlights, a more luxirous interior and including a wooden dashboard.

As an entry-level BMW, the 1600-2 made its debut at the Geneva Motor Show in March 1966. The 1600-2 was the first of the "02 Series". BMW was designated, was an entry-level BMW, and was smaller and less expensive than the New Class Sedan on which it was based. In 1968 the model 2002 was introduced. A sportier and faster version was the 2002Ti with the 120 Bhp M10 engine from the model 2000TI. two Solex carburetors and compression ratio.

For the BMW-enthusiast and for the casual visitor of Munich, the BMW museum offers a nicely presented overview of their motorbikes and cars during the last 100+ years.