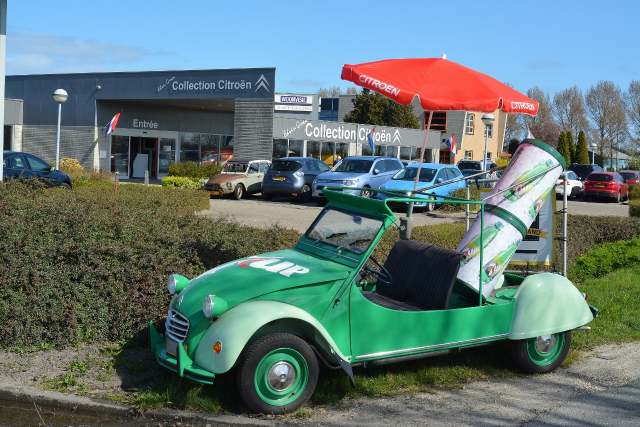 In the top ten of cult cars are the Ford model T, VW Beetle, Mini, Fiat 500 but without doubt also the Citroën 2CV or Deux Chevaux.  The name Deux Chevaux (2 horses) refers to the taxation class of the 2CV. This car was designed to be a ‘two tax horsepower’ car. Nicknamed the ‘Duck’, the car still has a huge number of admirers and owners. There are even collectors of this cult car and most probably the largest collection of Citroën 2CVs can be admired in a museum located in a small village in the Netherlands called Andijk.
Owner of this massive collection of 2CVs is Dutchman Edwin Groen. Edwin’s enthusiasm for the cheapest Citroën all started when he volunteered for a weekend-job as an eleven year old child at the Citroën dealership opposite his parents house. In 1980 he opened a cycle shop which expanded rapidly and during the years he got involved into the real estate sector which placed him into the fortunate position to start his collection of Citroën 2VCs. The first 2CV was bought in 1995, Edwin’s intention was to give this car to his daughter when she passed her driver’s licence. She’s wasn’t charmed of the Citroën nor his other two children. Nevertheless Edwin continued his enthusiasm for the 2CV and cars were bought one after another and the barn got fuller and fuller. He got addicted to the 2CVs !

The collection was moved to the empty premises of a former Citroën dealership in Winkel. More and more 2CVs were purchased and again a larger storage building was needed. The collection moved to a former indoor tennis hall (1600 m2). From 2005 Edwins’ car collection expanded extensively and again a larger storage place had to be found. In 2017 the collection moved to a former furniture warehouse with enough room (5000 m2) to put most of the cars on display. Several months later the museum was realised with a very nice atmosphere as it includes some nostalgic shops, a very cute bar, an old Citroën workshop and Groen’s collection of old mopeds and microcars. In August 2018 the museum opened it’s doors for the first visitors.

Almost 300 cars are displayed, most of them 2CVs but there some other Citroën models like the Traction Avant, Ami, the Dyane, the Mehari, GS, CX, DS and the HY delivery van. Another French marque in the museum is Simca. There’s even a VW Beetle with delivery mileage (179 kilometres). Edwin’s ultimate dream-collection is to have an original 2CV of every version or type in his museum. A huge task if one considers that 2CVs were not only produced in France but in many other parts of the world, like Belgium, Portugal, United Kingdom, Yugoslavia (now Slovenia), Greece, Chile and Argentina.

The oldest 2CV in the collection is a 1949 car with chassis number 000458, it’s one of the very first 2CVs produced, in fact it is one of 876 2CVs that rolled off the production lines as a pre-production car. This car was auctioned in January 2018 in Paris by auction house Osenat. Edwin was informed about the auction and for the first time he decided to bid on a 2CV as he desperately wanted have this car in his collection. It was expected by the auction house to fetch between 12,000 and 15,000 Euros for this 2CV but the bidding was between Edwin and tyre giant Michelin. It was Edwin who finally won the bid, setting a record for a standard model 2CV, 75.600 Euros including the buyers premium.

At the same auction Edwin bought another 2CV, a 1950s car. And it’s a very unusual 2CV once owned by inventor Jean Federspiel. He developed a spring system that was comfortable and able to maintain a constant ride height, in fact it was the first active suspension system, the so-called "Federspiel Servo-brake”. What’s so special about this car is that Jean Federspiel used this 2CV for testing his suspension system. Most of the experimental components are still in the interior. In 1955 Federspiel took his invention to Citroën but it turned out they had already designed something similar themselves! This suspension was introduced on the Traction, but worked most perfectly on the DS. It’s a miracle that this prototype survived.

The twin-engined 2CV Sahara is a rare beast, this model was introduced in 1958 and was intended for expeditions in the French colonies, where four-wheel drive was desirable. Citroën didn’t have an engine strong enough for four-wheel drive, so they decided use two engines. It has an additional engine-transmission unit in the rear, mounted the other way around and drives the rear wheels. For the second engine there’s a separate push-button starter and choke. With a gear stick between the front seats, both transmissions are operated simultaneously. Under the front seats are petrol tanks for each engine. Each engine can be operated separately. The spare wheel is mounted on the bonnet. You could buy two standard 2CVS for the price of one Sahara model. Just 694 Saharas were produced until 1968 and one more in 1971. Less than 30 cars have survived and Edwin managed to track down five cars. Four cars are in the museum and one car is in restauration.

There’s even a 2CV is still in the paraffin wax layer from the factory. This red 1985 model belonged to a German dentist who bought two identical red CVs for his two sons and had them stored until his sons got their drivers licence. Both sons prefered a Peugeot 205 GTI and so both cars ended up in the museum with zero kilometres driven.

2CVs were also produced at Citroën's plant in Slough, England from 1953 to 1960. These right hand drive cars were not only produced for Great Britain but also for South-Africa and Australia. All Slough-built 2CVs were fitted with improved air cleaners and other modifications to suit the bad road conditions found in Australia and Africa, where the 2CV's durability and good ride quality over rough roads attracted buyers. The 2CV sold poorly in Great Britain due to their high selling price. There are two right hand drive cars on display.

In 1967, Citroën launched a new model based on the 2CV chassis, called the Dyane. The exterior is more modern and it was Citroën response to the Renault 4 which sold very well. Between 1967 and 1983 about 1.4 million were built and several Dyanes can be seen in the museum.

Manufactured in France between 1948 and 1988 (and in Portugal from 1988 to 1990), more than 3.8 million 2CVs were produced, along with over 1.2 million 2CV-based delivery vans. All the variants also sold well, the Ami (over 1.8 million); the Dyane (over 1.4 million); the Acadiane (over 250,000); and the Mehari (over 140,000). In total, Citroën manufactured almost 9 million 2CVs and variants. The last French-built 2CV was made on February 25 1988. It was a basic Spécial in a non-standard grey colour - the same shade as worn by the very first 2CVs. Production of the 2CV would continue at the Mangualde plant in Portugal. The last 2CV was built at Mangualde on 27 July 1990. 42,365 2CVs were built in Portugal in the two years following the end of French production.

The 2CV museum in Andijk is a real ‘duck paradise’. For the passionate 2CV owner and every classic car enthusiast this is the place which has to be visited. At moment the museum can be visited the last Sunday of the month from 10.00 h. until 17.00 h. It also possible to make an appointment for a private tour (minimum 20 people). On the museums’ new website http://www.eendenmuseum.nl/ you can find the details.