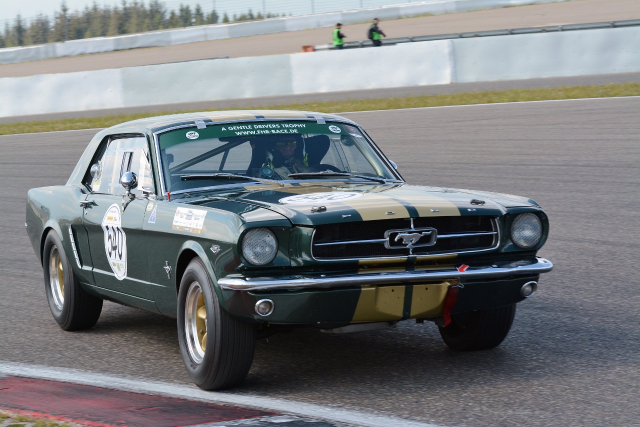 25 races and more than 800 starters provided a large and varied program of the third edition of the "Nürburgring Classic". The event’s main sponsor of the Nürburgring Classic was the Swiss luxury watch manufacturer Richard Mille. The weather turned out much better than the predictions on the various media. Friday and Saturday were even very sunny. Despite the weather conditions, the event was not so well-attended as the grandstands were almost empty on Sunday. For visitors Saturday was the best day to drive to the Nürburgring as the most interesting races could be watched that day. Included in the entry fee was access to the paddock area which gave the visitors the opportunity to view the racecars even better.
This year there weren’t any proper races on the Nordschleife like the years before when the big field of Youngtimers drove the Green Hell. Instead, the big field of Youngtimers was divided into two separate groups for two races on the Grand Prix circuit. In group 1 the duo Schmersal-Stursberg won the race in a Ford Escort RS1800. Daniel Schrey in the yellow Kremer Porsche 935 K1 won the race in group 2.   The best race this weekend was the FHR Dunlop Endurance Cup, a 2-hour race starting on Friday at 20.00 hrs. it was the premiere for this series to start in the evening. On the starting grid were 41 cars and 23 cars reached the finish at ten in the evening.   The Battle of the Dwarves is a race for small touring cars with an maximum engine capacity of 1300 cc. This series was launched in 1992 and originally it was a competition between Fiat Abarths, Mini Coopers and NSUs. Over the years, the series has grown considerably and it is currently Germany's largest sprint racing series. Nowadays other marques are also allowed like the Simca 1000 Rally 2, Fiat 128 and Hillman Imp.   The racing series "A Gentle Drivers Trophy" had two races this weekend, especially the race on Sunday was exciting as the two cars in the front had a great fight. Finally Christopher Stahl in the TVR Grantura won the race but only with an incredible half-second advantage over Markus Jörg in the Lotus Eleven.   The vintage cars (built between 1910 to 1949) had their own meeting point at this event, the old paddock. The old paddock was a magnificent place to be with more than 80 cars like Bentleys, Bugattis, Rileys, Wolseleys and the big Mercedes SSKs. There was a regularity run for these magnificent cars.   Pictures Guus Docen
Tweet
View the embedded image gallery online at:
https://www.motormarques.com/news/european-desk/item/773-n%C3%BCrburgring-classic-2019#sigProId181ce719df