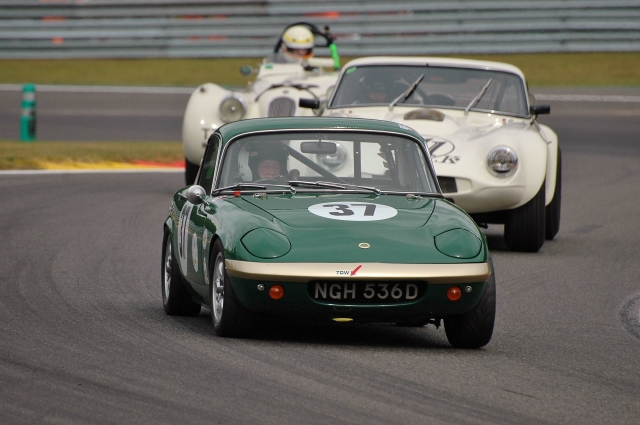 The Spa-Francorchamps is possibly one of the most challenging circuits that exists today. The track is twisty and hilly and has lots of sharp inclines. It is a short run from the starting line to the first hairpin La Source from there drivers race down a moderate straight to the point where the race track crosses the Eau Rouge stream. Most F1 drivers will claim that its one of most challenging sections of any existing circuit. No wonder that the drivers of historic racing cars want to compete on Spa-Francorchamps. One of the opportunities to do so is the yearly event “Spa Six Hours".
The Six Hours Endurance race
Undeniably, the main attraction of this event is the six hours endurance race. The experience of the start of this race with 108 cars is worth every penny. There are touring cars and GTs all from the pre-1965 period. Most attention is drawn by the eleven Ford GT40s. As expected the Ford GT40s dominated during qualifying on Friday afternoon. With two ex-Formula One drivers on board the expectation was that the number 16 GT40 of Gerhard Berger, Paulo Barilla and motoring-journalist Richard Meaden would be the quickest. Indeed this white GT40 started from pole just under two tenths quicker than the Bryant-family GT40. Quickest of the non-GT40s was the Jaguar E-Type of Jon Minshaw and Phil Hindley, they had a best qualifying lap of 2.49 min. Considering the slowest GT40 did a lap in 2.47 min. everybody expected the race would be a GT40 show. The first hour of the race was marked by several incidents. Even the GT40 in pole position didn’t finish the race as the ball joint of the front suspension broke of at the chicane of Les Combes! The only thing Gerhard Berger could do was to drive the GT40 in the tire wall. The last two hours of this race are held in complete darkness and the atmosphere becomes magical, the glowing brakes are a visible sign of how hard the technique is pushed lap after lap. The spectators can observe the different light designs. Unfortunately more and more historic cars use LED and xenon lights to improve visibility. From the perspective of security it’s understandable, but not what one expects during a historic race. As the race progressed the GT40 driven by Chris Ward and Andrew Smith set the fastest lap-time but they finally they ended up far down on the list (66th place) as the car had an accident resulting in a damaged front end. Seven pitstops were necessary to keep the car running. The GT40 shared by Jason Wright, Michael Gans and Andy Wolfe won the 2016 Spa Six-Hours race by a lap. The GT40 of Wood-Stretton finished in second place and third was the Davies-Young-Newall GT40. The best non-Ford GT40 was the spectacular TVR Griffith Whitaker-Reuben-O'Brien, finishing 4th overall. The GT40 driven by Meins, Millingstone and WTCC star Rob Huff completed the top 5.

Gentlemen Drivers race
Thirty-six cars entered the 90-minutes race driven on Sunday-morning. Four teams were having a fierce battle. The pole-position AC Cobra driven by father and son Bryant, the Voyazides/Hadfield Shelby Daytona Coupé, David and Oliver Hart in the AC Cobra Daytona Coupe and Michael Gans/Andy Wolfe in the AC Cobra. David Hart took the lead from the start from pole standing Oliver Bryant. Half an hour later Malcolm Paul crashed hisTVRGrantura in the daunting Blanchimont corner and the safety car entered the track. During this caution period David Hart entered the pits too early and had to come in once again for the drivers-change and re-fuelling. Bryant took the lead but soon young Oliver Hart followed close behind and put the pressure on Bryant. During the next laps both cars increased the distance to the equippe lying in third place, Leo Voyazides/Simon Hadfield in the Shelby Daytona Coupé. Oliver Bryant beat the father-and-son team of David and Oliver Hart by seven tenths and won the 90-minute Stena Line Gentlemen Drivers race. After the race there were some comments from the other drivers about the winning Bryant team as Oliver Bryant drove the 90 minutes race almost on his own leaving just a few laps for his (slower) father to drive. The tone of the criticism centred on the perceived unsportsmanlike conduct: this isn’t gentlemanly behaviour, the other teams can also decide to let the more professional driver drive almost the entire race.

Masters Historic Sports Cars
Forty-two cars on the starting grid of which eight cars were the Lola T70 Mk3B. During qualifying all attention went to the Porsche 917 of Monteverde/Pearson, but the team did only a few practice laps in the red mid-engine twelve cylinder car. In the race Martin O’Connell (Chevron B19) took the lead but when he crashed at the top of the Raidillon, Oliver Bryant (Lola T70 Mk3B) took over the lead. In this race pit strategy played a significant role as both Lola T70 Mk3Bs of Nicky Pastorelli and Oliver Bryant drove into the pitlane three minutes before the pit window opened. Bryant corrected the mistake on the next lap but David Hart – now in the Lola – didn’t. Hart crossed the finishing line first, but he received a time penalty for his mistake and they moved from the top of the podium to the fourth position. So the Bryant-team claimed the victory. Second place was for Danny Gibson/James Littlejohn (Lola T70B Mk3B). Third position was for Manfredo Rossi in the Osella-Abarth PA1.

Woodcote Trophy & Stirling Moss Trophy
Two race trophies in one race at Spa, the Woodcote Trophy is open for sportscars of the post-war era, up to December 1955. The Stirling Moss Trophy is open for pre-1961 sports cars. Fifty-four beautiful cars formed Saturday afternoon’s race grid, on pole-position was the ex-Phil Hill/Wolfgang von Trips NART Ferrari Dino 246S driven by Sam Hancock. Second on the grid was New-Zealander Roger Wills in a Lotus 15, as Mark Lewis and Jamie McIntyre had their Chevy powered Lister Knobbly third on the grid. Mark Lewis took the lead but in lap 5 Hancock moved the Ferrari ahead. Suddenly the Ferrari was out of the race as the engine lost too much oil. Roger Wills and Kremer took over the lead until their mandatory stops. William Nuthall, in Wood’s Lister Nobbly, managed to move to the front and was able to keep the lead, he even extended his advantage over McIntyre’s Lister Knobbly V8 from 15 seconds to almost 20 seconds when the chequered flag fell.

U2TC/HTCC combined race
Particularly impressive was the starting grid of the combined race of the Historic Motor Racing News U2TC and Historic Touring Car Championship. U2TC is the renowned series for pre-1966 under two-litre touring cars and is considered by many to be the finest classic touring car series in Europe concerning car preparation and driving standards. The Historic Touring Car Challenge is for Group 5 cars up to 1969, Group 2 cars up to 1981 and Group A cars up to December 1990. Fifty-five racers qualified themselves for the race on Saturday. The start was divided in two groups. After a couple of laps the pre-1966 touring cars mixed themselves with the faster Group 1 cars and group 2 cars like the 3 litre Ford Capris, Rover SD1 3500, Chevrolet Camaros and even an AMC Javelin !

Masters Pre-66 Touring Cars
Starting from pole, Craig Davies (Ford Mustang) led from start to finish. Leo Voyazides/Simon Hadfield (Ford Falcon) closely followed the Mustang until the engine overheated. The Greek-Anglo team had to retire. Former FIA WTCC-champion Rob Huff drove a Ford Falcon which he shared with Trevor Buckley. They finished second nearly four seconds behind the winning Mustang. The Alfa GTAs of Alex Furiani and Andrew & Max Banks ran third and forth and both teams showed their drifting skills. Furiani won the battle, even though the Banks GTA  was never far away.

Single seaters
Just like the previous years there were races for single seaters at the Spa Six Hours. Both the Historic Grand Prix Cars Association and the FIA Masters Formula One had two races of 30 minutes each. The latter races were won by Nick Padmore in the Williams FW07C while the HGPCA races were won by Peter Horsman (Lotus 18/21) and Rod Jolley (Cooper T44 / 51) respectively. The two races within the Formula Junior Historic Racing Association with over forty participants were won by Wilson in a Lotus 20/22 and Jackson in a Brabham BT2. The first race in particular remained exciting until the end.

The 2016 edition of the Spa Six Hours meeting again turned out to be a great 3-day event of hundred percent car nostalgia and driving passion. The weather conditions were much better then expected so the visitors showed up in their droves, especially on Saturday for the impressive Six Hours race. Thumbs up for the organisers of this event, the Roadbook Organisation.