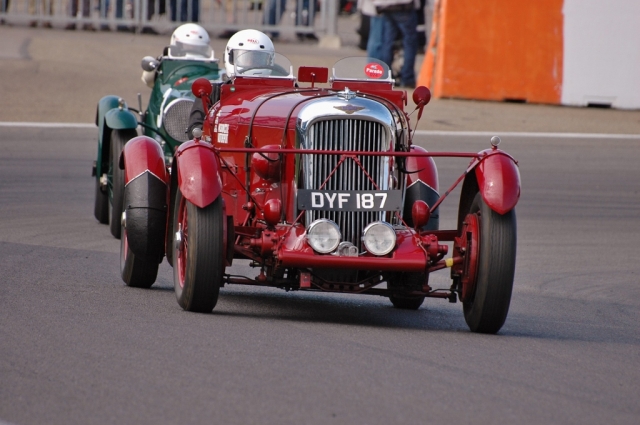 The fifth edition of the Historic Grand Prix Zandvoort was again a fantastic event for motorsport enthusiasts. The weekend offered spectacular races of formula cars, saloon cars and GTs, trade stands with interesting automobilia and expositions of rare motorcars. Around 30.000 visitors found their way to the circuit in the dunes. The weather conditions on Friday and Saturday were fine and although the weather forecast for Sunday was not that positive, most of the Sunday was dry with just two short moments of rainfall. Free practice and qualifying for the twelve different classes started on Friday and Saturday. The program offered a total of 19 races and several demonstration runs.
Masters Pre-66 Touring car race
Touring car racing as it used to be in the 60s, with a class structure based on engine size, Ford Falcons take on Mustangs, Lotus Cortinas tackle the BMW TiSAs and the Mini Coopers take their advantage when the tarmac gets wet. During the year the races for this championship are held at 5 circuits, Zolder, Brands Hatch,  Donnington Park, Zandvoort and  Spa. At Zandvoort 17 cars appeared on the grid of which 10 cars were Lotus Cortinas.
Carlos Monteverde (Lotus-Cortina) led from the start of the 60-minute race but in lap two Andy Wolfe (Lotus-Cortina) took over the lead. Young Olivier Hart was in third position but he was given a drive-through penalty because of a jump start. This meant that the Cortinas of Andrea Stortoni and Mark Martin moved up to third and fourth positions. The overall winning victory was for the team of Gans/Wolfe. Second place for Martin/Haddon and third place for Andrea Stortoni

FIA Masters Historic Formula One
Both races were won by Nick Padmore (Williams FW07C) but behind him were three other drivers whom could keep the distance to Padmore most of the race within 4 seconds.  These drivers were Christophe d’Ansembourg (Williams FW07C),  Greg Thornton (Lotus 91) and Stefano Di Fulvio (Tyrrell 012). Michael Lyons (Hesketh 308E) started from the pitlane and immediately stormed through the field and was already in seventh position by lap 6. He finished fifth overall. The second race on Sunday was almost a copy of the Saturday race except that Christophe d’Ansembourg couldn’t keep up the speed with Thornton and Di Fulvio. Thornton finished 1.3 seconds behind Padmore followed by Di Fulvia 7.7 seconds adrift. The only Dutchman in the race, Frits van Eerd (March 761) finished in 12th position in race 1 but had to retire in race 2 with gearbox problems.

The Gentlemen Drivers race
A guaranteed crowd puller is the Gentlemen Drivers race of 90 minutes and it lived up to expectations! In practice father and son Hart were unbeatable in the Cobra Daytona Coupé. During the race the AC Cobra of Michael Gans and Andy Wolfe closely followed the Cobra Daytona. Leo Voyazides survived an early spin in his Shelby Daytona and didn’t seem to have any chance of a place on the podium. But after 25 laps the safety car entered the track and Voyazides decided wisely to drive into the pits for the driver-change. Co-driver Simon Hadfield could finish the race beating Olivier Hart and the Gans-Wolfe Cobra.

The Masters Historic Sports Car race
The safety car again played an important role in this race after an engine blow up of the Ferrari Daytona driven by Nicky Pastorelli in the Audi-S corner. Litres of oil had to be removed from the tarmac. During the start of the neutralization of the race Voyazides was still in sixth position but again he entered the pits and Simon Hadfield took over. With Hadfield at the wheel of the Lola T70 Mk3B the Anglo-Greek team moved forward through the field closely followed by the small 4-cylinder Lola T290 driven by Michael Gans. After 30 laps Simon Hadfield took the chequered flag just 0.565 seconds in front of Michael Gans.

NK HTGT race
The Dutch Championship for Historic Touring Cars and GTs (NK HTGT) from the period 1947-1965 is one of the most enjoyable races of this event.  Two races of 25 minutes were held during this weekend. Forty-nine cars showed up on grid saturday-afternoon. On the front row was the mighty Corvette Grand Sport driven by Michiel Campagne and next to him Alexander van der Lof in the 1965 Bizzarrini 5300. Race 1 was won by Alexander van der Lof followed by Michiel Campagne. Dierck Adoms lost control of his MGB in the Hans Ernst corner and the car rolled over several times. The safety car entered the track and code red was given. Without any injuries Dierk Adoms was rescued from the wrecked MGB. Michiel Campagne won race 2 on Sunday.

Formula 3
The Historic Grand Prix Zandvoort welcomed this year two historic Formula 3 series. The 500cc Formula 3 cars are from the period 1946 to 1961. The "500"s began in 1946 as a way for "impecunious enthusiasts" to go motor racing using 500 cc motorbike engines instead of the larger capacity engines that prevailed prior to the war. The idea caught on and was adopted as a new Formula 3 in 1950. The 500cc formula was the usual route into motor racing through the early and mid-1950s. Well known names raced in 500s including Stirling Moss, Ken Tyrrell, Collins, Don Parker and Bernie Ecclestone! John Cooper, along with most other 500 builders, decided to place the engine in the middle of the car, driving the rear wheels. This was mostly due to the practical limitations imposed by chain drive but it gave these cars exceptionally good handling characteristics which eventually led to the mid-engined revolution in single-seater racing. Other notable marques are Kieft, JBS and Emeryson in England and Effyh, Monopoletta and Scampolo in Europe.
The 1000cc Formula 3 class was new for this event. At Zandvoort the races for both the HSCC Historic British F3 Championship and the Historic F3 1000cc European Trophy were held. These 1000cc Formula 3 single seaters were driven from 1964 until 1970. Most of these cars use a Ford Anglia engine with a special 2-valve Cosworth or Holbay OHV down-draught head. These short stroke engines are capable to rev very highly and were popularly known as "screamers". Well known manufacturers were Brabham, Tecno and March. World-famous formula 1 drivers Jackie Stewart, James Hunt, Emerson Fittipaldi and Alan Jones started their career in these small single seaters.

The Motor Racing Legends Pre-War Sportscar race
In this race series cars must be close to original production specification although some degree of modification is permitted.  All the famous pre-war marques are represented like  Alfa Romeo, Alvis, Aston Martin, Bentley, Bugatti, Frazer Nash, Lagonda, MG, Riley and Talbot. At Zandvoort Briton Charles Gillett won the race in his 1929 Frazer Nash Super Sports. Motor Racing Legends is the organizer of this race series and after the race chairman Duncan Wiltshire had a meeting with the competitors and the conclusion was that everyone was impressed by this meeting and next year they want to take part again with a larger grid.

During the fifth anniversary of the Historic Grand Prix, beautiful cars and spectacular races brought back the memories of the past for the older visitors. Parents and grandparents could show their children and grandchildren motor racing heritage. The 2016 Historic Grand Prix HGP was again a memorable event of racing nostalgia.