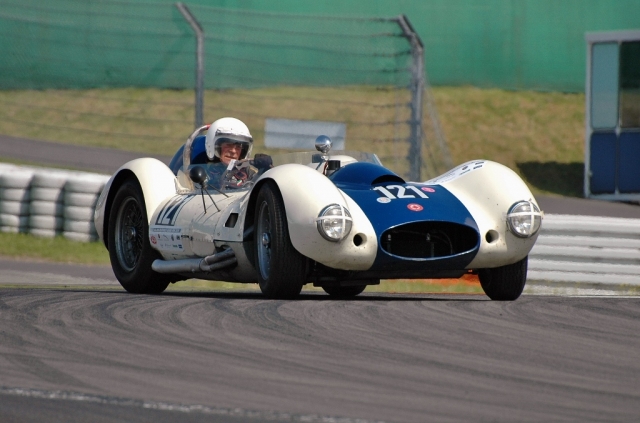 During the past years the programme of this event was more or less identical. From the 44th edition of the event things are changing as explained by the chairman of the AvD (German Automobil Club), the organiser of this event. “We are going the right direction with the future of this event, a new generation of drivers is gradually replacing the older drivers and that also implies that more and more younger cars will appear on the starting grid. This will also change the average age of the visitors who will be more interested in the racing cars of the eighties.”
Presentations and demo laps are traditionally part of the AvD Oldtimer Grand Prix programme.A new demo-presentation called Slow Sideways was introduced, some older rally cars showing their performances on the racetrack asphalt. Porsche kicked off this presentation to celebrate the 40th anniversary of the first transaxle models, a parade of these sportscars built between 1976 and 1995 hit the track. Opinions on the 924, 928, 944 and 968 still differ today as, in contrast to the legendary 911, the engine sits in front. Yet some 400,000 transaxle Porsches were sold and make these models an important part of Porsche history. Fascinating collections of racing cars were brought to the Nürburgring by Skoda and Opel as well. They were displayed in the paddock but also showed their skills on the track during the weekend.As an official partner of the AvD Oldtimer Grand Prix, Skoda supported the event but also celebrated their 115 years of motorsport history. In the paddock, the fans and spectators could admire 36 treasures from the Skoda Museum in Mladá Boleslav.


Masters FIA Historic Formula One Championship
Last year it was Belgian Loïc Deman who draw all the attention in the Masters FIA Historic Formula One series but this year Nick Padmore is the growing star in this exciting championship. This season he’s driving a Williams FW07 owned by Max Smith-Hilliard. Padmore qualified the Williams at 1.36.377 followed by Deman at 1.37.096.
Padmore let the first race on Saturday, building a gap of around 4.7 seconds to Loïc Deman’s Tyrrell 010. Steve Hartley (Arrows A4) took third place. Padmore also won race two, but Deman pushed the Williams driver from start to finish on a set of fresh tyres. It was an exciting race but Padmore kept the lead beating the Belgian by just a tenth of a second. Simon Fish (Ensign N180) finished in third position. Michael Lyons wasn’t successful this weekend as the Hesketh 308E had gearbox problems in race 1 and rear brake problems in race 2. Nick Padmore is leading the championship with 78 points followed by Deman with 64 points.


FIA ​​Masters Historic Sports Car race
Nick Padmore also played a prominent role in the Masters FIA Historic Sports Car race as he left from pole position at the wheel of Smith-Hilliard’s Chevron B19. Padmore drove the first stint but after the owner took over, the car retired with gearbox problems.
Manfredo Rossi di Montelera grabbed the lead and took his first win in this series with his Osella PA1 although the Osella suffered with brakes issues at the end of the race. In second place finished Jason Wright in his Lola T70 Mk3B followed by Mike Donovan in a similar Lola.


Driving in the twilight
The evening race of the two-seater racing cars and GTs until 1960-61 is one of the undisputed highlights of the 44th edition of the AvD Oldtimer Grand Prix.
There were 39 cars on the starting grid of which three cars didn’t correspond the 1960-61 time range: the ISO Bizzarrini (1965), the Ginetta G4 (1965) and the Matra Rene Bonnet (1964). One of the organizers of the race, Graf Hubertus Dönhoff explaned "If you permit younger cars in a race class some of the drivers of the older models will get irritated but this year the field for this race was so very mixed that no direct comparison was possible. No one gets offended when overtaken by a car which is a few years younger. Some of the older cars like the Sadler and the Lister-Jaguar are so powerful that there isn’t even a chance that they will be passed by one of the younger cars”.
The race started at 20.30 hrs and soon the cars drove into the sunset which gave the participants but also the spectators the real Le Mans feeling. "Driving this race, is simply the most beautiful thing you can do," said Felix Haas, who drove a Lola Mk I. At 21.35 hrs. the chequered flag fell and Mark Lewis (Lister Chevrolet) won the race followed by Julian Majzub in the American Sadler Mk III. Third place was secured by Tony Wood and William Nuthall in a Lister-Jaguar Knobbly.


Revival German Racing Car Championship 1972 - 1981
Both father and son Mücke competed in the Revival German Racing Car Championship for modified touring cars and GTs from 1972-1981. The 69-year-old Peter Mücke drove the 540 hp Ford "Zakspeed" Turbo Capri (1745 cc, built in 1980) and son Stefan drove the Ford Capri RS 3100 Cosworth (3400 cc, built in 1974, 450 PS. In race 1 Peter Mücke left from pole position and immediately drove the fastest lap of all 30 competitors – but soon he was out of the race as one of the half shafts broke. It was Ralf Kelleners who won the race in a Tomaso Pantera. A remarkable moment, a Pantera finishing a race and winning it also ! Stefan Mücke took the podium behind Ralf Kelleners and the third position was for the fat Porsche 935 driven by the equippe Beck-Thibault. In the second race Stefan Mücke took the lead but after 4 laps also the Capri RS3100 suffered from a broken half shaft ! Meanwhile Peter Mücke moved from the back of the field to the front and again made the fastest lap. Leading the race by eleven seconds on the Porsche 935 disaster struck again. Peter had to stop as the engine ran hot because of a damaged waterpump. Beck-Thibault won the race, second place for Ralf Kelleners (Tomaso Pantera) and third place for Michael Kammermann in a BMW M1 Procar


Historic Grand Prix Cars until 1960
24 cars were on the starting grid for race 1 of the Historic Grand Prix Cars championship. One of the fastest cars, the Lotus 16 driven by Philip Walker, was abscent. The car had a front suspension failure and couldn’t be repaired as some new components were not present. After a troublesome 2015, Julian Bronson’s Scarab-Offenhauser was in fine order and he won race 1 followed by Tony Wood in the Tec-Mec Maserati. Third place was for Tony Smith in his Ferrari Dino 246. Bronson and Wood also finished first and second in the second race on Sunday. Running in third position Tony Smith had to retire with a broken gearbox. Good luck for Josef Otto Rettenmaier in the Maserati 250F, who could finish in third position.

During the weekend of the 44th edition of the Oldtimer Grand Prix 50,000 visitors made their way to the Eifel area to watch historic racing at the Nürburgring. The weather conditions during this weekend were excellent with lots of sunshine and temperatures around 25 degrees Celsius. As already mentioned, the programme was quite different from the previous years. A great disappointment is the withdrawal of the 4-hours endurance race, held on the Nordschleife. Also the number of entries for the touring car race (24 cars) was disappointing. Sadly a couple of visitors weren’t able to drive home in their classic car as four historic vehicles (three Porsches and an Alfa Romeo) got stolen from one of the parking lots. According to the police a group of criminals were on the hunt for specific models. So visitors for the Oldtimer Grand Prix of next year, be prepared when you drive your classic treasure to the ‘Ring’ and use some sort of anti-theft device when you leave your car at the parking lot !