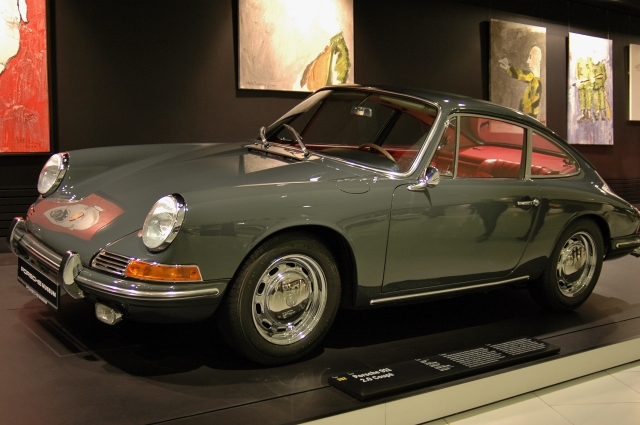 The Porsche Museum is located on a busy junction just outside the Porsche factory complex in Zuffenhausen, Germany. The museum opened in January 2009 and it replaced the old museum which was established in 1976. Designed by Vienna-based Delugan Meissl Associated Architects, the architecture is highly modern, one could even say futuristic. The building features a futuristic 5,600 square meters exhibition space with over 80 legendary automobiles on display.
As a dynamic automobile museum, the Porsche Museum presents special exhibitions on a regular basis and visitors always find something new to discover. In April 2015, Germany’s most famous rock musician, Udo Lindenberg, had his exhibition "Porsche, Panik, Power" at the Porsche Museum. Over 20 years ago Lindenberg started painting. Today he’s presumed to be Germany’s most successful pop-art-artist. The exhibition showed pictures, installations and several exhibits out of his private collection, stations of his career, his social engagement and his artistic work.

The Egger-Lohner electric vehicle
In 1898 Ferdinand Porsche(1875-1951), developed a drive system for a Lohner carriage,based on fitting an electric motor to each rear wheel without transmissions (hub mounted).
The official name of this vehicle is the “Egger-Lohner electric vehicle, C.2 Phaeton model,” but it’s unofficial name is “P1”, because it was built by Ferdinand Porsche himself, who stamped “P1” standing for Porsche 1, on all the major components. It’s historically important, not only because it was the first car to be built by the founder of the Porsche company but also because it’s the earliest electric motorcar built. Recovered from a warehouse where it languished forgotten for over a century, it’s now exhited in the museum telling the early history of Porsche and its founder. There’s not much left apart from the chassis and the heavy, wooden dash. The tires, seats, body and floor are all gone, and what's left looks more like a hay cart than a car, but the museum has fitted what remains with a translucent blue plastic body to give some idea of what the P1 looked like in its glory days.

The KDF Berlin-Rome competition car (Porsche Typ 64)
The NSKK (Nationalsozialistisches Kraftfahrkorps, National Socialist Motor Corps), a paramilitary organization of the German Nazi Party, organized the Berlin-Rome road rally in September 1938. For this road rallya project was started to create a KdF's Berlin-Rome competition car. It was Ferdinand Porsche who designed these cars. The first KdF Berlin-Rome competition car, chassis number 38/41, was finished on August 19, 1939. Thanks to the streamlined body, the small 4-cylinder aircooled 1100 cc flat engine was capable of achieving more than 130 km/h average speed on drives between Stuttgart and Berlin. The top speed was 153 km/h. Eventually three cars were built and one car has survived. Since 2008 this car is owned by the Schörghuber company. The body in the museum is a recreation. This replica body was made by Karosseriebau Drescher took the job to make a replica body. It took 1.5 years to make it. The body was stamped with 38/42, although it has nothing to do with the original 38/42.

Porsche 360 Cisitalia
The Porsche 360 Cisitalia is a Grand Prix car designed by Ferdinand Porsche and ordered by the company Cisitalia (short for Consorzio Industriale Sportive Italia) from Italy. The car was commissioned by Piero Dusio in 1946. Dusio paid a large sum of money up front, part of which was used to free Ferdinand Porsche from the French prison in which he was being held effectively for ransom. Dusio gave Porsche only 16 months to complete the car which proved too short a time to sort out the advanced design.

The first prototype was built in Italy by Cisitalia personnel with help from former Porsche employee Robert Eberan von Eberhorst. The chassis was of made of chromium-molybdenum tubing and featured on/off four wheel drive with a sequential gear-shift and a rear mounted transaxle also sending power through a driveshaft to a front differential. Porsche's experience with the pre-war Auto Union Grand Prix cars showed through in the layout and design of the Cisitalia. The engine was a mid mounted supercharged 1,492 cc flat 12 cylinder engine developing 300 hp at 8,500 rpm and capable of reaching a top speed of 300 km/h (186 mph). Later bench tests showed about 385 bhp (287 kW) at 10,500 rpm ! By the time the only prototype was finished Dusio was out of cash and the car languished in development. Dusio emigrated to Argentina in 1950 and the finished car was shipped off to Argentina. In 1953 it was on the road for the first time. It achieved the South American Speed Record with 233 km/h, far away from the expected top speed of 300 km/h.

The car was sold in Argentina but later came back to Germany, where it is now on display at the Porsche Museum. All the parts for a second car were indeed produced, but never assembled. These parts remained in Italy, in the abandoned factory buildings in Turin. In the late sixties all the parts were salvaged by Corrado Cupellini. He planned to complete the car and get up and running but he failed. In 1971 Cupellini advertised the car in the English journal MOTORSPORT and received three months later a call from England - from collector Tom Wheatcroft. Wheatcroft bought the parts for 8,000 Pounds and commissioned the British bodywork specialists John Cole to fabricate a new body. Next, he put together the engine to the drive train and put the noble torso in his racing museum in Donington.

It was Martin Schröder, the curator of the Museum PROTOTYP in Hamburg who managed get the car to be presented for one year from 2008 to 2009. In the spring of 2009 the car was delivered to the UK Classic Car specialists Hall & Hall as Tom Wheatcroft asked them if they could complete the car and bring it back up to running condition. In other words a complete ground-up restauration. In October 2009 Tom Wheatcroft passed away and the project came to a halt. In December 2009 Martin Schröder visited Hall & Hall with German car collector Jürgen Ernst and they were told that the whole project was for sale. Schröder convinced Ernst that this was a unique project so an offer was made.
On the 10th of March 2010 the agreement with Kevin Wheatcroft was signed. The complete project was collected by specialists Crosthwaite & Gardiner (well known for their recreation of the Auto Unions). They are studying the project in detail and make a quotation for both, the period and the funds needed to complete the most complex GP car design of all time and to make it a running car. The plan is to complete the existing engine and to build a new one delivering the 400-450 hp expected by the designers, to race it and to demonstrate the superiority of its design. The current state of the project is unknown.

Porsche 597 Jagdwagen
The Porsche 597 Jagdwagen (the 597 hunting car) was a light military vehicle, designed for off-road use just like the Jeep and Land-Rover. Originally developed as a prototype for the German Army after World War II, the car never reached mass production after the DKW Munga was chosen over it for reasons of economics. The car was propelled by a Porsche 356 engine. A total of 71 Porsche 597s were manufactured, between 1955 and 1958, 49 of which were built for the civilian market (chassis numbers starting from 597-000101).