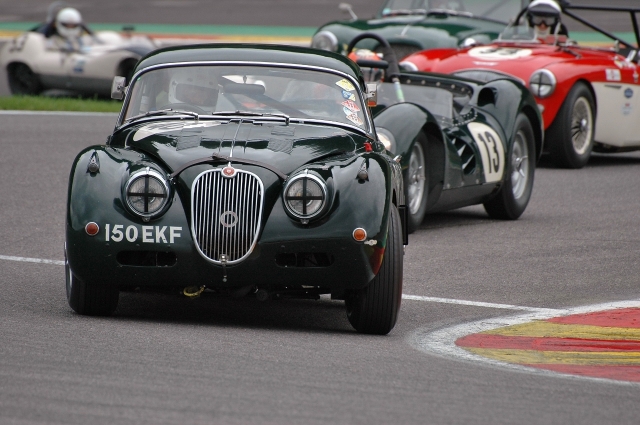 The original Circuit de Spa-Francorchamps was based on public roads running between the villages of Francorchamps, Malmedy and Stavelot in the Ardennes forest. Motorbike racing began at the track in 1922, and three years later it held its first Grand Prix. It was part of the original world championship calendar in 1950, but even for its time, the 14-kilometre long circuit was fearsomely fast and dangerous. The length and layout was retained until 1970. Most of the cars which compete during the Spa Six Hours weekend were from this era and if you've ever tried to run the old track on a computer racing game (like GT Legends) it becomes clear how cars and drivers must have suffered during a race on this 14-kilometre track. After 1970 various projects followed to eliminate certain high-risk zones but also to preserve the typical characteristics. By 1979 the length of the circuit was reduced to seven kilometres. Four years later, the Formula One returned to Spa. From the first edition of the Spa Six Hours back in 1993 the length of the circuit is almost unchanged. Since the layout of the new chicane the length of the circuit is now exactly 7004 metres.
The Six Hours Endurance race
Tradition was respected, with the Six Hours Endurance race beginning on Saturday afternoon with 108 cars on the starting grid. What followed was an exciting race during which the weather played a major role in the course of the race. Heavy rain disrupted the second part of the competition, resulting in many incidents and accidents, followed by a long interruption of the race. During the last half hour of the race, the weather gods were in a better mood and the battle for victory resumed.
With 12 Ford GT40s on the starting grid, the old Le Mans winner was again the most likely contender to win this race. However, this edition of the Six Hours race became a real nail-biter for the GT40s. Last year winners Voyazides-Hadfield, soon ran into problems with the gearbox, while the Ellerbrock-Gläsel-Kelleners GT40 suffered serious brake problems. A long pit stop for the Meins-Lillingston-Price team, a retirement for the Wood-Stretton GT40 at the height of the Les Combes and a retirement of the Lynn-Haddon equippe (due to the bad weather conditions), made that the pack of favorites was quite depleted. The battle for victory was between the GT40s of the New Zealander Roger Wills and teammate Briton James Littlejohn and the pole-starters Marcus Graf von Oeynhausen/Michael Funke. Despite a last attempt of the Germans (with an extremely fast Michael Funke behind the wheel), the team Wills/Littlejohn could claim their first victory in this prestigious race. The AC Cobra driven by owner David Hart, Nicky Pastorelli and Alexander van der Lof could be characterized as a reliable and strong competitor against the GT40s. The well-defined strategy of the team (Nicky Pastorelli as third driver drove under very bad weather conditions the last two and a half hours of the race), made it possible that they ended 3rd overall and 1st in class. The beautiful Aston Martin DB4 GT 'Project 214' driven by Friedrichs, Lindsay and Mallock, took the chequered flag in 7th place, while the Lotus Elan 26 R Shape Craft driven by Schryver-Schryver-Twyman once again proved Colin Chapman's philosophy of 'light is right'. The small car finished 11th overall, but won in its Class GTS10. An even more impressive achievement was the overall 13th finishing place of the MGB driven by Dutchmen Peereboom, Jasper Izaks and Britain Tom Smith.

FIA Masters Historic Formula One
This years FIA Masters Historic Formula One championship is really interesting as five drivers show more or less equal driving skills. Belgians Loïc Deman (Tyrrell 010), Christophe d'Ansembourg (Williams FW07), Andy Wolfe (Tyrrell 012), Jason Wright (Shadow DN8) and Michael Lyons (Hesketh 308E). Michael Lyons wasn't driving at Spa as he had other obligations (the BlancPain endurance race at the Nürburgring). Race 1 on Saturday was directly interrupted at the start when it started raining. The race was red-flagged in the opening lap, after which all cars changed to rain tyres. Deman took the lead followed by Christophe d'Ansembourg. The wet track prevented the drivers from any entertaining actions. The second race on Sunday, proved to be more straightforward, with Deman in the lead again, keeping D'Ansembourg behind. Andy Wolfe suffered a tyre blowout so he didn't finish. This means that the championship is wide open again at the final round in Dijon.

Woodcote Trophy and Stirling Moss Trophy
Another magnificent field of 53 cars representing 15 different marques was the combined race of the Woodcote Trophy and Stirling Moss Trophy. There were three Cadillac V8-engined Allard J2s, 4 Knobble Listers, 5 Coopers Monaco, 2 D-type Jaguars, several Lotus XIs and the stunning Ferrari 246S of Bobby Verdon-Roe. Fastest in Friday's qualifying session was the Minshaw/Keen Lister, which was more than 2.6 seconds quicker than Bobby Verdon-Roe in the ex-Phil Hill/Wolfgang von Trips/Rodriguez brothers Ferrari 246S. Third on the grid was another Lister Knobbly, driven by Tony Wood/Will Nuthall. Remarkable fourth on the grid was Dion Kremer in the 1216cc Coventry-Climax FWE-engined Lotus 17. The race was breathtaking with Minshaw's Lister chasing the Ferrari, now and then both cars changed position but finally Minshaw/Keen won the race by 9 seconds from the Verdon-Roe Ferrari. Kremer (Lotus 17) narrowly beat David Hart's Lister Costin by four seconds to finish third.

HSCC's Closed Wheel race
A fantastic field of 69 cars contested the two HSCC's Closed Wheel races at Spa over the Classic Six Hour weekend. The first race on Saturday was by far one of the most exciting races of this weekend. A close finish as father and son David and Sam Carrington-Yates (Chevron B16) beat Martin O'Connell (Chevron B8) by 46-thousandths of a second! O'Connell won the Sunday race, second was Joe Ward driving the Vauxhall Firenza Baby Bertha.

Masters 70s Celebration race and the Mazda R100s
The Masters 70s Celebration series allows a great variety of touring cars and sports cars from the seventies, a period of racing when touring car development moved swiftly forward from Group 1 to Group 2. Allowed are Ford Cologne Capris, Escorts and BMW CSLs to tackle the earlier 3-litre Capris and Triumph Dolomites, while Morgan +8s and Porsche 911s head the sports car pack. At Spa this series was combined with the HTCC and German DRM Pokal. Chris Ward led most of the race in his HTCC-entered Broadspeed Capri, but in the final lap he drove into the pitlane and the engine stalled because the petroltank was completely empty. Ward pushed the car through the pitlane to reach the timing beam ! Willy Toye (Triumph TR8) won the GT class while Belgium Mazda RX-3 driver Gust van Haelst took touring car honours.
The RX-3 was not the only Mazda with a rotary engine in this race as there were two type R100s from Japan. These two 1970 race-spec Mazda R100 Rotary Coupes are owned by 68 year old Jin Kato. In Japan he is renowned for being an historic racecar enthusiast and collector. In July 1969 the Mazda factory entered two R100s in the famous Spa-Francorchamps 24-hour race. The Spa R100s ran with their Cosmo type all-aluminum 10A engines. By this stage the 10A peripheral ported engines were capable of 200+hp, but the Spa engines were held to around 187hp for endurance reasons. Still the small R100s put in a big performance to finish a very respectable 5th and 6th overall behind factory 911s Porsches. For the 1970 Spa-Francorchamps race, an R100 finished again in 5th place. That was the final year that the R100 was entered by the Mazda factory for racing in Europe. Jin Kato bought his second R100 in the late seventies and from 1984 he started competing in historic racing events. During the years he also steadily worked on modifying the car to meet 1970 Spa specifications as it was his dream to drive his rotary R100s at Spa. By the end of 2014 he was finally prepared to fulfil his dream.
Both R100s were shipped to Belgium and arrived at the Port of Antwerp in early September.
Mazda Belgium assisted with the transport to the circuit paddock. Here the cars and drivers joined the paddock facilities of the local team, "Mazda Racing Team Van Herck" to prepare the cars for the race. Kato shared the white-green R100 with Eiichi Sugiyama who manages a garage that specializes in cars with rotary engines. The white-red R100 was driven by Mazda's General Manager of Design Ikuo Maeda and Belgian Xavier Daffe, a local journalist and hobby-racer. The two R100s completed the 30-minute qualifying session with some problems as they had to alter the suspension and re-position the engine to get a Historic Technical Passport. The R100 driven by owner Jin Kato passed the finishing line without a hitch, but the other car, driven by Ikuo Maeda, spun out on the high-speed climbing corner of Eau Rouge. The nose of the car was badly damaged but Ikuo was able to restart the engine and get the car back onto the course. In the pits some emergency repairs were carried out and the car was handed over to Xavier Daffe. Also this car would finish the race.

HGPA
The Pre-1961 and Pre-1966 classes were combined, resulting in a starting grid of 53 cars.
Some special entries have to be mentioned like the ex-Fred Agabashian 1954 Kurtis 500C 'Merz Special,' a former Indianapolis-500 racer owned and driven by Welshman Geraint Owen. Tom Dark's 1945 Bugatti T73C ran well in race 1 but in race 2 the engine had a backfire resulting in a exploded inlet-manifold. Nigel Batchelor's 1954 V8-powered Kieft ran better than last year. There were two Talbot-Lagos, the 1948 T26C from Dutchman Luc Brandts and Richard Pilkington's 1937 T26SS. Miles Griffiths (Brabham BT4) set the pace in Friday's practice session with a laptime of 2m45.349s (152,45 km/h). Second was Peter Horsman (Lotus 18/21)within a second. Saturday race, Griffiths let the field from the start and in the next seven laps he extended his advantage more and more. But after lap 7 the Colotti gearbox got stuck into fifth gear and it was Peter Horsman who took the chequered flag 6.1 seconds before Griffiths. For the second race on Sunday the gearbox of the Brabham was repaired and Griffiths drove a brilliant race building a lead of 36 seconds over Horsman.

Masters Gentlemen Drivers Pre-66 GT
Just like the previous years the Gentlemen Drivers race is the last race of this event which makes it a bid of an underrated race as many visitors and racing-teams have already left the circuit and I was the only photographer at Les Combes!. James Cottingham/Tim Summers (Daytona Cobra Coupé) led the first 40 minutes of the 90-minute race, but the entry of the safety car caused them to fall behind. The reason for the safety car was that Belgian Marc Valvekens lost control of the Lotus Elite. The car's fibreglass body suffered severe damage but fortunately the driver was unhurt. Michael Gans and Andy Wolfe took the win in their AC Cobra, beating a similar machine of Dutchman Karsten Le Blanc and Britain Greensall. German Count Marcus von Oeynhausen took third position in his Jaguar E-type. Ron Maydon/James Hagan finished fourth overall in their tiny Ginetta G4R, a remarkable achievement!

In twenty-two editions of the Six Hours Endurance race, no less than thirty-five different drivers have found themselves on the top tread of the podium. The first winners were the Germans Reis-Hoppermans and just one Belgian team won the Six Hours in 1994. Topping the hit parade are the British drivers Simon Hadfield and Martin Stretton. Claiming his first victory at the foot of the Raidillon in 1997, Hadfield added four additional successes in 1998, 2005, 2012 and 2013. This year he was joined by his fellow countryman Martin Stretton who had four victories to his name and added the fifth victory this weekend. I'm already looking forward to visit the Spa Six Hours event next year!