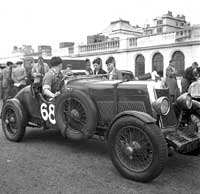 In bringing my finances back to a reasonable state of equilibrium, I parted with my 4 1/2-litre (black label) Bentley and even more reluctantly my Hyper ‘Leaf.’ The Bentley suffered noisy piston-slap which was not uncommon in large old cars of the period, but my ‘Leaf’ was what one would call ‘shot’ or almost so, and I had neither the money or the time to give it the attention it required to bring it back to health. Nevertheless even in those days it was a relatively rare specimen with its over-head valve Meadows power unit and Cozette super-charger and it fetched a good price. After the war which was to followed, I came across the same car at Brighton Speed Trials in 1946. It looked and sounded very good and performed as it should. I was pleased to obtain a photograph, but missed the opportunity to speak to the current owner and get the story of its renewed life since it left my possession. I originally purchased it from a Mr Mangaletzy in Manchester (UK) who was something of a Lea-Francis specialist and used his cars in competition quite successfully. I had previously owned an older 1 1/2-litre unblown model, but this old horse I blew to bits one day on Bransdale moor upon the Cleveland Hills through over-driving, I abandoned the car and for all I know it may still be there or at least parts of the crankshaft and casing which were strewn across the road and into the heather.

Lea and Francis was a Coventry firm which in the beginning started making bicycles, later in 1903 they started manufacturing cars.
Production models were built under license or built up from components supplied by other manufacturers. In 1926 they introduced the 12/40 range of better performing cars and capable of 70mph and these provided the basis for their high performance ‘Hyper’ model. Introduced in 1927 the Hyper-Sports used the outstanding 1.5-litre Meadows engine but with Cozette supercharger vertically mounted behind its distinctive sloping radiator and were capable of 90mph. Whilst not spectacularly fast they built up a reputation in competition for high speed reliability in various events both in the UK and Le Mans. Kaye Don won the 1st of the Ulster Tourist Trophy races in his 1.6-litre ‘Hyper’ in 1928, establishing the car’s name in the mind of motoring enthusiasts. This particular car was purchased from Kaye Don in 1930 by Terry Delaney for his son Tom to race, Tom Delaney today at 94 years of age still competes with this very same car 76 years later in historic racing events in the UK.
Tweet
Print Email
Rate this item
(0 votes)
Read 4538 times Last modified on Thursday, 07 April 2022 09:21
« Memories of Vintage Motoring - Lancia Lambda More in this category: Licorne »