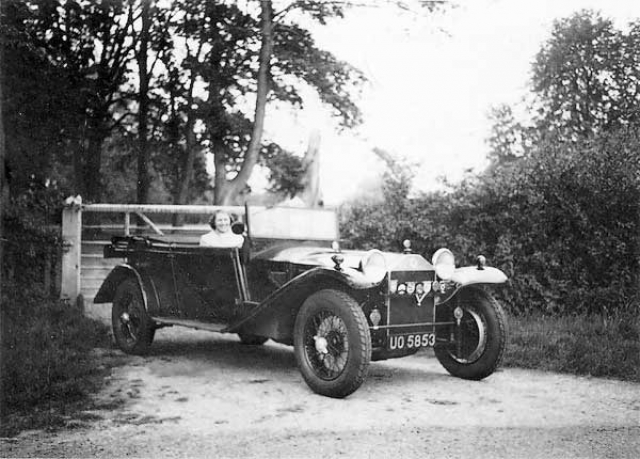 Edited extracts by MartinStubbs from the unpublished autobiography of Dacre Stubbs.                                                                                                                                                                        My old friend Granville Grenfell loved and rode motorcycles right up to an advanced age, although at the time I knew him best his principal mode of transport was an ancient 2nd Series Lancia Lambda. It had a very long and angular saloon bodywork which resembled a greenhouse on wheels rather than an automobile. The upper section of the body was, in fact, a detachable hard-top called a “ballon”.
Nevertheless its appearance was deceptive for he kept it in immaculate condition to the effect that it was capable of reaching 70mph, about 10mph more than the manufacturer ever intended. These earlier models could never be described as anything like good looking by modern standards, but were stately, like a hearse. In my rather naive view they were about the ugliest cars imaginable and yet one of the finest cars ever built. The “greenhouse” continued as an option until the 7th Series but the quaintness continued right through the Lambda production. Lancia produced a new model of the Lambda breed almost every year from the 1st Series in 1923 until the final 9th Series, of 500 cars, in 1931.. The performance of these cars was well ahead of their time. Lightness of engine and chassis had something to do with this, but the main factor for success must be credited to the engine and transmission design. They were large cars, with a very long wheelbase and immensely strong despite their lightness. If I tell you that the front seats of some saloon versions were comfortable basket (cane) chairs you will appreciate that nothing was spared to keep the weight down. Amongst the more unique features was its very innovative and well-designed independent front suspension, the chassis-cum-body in one unit and the light aluminium engine in which the four cylinders were staggered in a narrow ‘V’ formation enabling the crankshaft to be kept extremely short. In fact the engine with its overhead camshaft was utterly efficient, smooth running, powerful and like all Vincenzo Lancia designs, well ahead of its time. The later series Lambdas had one of the best gearboxes I have ever handled and in fact the whole transmission has been much sought after for use in many ‘specials’ because of its lightness, strength and reliability.

The model that I eventually owned and brought out to Australia in 1948 was originally an open ‘Ranalah’ bodied 8th Series Lambda. Alas this Lancia suffered severely after its wartime open air storage in the ‘Birches’ farm yard next to our cottage. Chickens and rats had made their home and what was left of the upholstery and the covering tarpaulin had largely rotted away. Therefore I began stripping away all software down to the steel chassis. The next job was to renew all electrical wiring and check the mechanical parts for wear or corrosion. I found an excellent ‘fold flat’ windscreen from a scrapped early SSK Mercedes, and then designed an entirely new body in a four seater sports style which would look ‘racy’ within the vintage tradition. I made a new body frame in good quality Ash and then sought the help of a body panelling expert to mould out the aluminium skin.

By the time I had completed painting the body Alfa Romeo bright red and designed an appropriate hood the car looked really something special. The original exhaust system had completely rusted away so I made up a Brooklands type silencer to which I fitted a massive 2 1/2 inch copper exhaust pipe running up over the rear mudguard and fastened to the outside of the bodywork, an idea copied from Peter Clarke’s veteran G.P. Mercedes racer.

I also replaced the old steering wheel with one I had kept as a spare from a G.P. Bugatti. When kept brightly polished the exhaust system looked and sounded like some record breaker and collected a good deal of attention both from the public and the police. In retrospect I have to admit now that all this may not have been in very good taste, particularly from a ‘purists’ point of view. But it gave us many years of enjoyable motoring in one of the most basic vintage cars which one could wish to own, even if the new styled body was a little flash.

Indeed it looked good and performed extremely well both in hillclimbs and straight sprints, being quite capable of cruising at 70mph and reaching a maximum 90mph which would be well above what Lancia intended for this model. Altogether this excellent car took us to a large number of motor sporting events such as the Annual Brighton Speed Trials, Shelsley Walsh and Prescott speed hill-climbs, and other meetings principally connected with the Vintage Sports  Car Club of which I had been a long time member. The Lancia was also used to tow ‘Twink’ Wincop’s Type 51 G.P. Bugatti to these events, carry spare parts, extra wheels and churns of fuel in the spacious rear section.

‘Twink’ would comment about his somewhat temperamental Type 51 that “it had never gone so fast as when being towed by the Lancia”. However the Lancia was hardly competitive in some events because of its considerable age and any excessive activity could produce trouble with the engine which really needed a complete and costly overhaul. As soon as the revolutions were pushed up water entered the cylinders with the result that more steam than exhaust gas passed through the copper pipe.

After migrating to Australia along with my beloved Lancia in 1948, it was soon sold to make way for a more appropriate vehicle for a growing photographic business. It was not seen again by me until 1956 when it appeared in a used car yard near the intersection of Warrigal and Dandenong Roads, Oakleigh, Victoria. As a family we discussed the possibility of buying it back and returned to the car yard for a closer inspection and a test run. The rear bodywork had been chopped with a MG slab-tank installed. Checking the tank for fuel we noticed it was dry, the dealer grabbed a tin of petrol and proceeded to pour in the contents. Imagine our surprise when a growing puddle appeared under the car. Further investigation revealed that the tank was a dummy with large holes in the bottom. This was not a good omen and the Lambda engine had been replaced with an early six cylinder Holden, it still handled like my old car but I felt that it had been ‘mucked about’ too much and lost much of its charm. In retrospect years later it could have been saved but at that time I was too disappointed to buy it back.

Granville Grenfell was of course my inspiration for purchasing my Lancia and he always had an extensive stock of spare parts, particularly for the earlier series, plus the know-how for working on the car to achieve top performance and reliability. By the time I had to part with it in Australia, it had exceeded 500,000 miles and apart from a new radiator, some new valves and valve springs plus replacing a cracked cylinder head, (a spare I brought out from England), the car never did received the major overhaul it needed. All of which proves that Vincenzo Lancia like Andre’ Citroen and Ettore Bugatti knew something about car design and impeccable workmanship.

In 1928, during the 8th Series Lambda production, Lancia designed a completely new car with the recognizable front end characteristics, but there the likeness to the Lambda’s monocoque construction ceased. It was a majestic vehicle having a separate chassis on which was placed a beautiful coach-built body, in some versions capable of seating in comfort up to eight passengers. The engine was likewise of a new design with two banks of four cylinders arranged in a narrow ‘V’ configuration of 24 degrees. It was called with some justification the Di Lambda and as I had the pleasure of being a passenger in one such car at Selsden Park, I gained the impression of having a ride in a very fast hearse. After some 1700 examples were built, production of the model ceased in 1935. It did not match the ostentatious excellence of Ettore Bugatti’s ‘Royale’ but was nevertheless a magnificent automobile worthy of more acclaim than it actually achieved.


Editor note: My father never believed that the facts should get in the way of a good story and should be indulged for romanticizing the past and forgiven for any inaccuracies.
Also I would like to acknowledge the assistance of Bill Jamieson for checking the details of the Lambda history.
Tweet
View the embedded image gallery online at:
https://www.motormarques.com/community/marques/item/93-memories-of-vintage-motoring-lancia-lambda#sigProIda14d0e9588
Print Email
Rate this item
(0 votes)
Read 6047 times Last modified on Thursday, 21 May 2020 19:58
« Lagonda 1935 Monte Carlo More in this category: Lea-Francis Hyper-Sports »