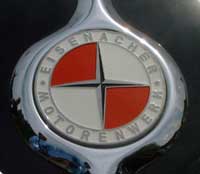 When the Second World War ended the main BMW factory at Eisenach was in the Eastern Sector and was nationalised.   Production of the Pre-war BMW 321 2-door saloon with the 2-litre engine was continued under a consortium called Awtovelo.  It was developed into the Type 327 and by 1952 became the Type 340

The 327 cabriolet also continued to be produced and both models were made in significant numbers, about 68,000 being delivered in the first year, mainly for export.  By 1952 BMW had forced the consortium to drop the BMW badge and for the last 4 years the cars were badged EMW.


From 1956 the factory at Eisenach took over the production of Wartburgs which were derived from an up-dated version of the IFA F9 which was State owned.