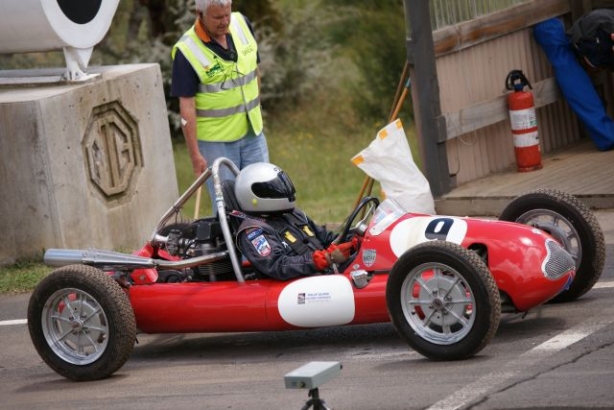 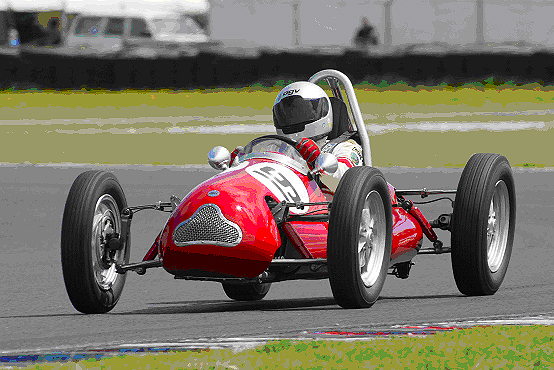 (Restored to original specification in U.K. by Bernie Allen)

PROVENANCE  Manufactured by Cooper in 1953 (Car #3) this rear engine air-cooled vehicle is somewhat unique in having a 1:1 differential,a specification confirmed in writing by the late John Cooper as factory-fitted.
The car was originally owned by Mr. Les Stone of Basingstoke, U.K and used in hill-climb and other closed circuit eventsduring the 1950’s & 60’s in the United Kingdom and Europe at such venues as Firle, Mansetter, Trengwainton, & Wiscombe.
A later owner fitted a Hillman Imp engine exclusively for hill-climbing during the 1970’s.

In 1995-6, it was restored by Mr. Bernie Allen of Wiltshire U.K, a noted Norton motorcycle restorer and replica builder who, in carrying out a general restoration of the car, returned it to its original engine specification vis. a Manx Norton
single-cylinder 500 c.c unit, with which it is currently equipped. Bernie Allen competed with it at the Inaugural Goodwood Revival Meeting in 1998, and won the National (U.K) 750 Formula Championship in 1999.   Imported in 2000 by the current Phillip Island-based owner, it is the only example of a Mark VII existing in Australia, and is run regularly in historic hill-climb, sprint and circuit events. Winner 500cc Class Rob Roy International Challenge 2007
with a time of 29.78 seconds..
Maintained in racing condition by Ten-Tenths Engineering, Boronia.

GRAEME NOONAN
I first became aware of #7353 late in the '90s from afeature article in UK "Classic Bike" on Bernie Allen, a noted Norton restorer and replica builder, who had just finished it as his first car project. I had been running a Norton 650SS in historic bikes for about ten seasons, and in addition to a life-long passion for Nortons (a favorite uncle owned one when I was a child), I had also loved Cooper air-cooleds since I followed Lex Davison in the Irvings and watched Murray Rainey in the modified Mk IX at Albert Park in the mid-50s. A friend took me along to the first Goodwood Revival meeting in 1998 where I saw the car in the flesh for the first time.

Soon after my return to Australia, I found Bernie was offering it for sale after winning a couple of 750 Formula championships, and after almost a year of negotiation, I bought it.

In 2000, I went over to take delivery from Bernie, and imported it soon after. I remain in contact with Bernie who has helped
out with tips and still keenly follows the car.
I am about to send him a photo of it he has requested of Sir Jack Brabham with the car at the recent VHRR Presentation Dinner where the organiser David Palstra displayed it after Rob Roy. He is also thrilled it will appear at Albert Park.
When Garry Grant was Victorian State Manager for CAMS, he also had the car displayed in the foyer of the Frescia Azzura Club for their 50th Anniversary Dinner in 2003, also the 50th anniversary of the car. On that occasion,
I sat at the same table as Diana Davison-Gaze and told her the reason I had the car was thanks to the exploits of Lex who was my boyhood hero. Charmingly, she said "He was mine too".

Gary also had the car down in Geelong for the dedication of the monument to Murray Rainey on the Geelong Speed Trials site Joy Rainey (also an air-cooled owner) and her mother came out from England for the dedication and was photographed in my car for "The Advertiser".

David and I are entered with our respective air-cooleds in the Masters Games hillclimb at Camperdown in February, then I will run my Lotus TwinCam 7 at Phillip Island in Group Sc in March (just got an "e" from Mike Byrne who runs a similar car - usually up at the pointy end - to tell me he has just finished rebuilding the gearbox of mine, then the GP in the Cooper. After the GP, Lindsay Urquhart has agreed to loan me an Amal GP carb to fit to the Coooper to try to correct sluggish performance of the start, caused probably by the relatively poor performance of the Gardner slide carb low down. It never bothered Bernie Allen, who only ran circuits, but since (apart from the odd mid-week meeting organised by Gary Simkin, air-cooled owner and editor of the very appropriately named newsletter dedicated to them "Loose Fillings" and GEAR at Wakefield Park) there are so few proper races for small capacity air-cooleds, I usually only get to run sprints and hill climbs. It willrun however at the Easter bike meeting at Broadford where they are laying on a couple of air-cooled races as demonstrations, but I'm not sure whether it will be with the
Gardner or the Amal in place.
I used to run Regularities with it at the Island and Sandown (it also led the parade at Sandown a couple of years ago for the Coooper factory Anniversary), but probably for reasons of speed differential, they insist on putting it in Pre-War, and I get bored passing and lapping all the lumbering giants except for the odd ERA. International Formula Junior Chairman (and former UK 500 Club President) Duncan Rabagliati had a guest drive of my car at this year's Island Historics, and I am always happy to loan it out for Regularity or anything else if I am otherwise occupied with the Lotus or my Group Nc Mini-Cooper S (the poor middle child which languishes at
the back of the shed; I really should sell it on so someone gets more out of it).

You might find the attached display notice for the car useful, along with the complete history of its activitywhilst in my hands. I alsohave some lovely b & w shots of the car competing at various hills inthe UK in the 50s, provided by a previous owner, Les Stone, butunfortunately I don't have them digitised. They will appear however onthe display board I am making up for Albert Park. Hope to catch up with you somewhere. Graeme Noonan. 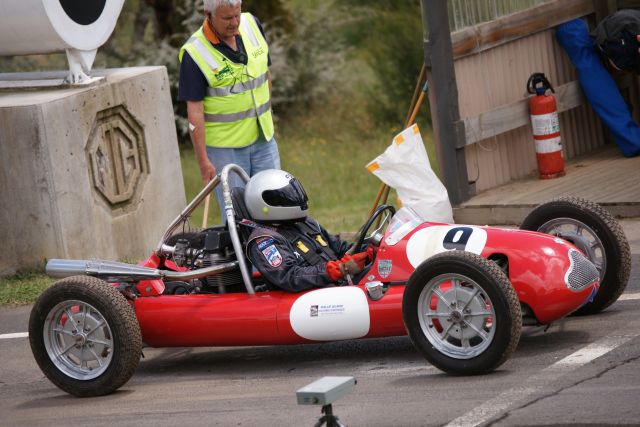