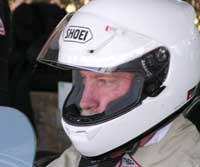 E.T. "Charlie" Mitchell  has been driving the green and silver TS Special for 14 years.

The car is powered by an overhead valve  4.7 litre GMC Staghound engine salvaged from a WWII armoured personnel carrier.

These engines were built in Canada for the British Army. As Charlie puts it - 'basically they're a  truck engine'. This particular one makes the TS Special fast and reliable.

It is the only car that Charlie has raced. It had been kept  in Western Australia since it was built in 1949 by Sid Taylor.