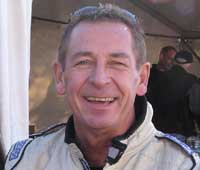 . .
Graeme Raper has been racing for 20 years 'all over Australia'. At present (June 2006) he is the owner/driver of a well-known Australian Special racing car called Monoskate, which has been in his family for 5 years..

This car was built by George Reed of Bathurst in 1948. Mal Reed raced it for a number of years in NSW, but so far Graeme has raced it in Victoria only.

The car is powered by a 4½ litre Ford side valve engine, and has never been off the track, although it has suffered dents and bruises over the years. The evidence of its long history of has not been covered up - so that the handsome bodywork bears its old war wounds like trophies.

George Reed and the Monoskate

During the 1940’s he made several Ford specials which he called George Reed Specials.

The last of the George Reed Specials was built in 1948. It was called the Monoskate  and was silver in colour - a colour that it has retained since. It has won many races over the years, beginning in 1950, when it won all three major races at Mount Panorama, including the 1950 Bathurst 100.