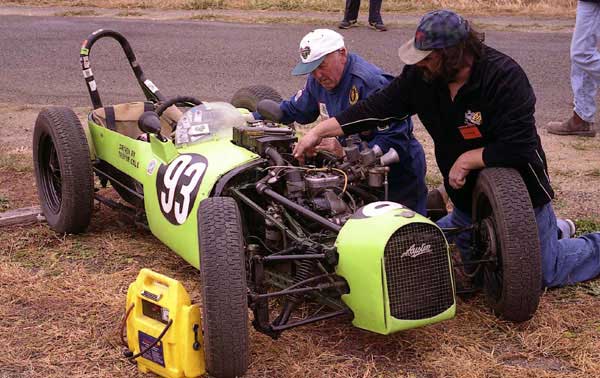 Trevor Cole and his bright green racing Austin 7 have been together for 35 years and when you see Trevor and the
car in the pits or on the track at historic events, they just seem to belong as a pair.   Trevor Cole

The best times in Australian car racing was ten years before and ten years after World War Two.  There was something special about it then.  It's not the same now, where such a big emphasis is placed on safety and crowd control.  It is necessary of course, but the concrete blocks and wire mesh barriers that surround motor racing circuits these days separate you physically and emotionally from the spectacle and inevitably bring to mind the East Berlin wall.

Paying customers used to be able to watch everything close up.   They could get a good photograph of the cars in action, and when the race was over, talk to the drivers.

Fortunately much of the old, traditional atmosphere still pertains to what we might call historic or classic car racing.

And there is no better way of recalling those days, than by talking to the racing driver, Trevor L. Cole - a survivor and a battler - still competing at age 90.

Trevor lives in the old dormitory-suburb of Springvale, Victoria.  His house is not all that easy to find, but once you see his big old Ford out in the street, you know you are in  the right place. It's the only house that has a big shed out the back - big enough to house a race car and workshop.  Many of the other old houses in the Springvale area are being torn down to make way for factories, supermarkets, and high-rise apartment blocks.  It's probably only a matter of time before they pull Trevor's house down as well.

Eleven o'clock in the morning is a bit early to come calling, but Trevor has coffee and a warm welcome waiting.  To make room in his small kitchen he clears space on the table that is covered with press clippings, magazines, certificates and the like.

All sorts of recollections come to mind."

That was the whole point of the exercise.

Trevor got his earliest motoring experiences on his father's dairy and poultry farm near the country town of Wonthaggi, back in the 1930s.  His father was a returned World War One man, who did not seem to have his heart in farm work.  On the property there was a constant need to bring in supplies of feed and other provisions, and to take produce out to the markets. So, under the circumstances, and at age 13, young Trevor had to take on much of the responsibility of running the place, which included  driving over farm tracks and rough country roads in a heavy Ford V8 truck that was not properly maintained and had practically no brakes. Motor vehicles in those days did not have ignition  keys, so it was a simple matter of getting in and switching on the ignition, " and away you went."  However, as he measured  5 foot 7 inches in height, Trevor did have trouble reaching the pedals. Other than that he saw nothing unusual in the life.

"All the kids could drive - cars, tractors, trucks, buckboards, whatever."

"Our old property is all divided up now, but back then it was an ideal place to learn and practice a whole lot of driving skills."

In his spare time Trevor became interested in radio.  He built crystal sets and one or two-valve radios. He stayed up late at night, listening to broadcasts from all over the world.

"The switch from crystal sets to radios with valves was quite a big step, and of course, as the sets got more complicated they needed the use of domestic 240 volt power supply, and that was a new dimension in complication."

Working with high voltages could present danger to an unwary amateur. "You got belted now and again, but you got used to it after a while."

"We used to have a magazine called "The Listener In" which not only listed radio programmes, but also included technical information for those who were interested in that kind of thing, and it gave you wiring diagrams and general instructions."

It was his Bible.

"And all the components were fairly cheap in those days.  During school holidays I used to go into town, and a lot of the radio people (he recalls that Veales, Homecraft, and other shops that sold wireless sets) and you could walk up and find a big tray of bits outside the door, and you would select what you wanted, and come home with an armful of stuff and incorporate it  into whatever you were doing.  You would get a transformer here, a valve base there, condensers, resistors, wire - everything you could think of that might come in handy.  There was a place they called Eastern Market that had good stuff. There were several markets in the area, and that coincides with the naming of Market Street."

He was selected to serve in the RAAF.  That was already a distinction, because the Air Force was considered by many as the elite service.

Trevor joined the Air Force in January 1942.  He was 18, but in retrospect, he considers he was still only a boy.

An exceptional boy.  He had developed the qualities of self reliance and ingenuity.  And, of the greatest importance, he could demonstrate a good working knowledge of radio.  He now thinks that these qualities were the reason for his being selected for the Air Force, which at that time was starting to work with Radar.  (RAdio Detection And Ranging)

"Maybe they already had the idea of putting  me to work with Radar - a technology that was very new at that time - because I had gained practical radio experience over the years. Radar worked with electricity.  It had valves, condensers, resistors and transformers.  It was familiar territory to me.  Electronics wasn't a word that was used in those days, but that is what we were doing, even if it was not at the level of sophistication it has reached these days. There were radar stations all up and down the coast of Australia.  Everybody knew they were there, but nobody knew what they were for."

The new recruits were given basic preliminary training in Melbourne and then sent to the Air Force base at Richmond, New South Wales in 1942.

"They sent us to Gabo Island 9 miles of-shore from Mallacoota, where there was a big establishment. Bass Strait was full of mines and Japanese submarines were lurking all along the coast."

Our working quarters were established in a concrete fortification overlooking the sea.  Power for the offices and living quarters was generated by a couple of Ford V8 motors. The main working area had a transmitter in it, a receiver, and other radio equipment."

Trapping enemy submarines, revolving wire gates for the use of

"From the outside, the the main distinguishing feature of the establishment was a big scanning antenna that swung backwards and forwards like a gate.  I think in fact it was a Cyclone wire gate, fitted with a dipoles - something like that."

" Another boy and I were on duty one night and I spotted an unidentified object about 4 miles out to sea.  We notified the mainland, and nobody had any information about any Allied vesels being in the area.  We watched the thing slowly turn around and proceeded northwards.  The people at Mallacoota were notified of its position, and at daybreak two Beauforts were sent out.  They found the submarine lying on the surface and they sank it."

"Some of the buildings are still there, I believe.  I visited the old Mallacoota Airport a few years ago and I spoke to an RSL  bloke looking after a museum that has been set up in a bunker there.  I saw the old V8 generating plant, and a few other bits and pieces that I recognised.  There were some photographs of the boys surrounded by penguins.  I remembered many of the faces, and I found my own picture as well."

After his time on Gabo Island Trevor was posted to Darwin, some time after the small city had been bombed to destruction  in January 1942. He worked mainly on maintenance of older aircraft such as Wirraways*, Avro Ansons, and  De Havilland Dragon biplanes of the 1930s.

"I had also acquired the capacity to improvise and make do, and that helped me during World War Two when I was in the Air Force, serving in Darwin.  I was engaged in repairing aircraft that were broken in a place that had very little in the way of facilities and equipment. People were totally unprepared for war. You had to be inventive and at the same time you had to be practical."

"If it sounds primitive now, you have to remember that at that time Darwin was considered a distant outpost of Australia, and people out there had practically nothing that could sustain a catastrophe like a major air attack.  One of the particular problems with old aircraft was that they were fitted with non-retractable undercarriage, and of course, they suffered badly under the rough conditions where they were operating.  Any stock that could be found was taken from salvaged wrecks already lying around. Howevweer, despite all the difficulties, we did become a pretty efficient force."

Australian radar stations would from time to time locate and organize the rescue of 'lost'  air crew returning from bombing missions around New Guinea.  The Liberators might be 2° or 3° off course, out in the Indian Ocean, and they would just run out of fuel.  You could see them on the screen as they started circling around looking for land, so you would ring up the Air Force base, and give them the information they needed to rescue the crew.  This was known as reporting an incident."

Another kind of circuit

Trevor remembered that he was a New Zealander.

"I met him once when he was working at 3AW.  His language was very colourful.  A brilliant man who was very good on radio but not as good on television.  He ran in the  Redex Trial in a Ford Customline that he had fitted with a radio so that he could broadcast his progress during the rally.  This was in the days before shortwave radio."

And the conversation got around to peace time motor sport, and post war racing cars and drivers. Names that can never to be forgotten came up. Yesterday's cars and races. The Maybach that Stan Jones  bought off Charlie Dean back in 1949. Frank Kleinig's Hudson Special that has been restored to better-than-new condition these days. Tony Gaze,Tom Sulman, Lex Davison, Alf Barrett, Hope Bartlett, Doug Whiteford, Bill Patterson, Alec Mildren, John Crouch, John Barraclough, George Reed ...

Trevor remembered Howard Compton Jones who ran an Austin 12 racing car during one of the early Phillip Island races. Howard also owned a Bugatti that he used to drive at breakneck speed around the suburbs, and a 1904 De Dion that had been owned by a World War One man who had gone away and not come back.

We remembered Puss Catlin who crashed in 1956 and was killed, along with a photographer who happened to be standing behind a straw bale that his car hit.

"The newspapers made a lot out of the story at the time."


* There is a Wirraway in the War Memorial in Canberra that actually did shoot a Zero down. It was actually the only ever one.