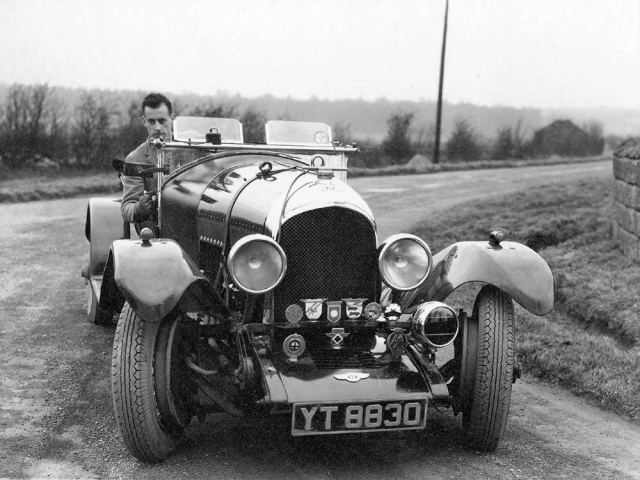 Motor trials and speed events continued to occupy much of my recreational time with fellow enthusiasts who shared my infatuation with interesting cars. Ronny Robinson the heir to the largest department store in Leeds, Methias Robinson, showed remarkably little interest in the family business and spent most of his time in buying and selling the best vintage sports cars he could discover. He also took an interest in motor racing as far as it was available in the North of England. I recall that he drove a Bugatti in races on the sands at Southport, well known in those days for the sport. Ronny became a very firm friend and obtained a number of Bentley cars for me and for which, I paid him if and when I had the money.
Bertram Morris was studying to become an Aircraft Crash Inspector and was serving his time between Vickers and Hawkers works and the Aeronautical College, all of them stationed in the grounds of the famous motor racing establishment of Brooklands between Byfleet and Weighbridge in the heart of Surrey. ever since our school days when we blasted around the country on motorcycles, Bertram and I remained loyal friends. His present car was a fine 2litre sports Lagonda and while he was at Brooklands he had a room at the Queens Head Hotel in Byfleet, renowned because of its proximity to the racing track and a second home for many of the leading motor racing fraternity, before and after race meetings. I had quite naturally read a lot about Brooklands and its activities, but Bertram wrote me regular letters about the place and its people, not to mention cars. After a brief visit and a night at the Queens Head, my appetite was well wetted and I was determined to become a Brooklands racing driver.

My next move towards fulfilling my new ambition was to purchase a modern racing car. I had owned a Bugatti previously and found them rather tricky and expensive to maintain. Frazer-Nashes, Bentleys and so forth were a little outdated I thought, and I was never in the millionaire bracket which cut out most of the continental giants. Moreover, I wanted to do more than just speed trials and hillclimbing. I wanted a classic sports car with universal potential for road as well as track racing. Although I nearly bought a type 35 Bugatti against my better judgement, because it became available at a bargain price. There was one other English car which I had never driven but had read a great deal about and seen it perform on a few occasions. This was an Aston Martin A‑ Model and so I paid a visit to the factory at Feltham, a little more then ten miles north of Brooklands itself. Yes they had one, not quite new, in fact only two months old, but it was in Yorkshire, of all places Bradford near where I had come from.