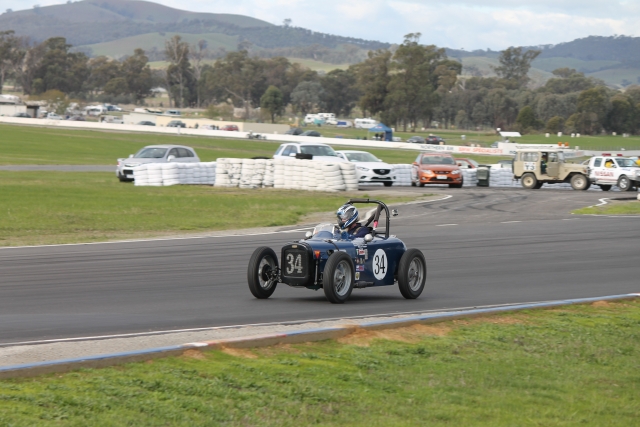 Fine Autumn weather, brilliant facilities, and a fabulous program of historic cars and motorcycles drew great crowdsto Winton Raceway inon 28 and 28 May 2016.
Winton is not far from the New South Wales/Victoria border, which is to say just under 300 km north of Melbourne. Our departure time from Geelong was 0830. At that hour, it looked like being a perfect Autumn day. We arrived at the circuit about 11.00, and as Bary Humphries usedto say 'We had a little trouble parking the vehicle, because there was the biggest crowd of cars and people I've ever seen at a historic Winton before. Evidently the historic car movements is growing in popularity. (But there was none of the big Television Circus that turns up for the great Touring Car events that have drawn spectators from all over the country.

The grand parade had just begun - including an interesting 'horseless carriage' - the Schact. This is an American automobile made some time between 1905 to 1908 in Cincinnati, Ohio.

Top to bottom, Left to right.