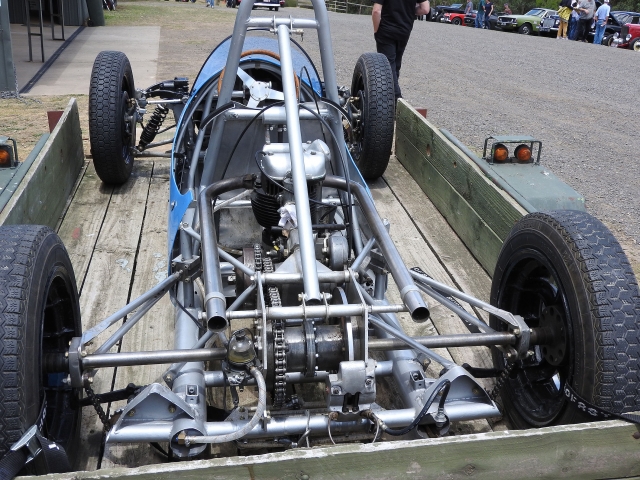 The Rudge Special.
Another car of particular interest, was the  little blue-nosed Special shown in our head photo. It has been featured before in Motormarques as the Sydney Rudge Special, owned by John Hazelden*. (http://www.motormarques.com/news/melbourne-desk/item/369-last-event-for-2009-at-rob-roy)
Martin Stubbs draws my attention to a feature of this car, that I failed to notice immediately. There is something unusual about the rear suspension set-up. Each wheel seems a to be connected to a length of 'bike' chain that disappears inside the works.There does not appear to be any kind of 'spring'.
What can't be seen is a bunched up coil of rubber bands that joins the two separate ends in the middle.
The rise and fall action of the wheels tensions or releases this coil.
(Imagine two separate sligshots tied together at their 'sling', and being pulled apart.)
Martin Stubbs adds the following:
"The car is one which you would have been familiar with in the past when owned by John Hazelden. It is the Sydney Rudge Special. As I was walking past later in the day I thought that car looked familiar, I spoke to a chap standing next to the trailer and said "I know that car it's the Sydney Rudge". He said that's right. I complimented him on the work that he had done, almost unrecognisable compared  with how it used to look. It was not in the programme  because it was there to be scrutineered so that he would know what was required in the future.
The standard of work was exceptional, particularly the body which used to be a mess. He agreed and said that it took hundreds of hours to rebuild.
All very interesting!"

The Rudge Special in its 'old' form has been featured before in Motormarques as the Sydney Rudge Special, owned by John Hazelden*.
* Author of the comprehensive - rare and valuable - book on the Chamberlain Special.