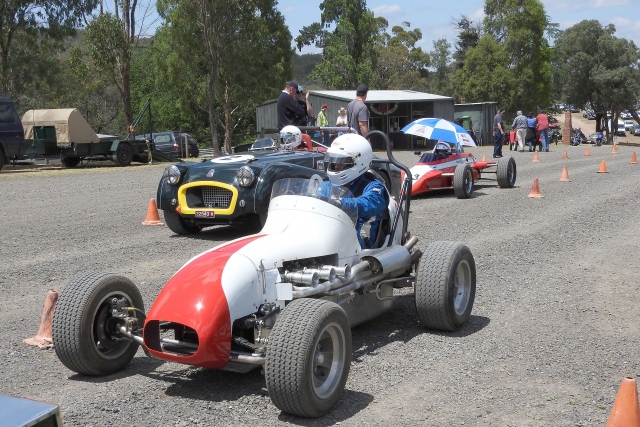 Rob Roy Speed Hillclimb.24th Historic and Classic Hillclimb - Sunday, 22 November, 2015.  By Bill Hunter (Coolpix P610 Camera loaned by Martin Stubbs.)
Rob Roy is on the northernmost edge of Melbourne.  On the way to Rob Roy, from Geelong, we journey out through places with names like "Christmas Hills", " King Lake National Park", "Snake Gully", "One Tree Hill Reserve" .  They're all fair dinkum names. At 8 o'clock on this Sunday morning, the sounds of city traffic and church bells were far away in the distance.  Now and again you could hear a big jet aircraft passing overhead on the way to Tullamarine Airport north of the city.
Bill Redpath had been kind enough to take me to Rob Roy in his Holden. He towed the Redpath Special (Car No 62) up from Geelong .  Later in the morning, he invited me to be passenger on a practice run up the hill before competition started in earnest.
Now there is a treat that doesn't happen to me every day.  The sheer power and thunder of the engine of his Oldsmobile Special was stunning. I felt that hooting and hollering would be uncouth in these august surroundings, so I kinda acted respectable. Cool. Hm.
Jim Russell was also taking a test run on the hill.  His race car 'Testa Plata' (car No 1 - Ford V8) was even noisier than the Oldsmobile. Jim is a few years younger than me. He has a big friendly smile.
Not far away Graeme Raper was warming up his Ford Monoskate (Car No16). He's a ball of energy and he drives the grand old machine as if it were back at Mount Panorama (Bathurst. It was first ever to do 100 mph on Conrod Straight.)
Also taking an early test run was Darren Visser, driving the Leo Bates Cyclo, car No 263. Darren is an energetic and graceful man who has been instrumental in revitalising many faded projects such as the Chamberlain Special, etc.
Trevor Cole, Guest of Honour of the day - was not competing today; his withdrawal from racing (at age of 90 plus) has only been recently announced. His Dale Shaw Special (Austin 7) was being driven today by John Marriot. John's usual Austin 7 racer was being driven today by Martin Stubbs. Trevor's history is recorded elsehere in Motormarques pages. Try to find it - it's a film script for the making. The famed Dale Shaw Specil is at present up for sale.
These cars and drivers all featured in the honors list at the end of the day.
The Public Announcement commentators need to be mentioned - they were fantastic - informative, experienced, and lucid. Praise also for the catering and the generak caretaking of the site. Rob Roy's significance honoured with care and respect.
I have to be honest.  I think that Hillclimb racing in itself is more fun for the drivers than for the spectators, but with the magnificent surroundings and with such an array of famous (and photogenic) drivers and cars - it's a swings and roundabouts sort of choice.