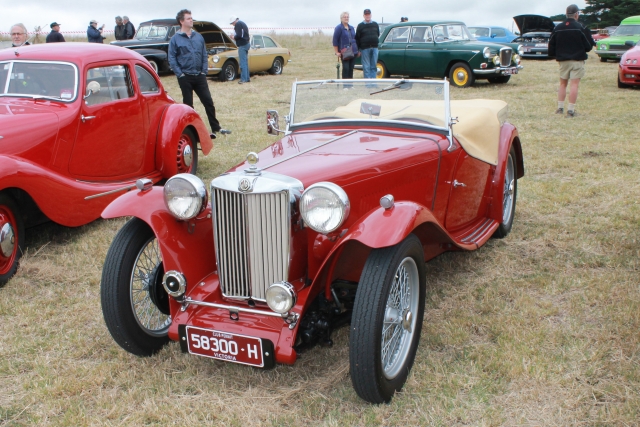 Myrniong Sprint - Sunday 12 April 2015Racing cars to 1960. Sports cars to 1975.  Touring cars to 1970.Clubman cars.Reproduction cars - &Specials to 1975 period.
Myrniong  is a town in Victoria, Australia. The town is located near the Western Freeway, 72 kilometres (45 mi) north west of the state capital, Melbourne and 15 kilometres (9 mi) west ofBacchus Marsh. Situated close by the Lerderderg River, at the 2011 census, Myrniong had a population of 221. The town is in the eastern area of Shire of Mooraboollocal government area.

Myrniong was named for the murrnong plant the Aboriginal word for yam daisy, a popular food source. European settlement began in around 1850 with local farmers producing wheat for hungry gold miners at nearbyBlackwood. Later production concentrated on beef and dairy.

Myrniong is known for its many bluestone buildings, including the historic Plough Hotel, established in 1859, and the Anglican church. Other attractions in the area include Pykes Creek Reservoir, providing water to themarket gardens in nearby Bacchus Marsh and Mount Blackwood, an extinct volcano offering panoramic views over the Wombat State Forest. and Werribee Gorge State Park An Historic Car Sprint is held in the town each April.
Tweet
View the embedded image gallery online at:
https://www.motormarques.com/news/melbourne-desk/item/679-myrniong-historic-car-sprint-2015#sigProId5d0f33a42f