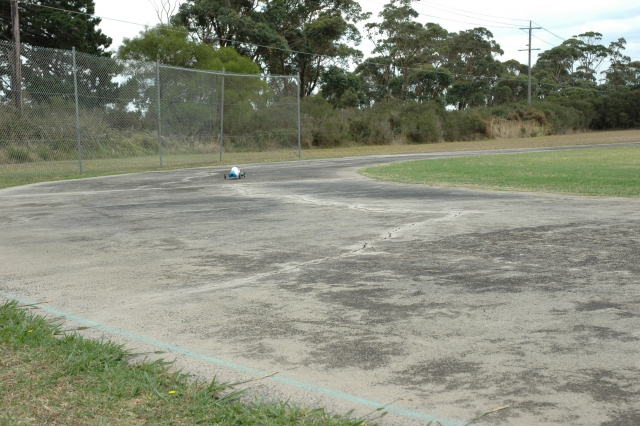 On Sunday 22nd Feb a group of guys went down to the Frankston control line field to run some old style slow fun Tether cars. It all started when a guy in Geelong, Bill Hunter built 2 old style Tether cars for fun, he has been building them over the last 15 years, but needed somewhere to see them run. He contacted Ron Savage our speed chief timekeeper. Ron has been trying over the last 10 years to get a track in Victoria, there are tracks, one in Sydney and the other in Bribane at Tingalpa, site of the next MAAA nats, but the track in Sydney will not allow you to practice the day before, only allowing 30 minutes total practice for all interstate entrants. You get 3 runs then go home, no way to encourage entrants, it is ok for the Sydney guys they have a practice day 2 weeks before the monthly comps. View video on  our Facebook page - https://www.facebook.com/william.hunter.50702769
Ron and I tried to get interest in getting a track in Victoria, but we found that most only want to collect, especially the old 1940's and 50's cars which get huge money on Ebay, the few modern international class missiles do not go for much.
Ron has two 5 cc modern cars as well as a novice class car with an OPS 21, we tried it years ago before we went to Sydney for the nats to make sure it ran, I just hung on to it as it went around ,it did 100kph then bounced upside down. This is the problem for the modern cars the surface has to be perfectly smooth and flat, car parks etc are no good, but the old style slower ones should be ok as they did it all the time in the old days.

On the Sunday Bill turned up with 2 carloads of family supporters to see the big event. He managed to get a few runs on the track with Ron in the centre holding the cable off the ground, but the cable it attached to the special pylon Ron built for our track??!!, speeds were around 70kph I think, Bill &family were very happy to see them run. He could have run more but he was happy. The cars were basically old Speedcar style body, powered by an os 46 LA and a LRP .28 r/c truck motor driving the axle by toothed belt, he had radio control for the throttle, a good idea .

Ron ran his R/C model car powered by an os 15, but no radio, this was an idea from the Sydney club for novices to get going easily, just buy an r/c car and put a tether on it, but idea did not take off, Ron built one but never ran it. I had a full r/c car I bought at a swap meet all up $100, with os 15, I left the radio in it as i have run it at  a basketball court a few times, I just added the cable attachment an ran it that way on the cable,starting the motor and I controlled the throttle while Ron held the cable. Normally the Horser holds the cable up of ground and whips it up to speed then jumps up on a little platform while car runs, but the grass stuck up too much and would catch on cable causing a run in. I was going to run my Novarossi .21 car with a small carby to slow it down as at top speed it would bounce too much but ran out of time /energy. I also flew my class 2 speed model Novarossi .28 to demo to the spectators.

I know this is not Aeromodelling as such but is all modelling. A lot of the motors we used years ago started off as Tether car motors  -Oliver Tiger /Dooling /mc coy etc.
We would like to thank CLAM-F for use of the field.