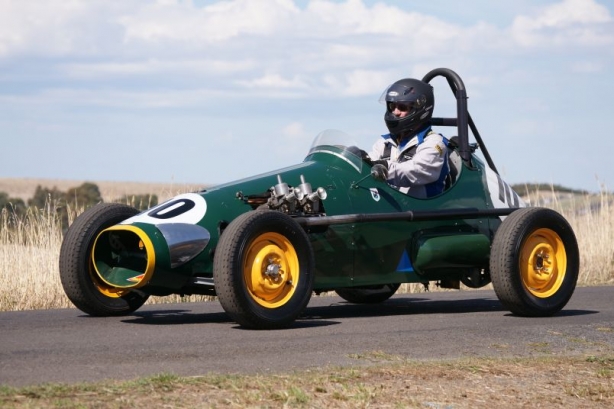 The car was built in 1956 in Newcastle NSW.  It was the third car built by Mick Nedelko, an 18 year old apprentice motor Mechanic, who worked on the car at his workplace (Morgan Jones Pty Ltd, Mayfield), at his home at Mayfield West and also at the Newcastle Technical College.

Initially the car was painted blue with silver Renault 750 front and rear wheels but Morris 8/40 wheels were used and some events.  The car originally had an Austin A40 engine and gearbox and the radiator was specially made.  The car used Renault 750 rack and pinion steering and an Austin A40/FJ Holden front end with a semi elliptic spring and telescopic shock absorbers.  The rear end consisted of a Holden diff centre-housed in a Fiat 1100 diff housing with semi elipticic springs and Armstrong dampers. The body was built of  steel (aluminium being too expensive!!!) and the chassis frame was built from a single length of solid drawn a steel over 20 feet in length.

After only 12 months, the motor and gear box were deemed uncompetitive and were subsequently upgraded with an MGA engine and gearbox.  The engine had a Wilkinson cylinder head, high top pistons with a compression ratio of 8.8 to 1 (super hot for the fifties!!!)

The car completed successfully in this configuration for a number of years and was clocked in excess of 110 miles per hour at the Gnoo-Blas circuit near Orange, New South Wales. In 1959 Nedelko competed in the car at Gnoo-Blas in the South Pacific Gold Star series alongside such greats as Brabham, Davidson, Myers, Lukey, Mildren, Gray etc. The car also competed at numerous events from 1958 including the Newcastle Hillclimb, Silverdale Hillclimb, Castlereagh, Nabiac and Cessnock airstrips and at the Tasman Series support races at Warwick Farm in 1961.

Nedelko acquired a PRAD Holden sports car in 1960 and sold the Nedelko MG Special to Apex Auto in Newastle.  Apex Autos entered the car in a number of events in 1961 engaging Mick Nedelko as the driver.  The car was then not seen in racing circles for a number of years.

The car re-surfaced in 1986 when Nedelko identified it under the house of John Davies, an old friend of Nedelko from his early racing days and also a fellow member of the MG Car Club. John Davies was in the process of restoring the car for the then owner Malcolm Bailey of Port Stephens. However, in 1990, whilst still in Bailey's possession, the car was destroyed in a workshop fire along with a number of significant racing vehicles. The wreck was subsequently acquired by Terry Hanly of Eukey via Stanhope, Queensland and sensitively restored over a period of 5 years. Terry then obtained a Cams Log Book and a Certificate of Description and competed the car at numerous events including the Noosa Hillclimb, Layburn Sprints, Guyra GP and New England GP.

The car was then acquired by John and Steve Anderson in 2006 who rebuilt the car, upgrading the engine to its previous MGA racing specifications, rebuilt the gearbox,
suspension, brakes and steering. John and Steve competed the car in Queensland and Northern NSW before selling the car to Bill Cowper in November 2011.

Bill intends to return the car as near as possible to its original form and to use the car in historic events in Victoria as well as running the car in club Hillclimbs and Sprints.