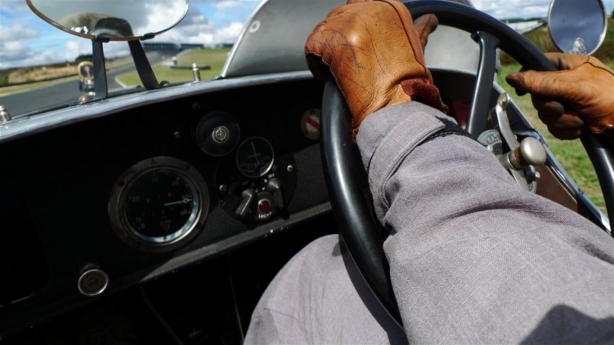 
Good Friday traffic heading south from Megapolis crawled for some 30 kilometres. I was vexed by the likelihood of carboned up plugs!

This anxiety was buried under a positive countenance as fellow travellers were resigned and good natured; there was much ‘reaching out’ to the old dude in the cute old car. Photo ops and quips there were a plenty. Clearly I wasn’t the cause of the holdup either … that was down to something going on way up ahead! This turned out to be congestion on S.H.2. So from Pokeno it was a comfortable sprint to my destination, Hampton Downs Raceway.

A few of our lot were already there. As too were a large group of young men and women who were flogging machines of vast horsepower around our ‘Pits’; their ‘Skid Pan’, with total disregard for cost! We grownups couldn’t hear ourselves think and it was a struggle finding breath in the smoke laden atmosphere … We were amazed at the resilience of their machines. Half your luck kids! We’d be emailing England for a container load of replacement bits if we attempted such manoeuvres. At 7 pm they pulled out and a glorious calm descended on this patch of concrete in North Waikato.

Forward planning was gone over. This our 3rd year of The Roycroft would run smoothly (and mostly it did). There were many returnees, and a number of new. There’s plenty about Easter Weekend that attempts to pull people’s attention so we were very pleased to get the numbers we did.

The weather was kind, though on Sunday, a potential audience believing ‘if it’s raining here it’ll be raining there’ stayed home.

Key to photos below:

Harry C Stutz was born in 1876. In 1915 his Stutz Motor Company built 3, 4.8 Litre cars: known as The White Squadron: They raced at Indianapolis that year. One of these came to New Zealand in the mid twenties. John Bellamore brought it up from Southwards. It is a blonde beauty and truly a star!

The other star visitor was the Ralph Watson, 1955 Lycoming Special. Its owner Ralph Smith brought it up from Christchurch. Mighty impressive to see and hear; it just seems to gobble up distance.

On track grids of pre 45 and pre 60 motor cars were augmented by demonstration grids of pre 63 motorcycles and pre 75 sidecars. Around the paddock a range of vintage/classic vehicles and in the pavilion exhibits of restoration and special building as well as some appropriate retail stalls.

Although the focus here is motorsport and motor vehicles I want to pay special tribute to the many people it involves: The organizers, the owners and drivers, the support people, the WAGS and HABS and the punters. That so many coalesce to make it happen has me more than a little awed. You can chat to a bloke about his horsepower or a sheila about her RPMs and poke your nose under a bonnet to check out the mechanisms, but look around and see who else is about: Those who marshall , man flags, analyse, commentate or those who make cups of tea. There are the doughty, the timid, the loquacious, and the taciturn and so on. You could not be disappointed. For a time there was a bloke named Rob circling and rolling his ‘Tiger Moth’ above the track.

Participation and passion are on display all over ‘The Roycroft’. Here’s to all the People!