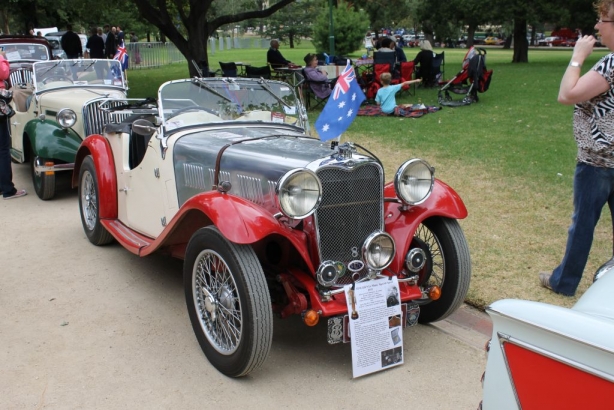 The Singer Nine in the top photo is a "Special Speed" of 1935.
It was delivered in 1935 in Melbourne for Arthur Beasley. The car was a multiple trophy winner including Golden Fleece Grand Prix on Phillip Island in 1938.
Specifications: 9 hp, 972 cc single overhead cam, 2 SU carburettors, Laystall crankshaft.
This Le mans is now in the custody of Trevor and Pauline Leach, having been rescued some 30 years ago in dismantled condition.

The GAZ 21 Volga (the black car top right) became the biggest and most luxurious car officially sold to individual owners in the USSR in large quantities, though its price was very high, making it unavailable for most car buyers.
This particular automobile was extensively restored in 2009 and imported from Estonia to Australia in February 2010. It is believed to have been at one time, a KGB vehicle in the former Soviet Republic.
The engine and interior are as close as practicable to original factory specifications. (You'll notice a bloke dressed in a sinister-looking black uniform just behind the car.)

The joker onthe pole:  Later in the day, when I was returning to Flinders Street Station to catch my train home, I came across a big crowd gathered round something or somebody apparently up in the air.
It was some bloke (he spoke with an Americanaccent) who had rigged up a collapsible pole that was now about 5 metres above the ground, and he was cavorting about up there and joking with  the crowd.
Apparently the Police had entered the spirit of the thing and were quite benign.

Minerva: Somegood information on this Belgian automobile can be found on -  http://www.minervacars.com/a/history
Tweet
View the embedded image gallery online at:
https://www.motormarques.com/news/melbourne-desk/item/593-australia-day-part-2#sigProId1ab19cfdc3