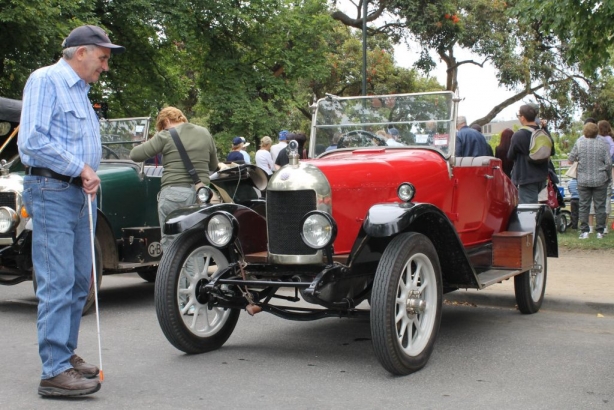 The photographs on this page were taken on land  that is part of the Kulin Nation. This territory was long occupied by aboriginal tribes -Wurundjeri, Boonerwrung, Taungurong, Djajawurrung and Wathaurung. The area is known tohave been an important meeting place and location for social, educational, sporting and cultural events and activities.
The City of Melbourne has occupied the land for a very long time, and has created a magnificent European-style tree-lined park called the King's Domain.
King George V's memorial stands guard over it in perpetuum, flanked by a grumpy-looking stone horse and an even grumpier looking lion. It may be that the City fathers felt the need to remind post-occupation citizens that their educational sporting and cultural celebrations did not always receive Official approval.
One celebration that ticks all Authority boxes happens each January 26. This is Australia Day. The leafy avenues that wind around the park are lined with glorious old automobiles that have played an important part in the city's development - all legally parked without other restriction than the participation fees for entry in ythe display.