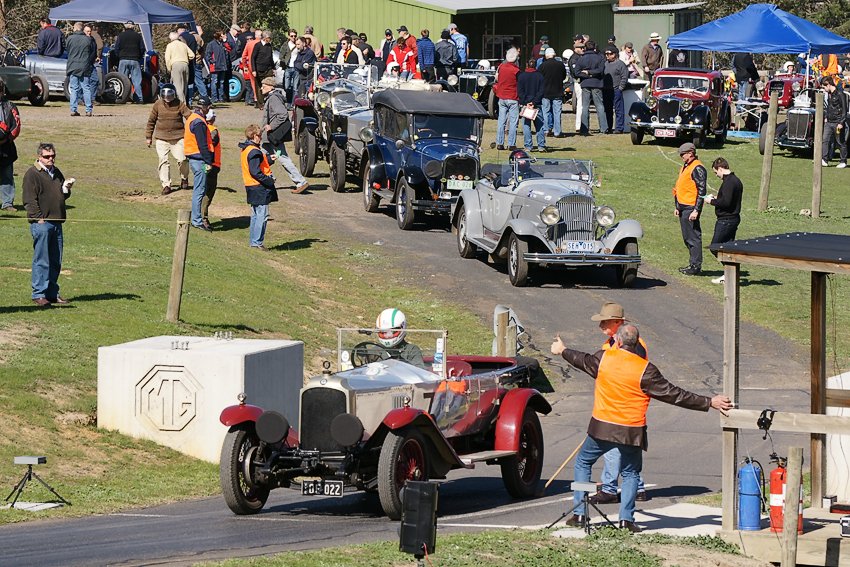 VSCC stages hillclimb on a crisp day
Photos: Richard Abey Text: Graeme Steinfort (see below) Recorder transcriptions: Bill Hunter To see video, click here * See below - John Kent's note on the amazing 1914 Talbot       Glen Bishop is going to Tasmania.
"The 50th anniversary of the Baskerville track, and the 50th anniversary of the MG club. They are putting on an all
historic meeting. My son in law is taking his blown MG TC, and we've made a double entry.for the two of us."
Freight for Glen's Wasp and trailer would have been $1400. No wonder they're taking only the TC.   Ken Bedggood - BMW. Chatter and laughter.   "How you doing, all right?"   Ken had gone up to Heathcote last Sunday.    Failing to understand that there had been a racing meeting there, I said, "What did you do up there?"   "Got wet."   "Did you have to go to Healesville to do that?"   "Heathcote, Bill.  Heathcote.  All the way to bloody Heathcote.  I wanted to have a run in the Cheetah. "
Greetings exchanged with Lindsay Urquhart.   "How's your bus going, Lindsay?"   "Good."   Lindsay drives in Class 17 – Air-cooled. His Anzani engined racing car. Car number 54.   "Anzani was an Italian guy who sold the engine to the German air force during the First World War, you know, and
after the war it was the British Anzani company who manufactured the engine for use in aircraft."   "Dellorto carburettor, 1100 cc displacement.  The chassis was made in South Africa.  It had a 1924 Indian motor at
the time.  The car went to New Zealand where the motor was removed.  The car was never raced. It was just stored
without its engine for 40 years.  It had lost all its wheels, and the motor, you know.  I'm using the Anzani engine
which was also made in 1924."
Beautiful engineering of the Anzani engine.  Comment on the starting process which involves pressing a 12
Volt doover against the rear wheel.   They can be a tricky bugger of things to start.   There are only two air cooled engine cars running today. The other one is John Cofffin's BSA 500cc car   Trevor Cole.  Mention of Bob Booth, which Trevor describes as "before your time".  Probably those responsible
for building Trevor's car.   "A big engineering joint alongside the railway line at Springvale.  They made engines.  They made pumps.
They made all sorts of things.  Then the company was taken over by somebody.  And that was taken over by
somebody else.  Sometime around  1939.  I applied for an apprenticeship there.  But in 1939 some damn fool
started the war, of course, and that was the end of that."    " Ah. "   Peter Matthews -- car number three.   "How's the Austin going?"   " Ah.  So so."   "I take it that makes very well."
"Well, we went to Winton back in May. It was intended to be a tuning exercise.  We went to Heathcote
sprints last weekend which didn't eventuate, because of the rain."   "Ken Bedggood was telling me."   "We all left about 11. 30.  I drove home in clear skies and hot sun."
Spoke to John Marriott and his son.
"Are you driving today, Alistair?"
"Yep, yeah."   "Do you have to put a number one in front of the racing number (**) already there?"(Reference racing
number of the side of the car.)   "Yep, yeah."
"I find it a very attractive car.  Is it a Brooklands?"   "It is supposed to be a replica of the factory car.  Whatever they call those. They may have been a little
wider in the body than this one."   "It's a really stylish looking car."   "It is. It has the usual Renault rods.  Heavy shaft.  Normal Renault pistons.  Ulster block.  Considering
the erosion in the waterways, I think it must be the original just hanging on."   We spoke of the Raid -- a visit by an English Austin 7 team some years ago.   "I didn't go there but I would have liked to.  I was very busy doing other things, and was temporarily out of the sport."       Mike Hipkins. The sound of a big old motor.  He looks up.   "They keep on going forever these old 30 -- 98 s, don't they?" (I need expert advice on whether it should be 30 -- 98 or 30/98)
Mike has to go to drivers' briefing.
John Laing of the Alvis car club who also has a car which I think is a 30 -- 98.
I met Brendan Dillon, driver of the Riley Kestrel.  Explains that he will be on the spoon today.
"Spoon?"
The starter spoon for the billy cart race.
"Centre of gravity?  Centre of depravity."
Allan Tyrrell, driver of the bodyless Austin seven.  Mention of John Tomlinson.  Warren Bonning.
Remember to check with Martin Stubbs about the Tyrrells' influence on his car.(Alan Tyrrell was
the original builder M.S)
John Lawson - car number 24 – Amilcar. 1928. Lovely, tight little black car. Often see him at sprints,
hillclimbs, etc. Very competitive 2 litre car.

Drivers' briefing. Got to go. 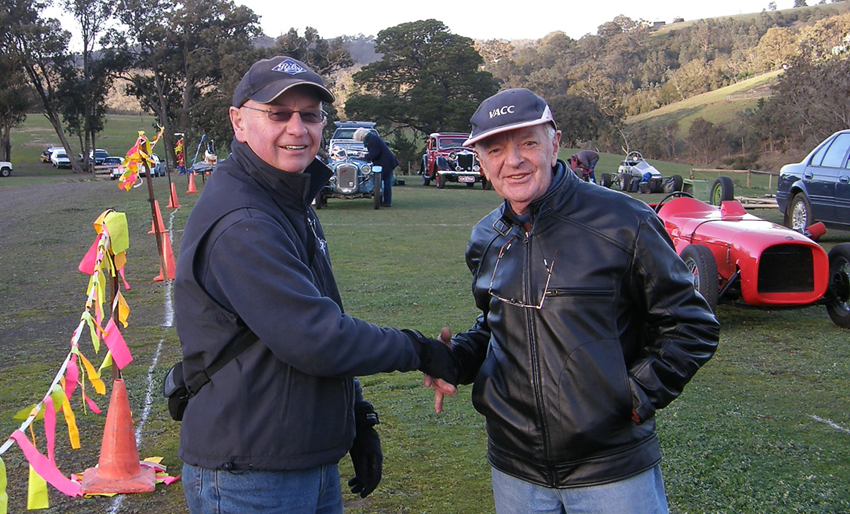