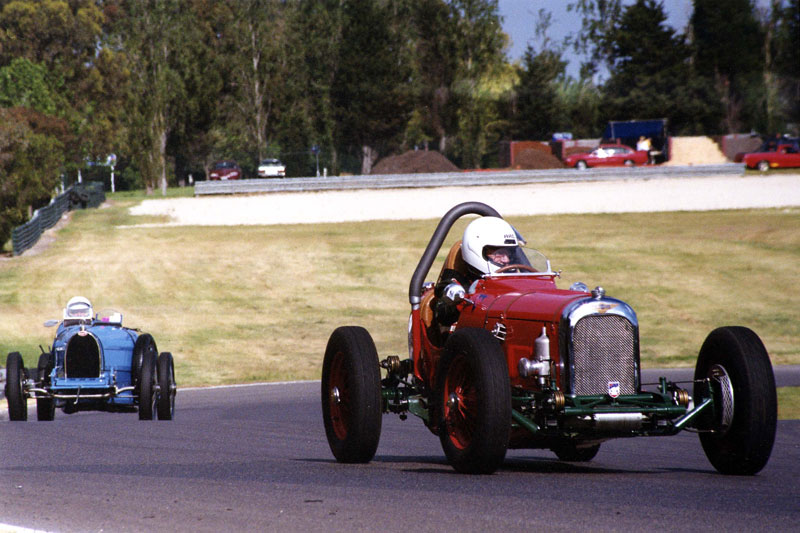 
It is a very fast car, and does the standing quarter mile in 13 seconds. It has been raced for several seasons by
Ross, who has recently sold it to a buyer in the UK. Ross's history with the Rapier includes Phillip Island, Winton,
Rob Roy, Tarrengower, Oran Park, and others, where it is well known as both beautiful and fast. Some records of
its successes can be found on the internet.

Boosted by a two-stage blower at 26 lbs, the Lagonda engine produces around 200 bhp. The car has a top speed
of 135 mph. In second (of four) gear, it is still spinning its wheels.  Front and rear tyres are 16 inch. Ross has not
been active in racing for a while following a motorcycle accident in the street not far from where he lives in Melbourne.
So the Rapier had been sitting idle in his workshop until January 2009, when he started it up for the first time in about
a year. It started up and ran nicely. But, sensing that not all of his neighbours were likely to appreciate the bellow of
the car's open exhaust, he kept the 'warm-up' session brief, even though it sounded tremendous.

Lagondas have been involved in car racing for over 100 years.

The marque was established by Wilbur Gunn, an American Opera singer from Ohio. The name Lagonda comes from
one of the rivers in his native country. Since the late 1940s the name has become associated with Aston Martin.
Tweet