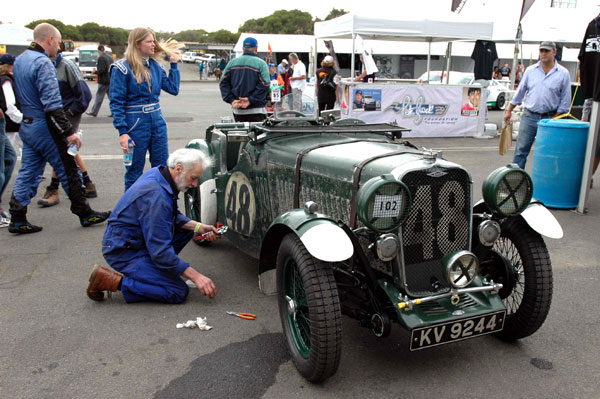 It is always good to go back to Philip island. It's a big island in Bass Strait, just off the Victorian mainland.
Cape Woolami stands like a granite sentinel on the east side and The Nobbies Lookout on the west.   Western Port Bay is to the north, Bass Strait to the south. A country road through rolling hills takes you to the Grand Prix
circuit, which for 80 years has been host to premier motor racing events rivalled only by the Mount Panorama circuit in
New South Wales.   Always brilliant, the Phillip Island historic motor races excelled themselves this year. Some of the rare machines making
their appearance were the 1955 Mercedes-Benz 300 SL Gull Wing, the Porsche 917/30 Spyder, the Bugatti T 39, the
ex-Nuvolari Alfa Romeo, and the 1934 Le Mans class winner Singer.   Patron of the Meeting was John Bowe, the only driver to win the Australian Drivers Championship, the Australian Sports Car
Championship and the Australian Touring Car Championship.   2008 marks the 50th Anniversary of Formula Junior racing. 46 cars including Taraschi and Stranguellini, Lola, Lotus, Brabham,
Cooper, Rennmax, Nota, Lynx, Elfin and others took part in the final of a series of events in New Zealand and Australia.   34 entrants in Formula 5000 events included 17 from New Zealand, 3 from the United Kingdom, and 1 from Monaco. They made
enough noise to make the entire field of J, K, Lb and Invited Cars sound almost silent, despite the presence of Riley Brooklands,
Bugatti, Singer, Alfa Romeo, Cooper Bristol, MG, and some brilliant Specials.


Alex and Stewart Webster
Alex Webster has produced some very high quality videos on the Phillip Island meeeting, and has now linked with Motormarques. His video of Regularity qualifying was taken from an inboard camera and is a must-see  for anyone who wishes  to get a good idea
of the entire circuit, and to share with the driver the experience of racing a fast sports car there.      Alex and Stewart's website is at
www.porscheclassics.com.au
Tweet