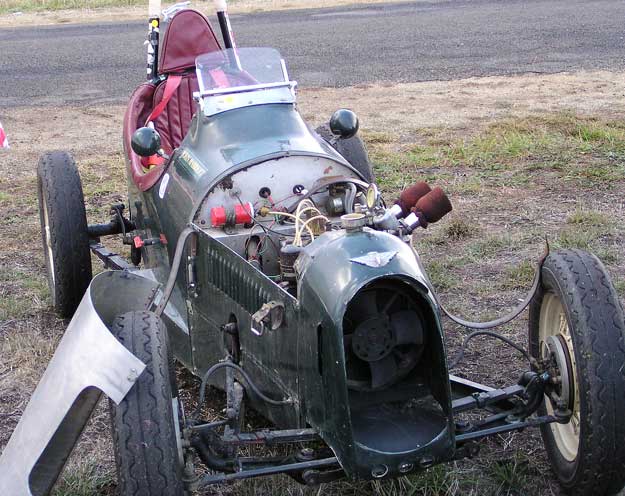 Text and photos by Bill Hunter. Videos below are by Darcy Dean and Bill Hunter
Myrniong Historic Sprint - Sunday April 22, 2007     Myrniong is a small country village 80 or so kilometres north of Melbourne at the foot of the Macedon Ranges. The hills around are steep, and the roads are rarely used. Over the last few years, the Austin 7 Club has made an arrangement with local authorities to close off the 3 km road to Korobeit so that they can hold a hillclimb for historic cars there. It's a bitumen road and the 850 metre climb is steep, rising 60 metres from start to finish. Although the event is covered by a CAMS permit, it is one of those well-kept secrets that are the joy of those in the know, and which allow visitors to wander around and talk to people, and get reasonably close to the action. Course facilities were good, and public announcements and quick reporting of times from the Seiko timer were excellent. 75 competitors turned up, with Austin 7 well represented with Glen Bishop, Trevor Cole, Martin Stubbs and others. Glen Bishop set Fastest Time for Austin 7 Racing in his Schultz A7, with a time of 32.6 seconds . MGs ranged from an N Type, a few Magnettes, Midgets , several TC Specials, A and B types, and a few Ls and GTs. Lotus, Riley, Bolwell, Elfin, Holden, Buchanan, Mini, Triumph, Austin Healey, Singer, Rambler, Honda S600, and Lagonda were all represented. A Ford Zephyr with a 5880 cc V8 engine made some good runs. Several replicas – Ford GT 40, Cobra and D-Type Jaguar - added fire and thunder. And at the other end of the spectrum, a stripped down T Model Ford and a bare-bones Oldsmobile V8 took the Historic affair back to its roots. Our video shows a few of the cars on the hill – aiming to reach Mick Hone's FTD in a Ford GT40 Replica, with a time of 27.5 seconds . Closest were Jim Russell in his Ford V8 Special (Car No 1), and Ray Sprague in the orange-coloured AMX. The event was reminiscent of the 1950s when many cars in racing trim were modifications of vehicles you could see in normal showrooms and traffic. Owner/driver ingenuity and dedication gave an aura to the sport that had appeal and glamour that was not dependent on media hype nor over-the-top expenditure. The Austin 7 Club got everything just right at Myrniong.
Tweet