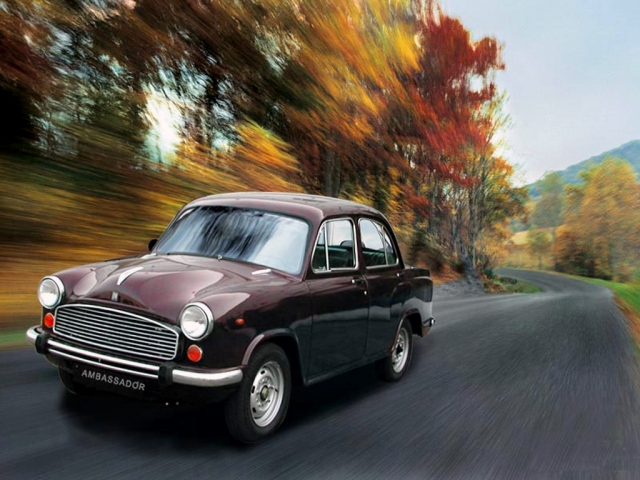 Production of the Ambassador, the first car to be made in India, has been halted. Based on the old Morris Oxford Series III, the production of the Ambassador began in 1957 and the overall design has changed little since it first went into production in 1957. The independent suspension and hydraulic telescopic double acting front shock absorbers made travelling on the rough Indian roads comfortable. The last years there were petrol, diesel and CNG versions available.
The Ambassador was once the only car driven by politicians and government officials, usually painted white with a red beacon on top and a chauffeur at the wheel. It’s still in use as a taxi in some Indian cities.There are 33,000 Ambassador taxis in Kolkata alone. The Ambassador began losing its dominance in the mid-1980s when Maruti Suzuki introduced its low-priced 800 hatchback. In the mid-1990s, it lost further cachet and market share when global automakers began setting up plants in India, offering their models with modern design and more advanced technology. The company sold about 2,200 Ambassadors in the fiscal year 2013, a small share compared to the 1.8 million passenger cars sold during the same period in India. In a statement last week, Hindustan Motors cited "worsening conditions at its Uttarpara plant which include very low productivity, growing indiscipline, critical shortage of funds, lack of demand for its core product the Ambassador and large accumulation of liabilities." There's great nostalgia about the Ambassador in India. For many, it's the first car their family ever bought. In 2013, the Ambassador was crowned as the best taxi in the world by BBCs Top Gear, where the Indian taxi outclassed it’s rivals from Britain (black London cab), America (Yellow cab), Germany (VW Beetle) and several others.